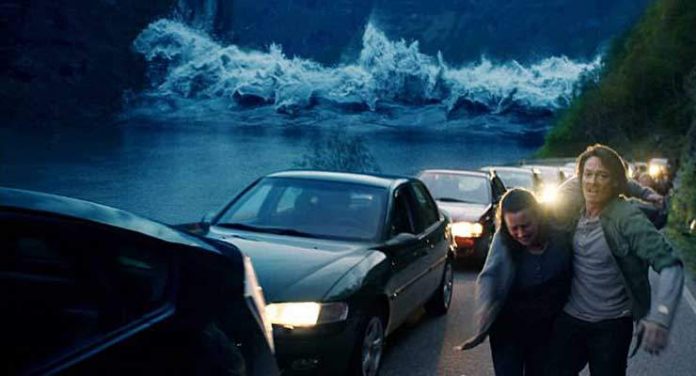 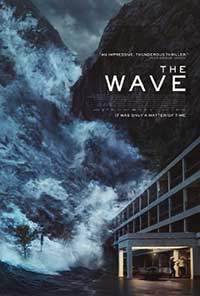 The small village of Geiranger lies at the base of a fjord. A fjord is defined as: a long, narrow arm of the sea bordered by steep cliffs: usually formed by glacial erosion. Kristian Eikjord (Kristoffer Joner) is a geologist who upon closer scrutiny of the mountains and area that surround Geiranger believes that there will be a tsunami in the very near future. History has repeated itself several times with various rock slides that have generated tsunamis in the area before. They have also

killed and wiped out villages in the area of the fjord, so the one is inevitable – the time must come to prepare for chaos.

As is typical of a disaster movie – no one seems to believe Kristian – not his wife or children let alone his colleagues at work. Not only do they not believe him they also don’t want to believe his scary calculations of only having 10-minutes to escape the town if a tsunami should hit the town. That’s it – 10-minutes is all the time that’s left should a tsunami hit Geiranger.

Having watched the trailer by accident I was on board as soon as I saw the some of the scenes involving the Norwegian settings along with the actual tsunami. Let’s not kid ourselves – there is a tsunami in the film – we just have to brave through the chaos and see if our protagonists will make it out alive.

The Wave should be very familiar territory in terms of storyline. It IS a typical disaster film where the very likable smarty pants geologist, doctor, etc., knows his stuff, makes a prediction and is quickly vilified by everyone around him. All Kristian can do is warn folks, family, and make contingencies against the impending doom.

Once the wave hits it becomes a tale of survival and recovery. Sure, we’ve seen this sort of film before, it doesn’t

seek to reinvent anything, but it is refreshing to see a film like this not take place in the USA. Maybe the Norwegian setting and stellar special effects gave the film an overall pass. I thought the film was exciting and entertaining. Yeah, it has a cliché plotline but things get blown up real good, so it gets a pass. The Wave is in Norwegian, with English subtitles and is available via several VOD, and streaming platforms and is currently in limited release theatrically here in the states.

The Wave (TheaterByte Movie Review)
4 / 5 TheaterByte Rating
{{ reviewsOverall }} / 5 Users (0 votes)
Magnolia PicturesStudios & Distributors
R (for some language and disaster images)Rating Certificate
NorwayCountry
Norwegian (English subtitles)Language
105 Mins.Run Time
2.40:1Aspect Ratio
Roar UthaugDirector
John Kåre Raake, Harald Rosenløw-EegWriter
4 March 2016 (Limited)Release Date
The Film
Summary
The Wave is a nifty little-big film about a killer tsunami that rips through the Norwegian coastline. It's not a life-changing film but it is an entertaining and refreshing take on the typical "disaster" films we have been accustomed too. The Wave is recommended.
What people say... Login to rate
Order by: