The latest feature-length entry in the One Piece anime franchise is One Piece Film: Gold, a gold-plated adventure that finds the Straw Hat crew sailing into a floating gambling paradise that it part Las Vegas, part Monte Carlo and part Cloud City where they are greeted with showers of gold dust falling like some ticker-tape and a concert. Welcomed into the dazzling gambling haven by the seductive Baccarat and ushered toward every game where their luck seems endless. Luffy can’t lose, none of the Straw Hats seem to be able to lose, which only emboldens them to gamble more and more, bringing them to a crucial moment when Baccarat, powered by the Devil Fruit, wipes out Luffy’s luck and causes him to lose everything to the city’s leader, Tesoro.

The Straw Hats don’t take this lightly once they realize they have been duped, and they try to attack Tesoro, but he encases Roronoa Zoro in gold and reveals he has the ability to manipulate gold, which they have all been sprinkled with upon arrival at the golden city. Now Roronoa Zoro’s life hangs in the balance unless the Straw Hats can repay their debt to Tesoro by the deadline of 12:00 and the Straw Hats must find a way to defeat him and his bad-luck dealing minion Baccarat without their knowledge before the time is up. 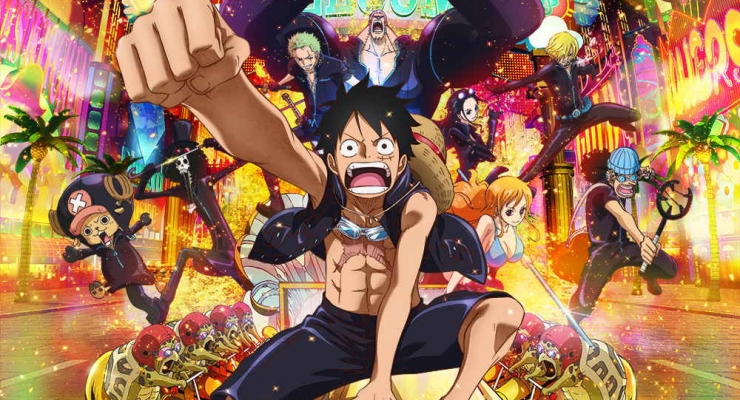 One Piece Film: Gold is one of the more enjoyable feature-lengths in the One Piece cannon as it removes the crew from their ship for the entirety of the film and it places them in dazzling surroundings. I mean, c’mon, who doesn’t like rooms filled with gold? The action is up to the usual standards of the One Piece, but also there is a true sense of suspense over the fates of characters we know and love, even if, ultimately, we know everyone will be okay, an excellent job is done building the suspense for this one.

And Roronoa Zoro is one of the better villains to come along in One Piece. Hid combination of gaudy avariciousness, Hugh Heffner-esque garb, and out of control ego make for one villain you love to hate. Normally, I watch One Piece in Japanese, but I screened this in English and Christopher R. Sabat did a pretty good job hamming up Zoro, which in this instance worked with the character’s overall image.

One Piece fans should find One Piece Film: Gold to be one nonstop fun ride from start to finish.