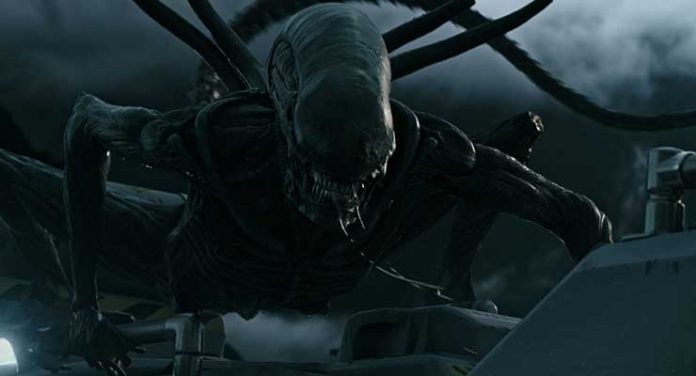 Nearly 40 years ago, I watched Ridley Scott’s trailblazing film, Alien, and was literally blown away by H.R. Giger’s surrealistic sets and its terrific titular creature.  Alien also delivered a riveting, suspense-laden horror story.  The last two sequels in this series directed by David Fincher and Jean-Pierre Jeunet respectively  have been disappointing as special effects seemed to have supplanted story-lines. Scott has now resumed the director’s chair for Alien: Covenant. Those expecting another sequel in the Alien film franchise will quickly realize with the brief reappearance of  the late tech-billionaire Peter Weyland (Guy Pearse) and his “son” the android David (Michael Fassbender) that this is the legitimate successor to Scott’s 2012 sci-fi thriller, Prometheus.

Ten years have passed since the failure of the Prometheus mission. The Covenant is a huge space transport vessel en route to Origae-6 a distant planet and future home to the 2000 colonists and 1000 embryos cryogenically stored on board. The android Walter (Michael Fassbender again) is overseeing the flight while the crew waits in suspended animation until their destination is approached. When the Covenant is damaged in a neutrino storm, Walter rouses the crew members but during the reanimation process, Captain Branson (James Franco) is incinerated. First mate Christopher Oram (Billy Crudup) takes over and after a human radio transmission is received from a much closer planet, he changes course  for it over the vehement objections of terraforming expert Daniels “Dany” Branson (Katherine Waterston), the captain’s widow. Oram and several crew members take the Covenant’s lander to the earthlike terrain, apparently devoid of lifeforms, where they find the source of the signal in the wreck of the spaceship that David and archaeologist Elizabeth Shaw had used as an escape vehicle in Prometheus. 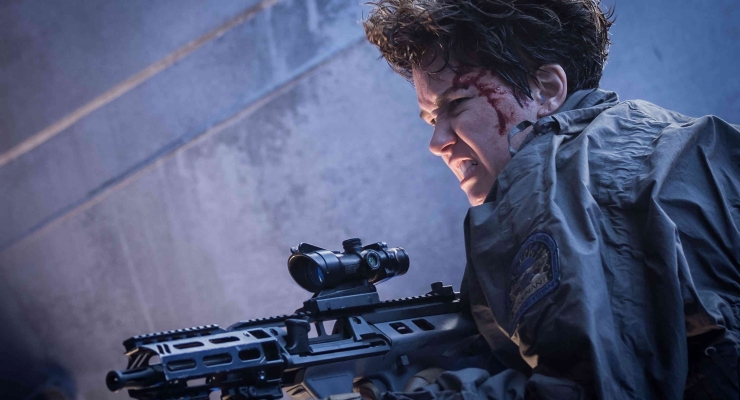 Oram’s mission fares poorly for two crewmembers, Ledward (Benjamin Rigby) and Hallett (Nathaniel Dean), who get infected with spores and, soon, small aliens explode out of their bodies. Later, two more team members, Karine Oram (Carmen Ejogo), Chris’s wife and Maggie Faris (Amy Seimetz), pilot Tennessee’s (Danny McBride) wife, die in the lander explosion. The remaining members of Oram’s exploration team are suddenly greeted by a hooded unshorn David whom the long-deceased Shaw had rebuilt. The android takes the men to a dark city littered with the bodies of “Engineers” (the creators of humanity?) who died from an airborne plague that he had rained down upon them. The enterprising David has successfully synthesized “xenomorphs” that resemble the original alien life forms, perhaps intended to replace the human beings that he truly abhors. As Tennessee races to rescue the few survivors from the mother of all xenomorphs,  the groundwork for yet another sequel is being laid.

If Prometheus left some viewers scratching their heads, Alien: Covenant leaves much less to the imagination as  director Scott returns to the reliable plot device of aliens versus humans. Danny McBride, departing from his usual light-hearted roles, becomes a heroic pilot and Katherine Waterston’s fearless Dany proves a worthy successor to Sigourney Weaver’s Ripley. The real tour de force is Michael Fassbender’s portrayal of dual personalities: the manipulative, heartless David and the accommodating devoted Walter. Cinematographer Dariusz Wolski also collaborated with Scott on Prometheus and evokes a credibly strange new world from some impressive location shots in New Zealand and Australia while the Dolby Atmos soundtrack provides a full frontal (and overhead) assault on the ears. There are some plot detours (like the extended pedantic scene between the two androids) that make Alien: Covenant  seem somewhat longer than its two-hour run time and, like Prometheus, this film occasionally bemuses its audience. Perhaps, every now and then, director Scott should refrain from posing complex existential questions and just focus on good old-fashioned storytelling. However, I doubt that any of these quibbles will stop the Alien film fans from flocking to Alien: Covenant for its highly thrilling panoply of blood and gore, and death and destruction that Scott and company manage to successfully dish up every single time.