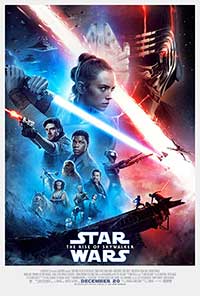 Star Wars: The Rise of Skywalker is the third installment in the third Star Wars trilogy that opened four years ago with Star Wars: The Force Awakens. Two years later Star Wars: The Last Jedi loaded the deck with star power, bringing back Mark Hamill as Luke Skywalker to help young Rey (Daisy Ridley) acquire the “Force.” As the curtain fell, the Resistance had narrowly escaped the evil First Order, setting the stage for this final episode.

The late Emperor Palpatine (Ian McDermid) still very much alive but in poor health has recruited Kylo Ren (Driver), son of Han Solo (Ford) and Princess Leia Organa (Fisher), to the First Order. Palpatine orders Kylo to kill the rising Jedi warrior Rey (Ridley) who joins forces with Poe (Isaac), Finn (Boyega), and Chewbacca (Joonas Suolamo) to find and eliminate the Emperor. To accomplish this, they must acquire a rare Sith wayfarer with its distant location inscribed on a dagger that only C-3PO (Anthony Daniels) can translate. Ironically, this is the same weapon that killed Rey’s parents after they hid a young girl from Palpatine who turns out to be (gulp!) her grandfather.

The inevitable conflict looms ahead between General Pryde’s (Richard E. Grant) massive First Order forces and the Resistance’s motley fleet of old spaceships. Rey’s lightsaber that she received from Luke Skywalker (Hamill) gets a workout in her duel with a  Kylo conflicted by his late father’s memory that encourages him to reassume his identity as Ben Solo and leave the dark side. As Poe, Finn, Chewy and Lando Calrissian (Williams) arrive at the First Order’s space station, the fate of the galaxy will be decided in the ultimate battle royale. 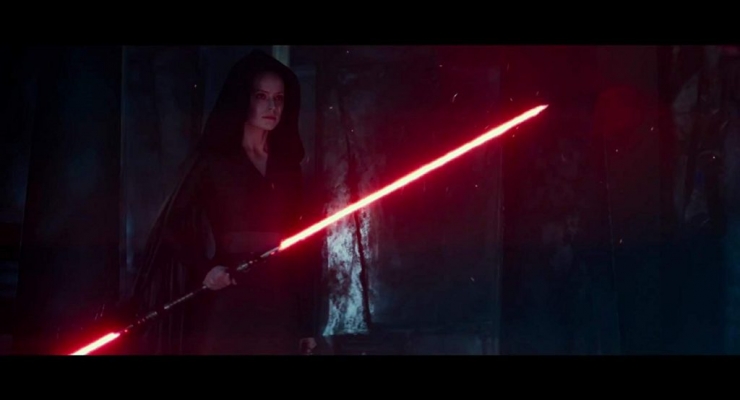 The Rise of Skywalker concludes, at least for now, the Star Wars saga. J. J. Abrams and Chris Terrio have contributed a script that breaks no new ground dramatically but gives the SW fanbase exactly what they want—nearly nonstop action coupled with enough lighthearted moments to offset some of the film’s rather grim moments. A well-knit ensemble delivers its wide range of roles most effectively or put otherwise, the good guys are really good and the bad guys really bad. Daisy Ridley appears to be the object of affection of both John Boyega and Oscar Isaac but beyond a group hug, this particular storyline is one of the film’s weak links as is the ambiguous love-hate relationship between Ridley and Driver. On the plus side, there is a nearly seamless integration of the late Carrie Fisher’s brief scenes from extra The Force Awakens footage into the current mix and the very welcome return of perpetually suave 82-year-old Billy Dee Williams after a 36-year absence from the Star Wars saga.

We expect Star Wars films to be visually stunning and The Rise of Skywalker definitely fills that bill.  With a 4K digital intermediate blessed with a Dolby Vision HDR format, colors and details simply pop out of the screen.  The CGI effects, particularly the recreation of all those exotic creatures that frequently populate the scene, are masterful.  Theater audiences will frequently duck for cover thanks to the Dolby Atmos soundtrack that brings them into the heart of the action.

I have been a Star Wars fan since Star Wars: Episode IV—A New Hope first screened more than four decades ago.  Was the two-year wait for this final installment of the final trilogy worth it? Yes and no. While it does not attain the heights of that very first Star Wars episode, it is still highly entertaining. I would recommend that viewers park their critical faculties at the door, sit back for a couple of hours and enjoy it.