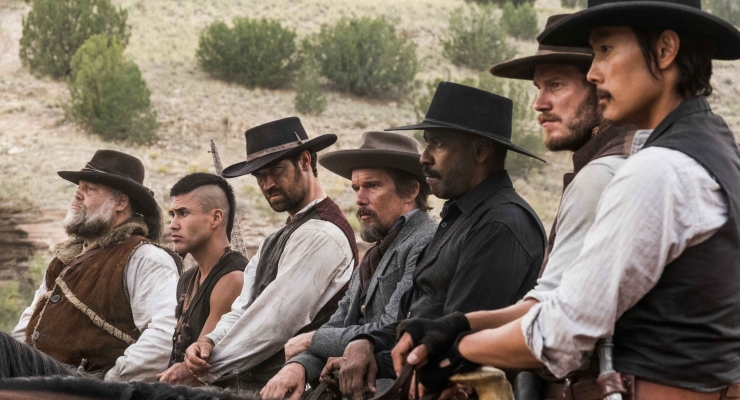 The seven men ride into town and begin military-style training of its citizens to get them combat-ready for Bogue’s forces, while Chisholm recruits miners to swell their ranks. After wiping out the “deputies” that Bogue had stationed in Rose Creek, Chisholm lets one Bogue employee, Gavin David (Ritchie Montgomery), escape to call out his boss and deliver a message that the bounty hunter hopes will help Bogue recall a past event that involved the two men.

As in the two previous “Seven” films, the climax is the big battle, this time between the huge Bogue army and the villagers, aided by the “magnificent seven.” One over-the-top scene follows another as death and destruction reign supreme leading up to a final reckoning that will surprise no one.

With a storyline that, in its broad strokes, resembles the earlier film, this version of the “seven legend” delivers an oppressive level of carnage and graphic violence. The script dredges up cliché after cliché from the standard Western lexicon (Emma: “I seek righteousness but I’ll take revenge,” Chisholm: “You tell your boss if he wants his town, come see me,” or Bogue with a line cribbed from the original film: “If God did not want them sheared, he wouldn’t have made them sheep.”) Putting such issues aside,  veteran director Fuqua delivers a prime example of his current body of work: gobs of action and an unswerving point of view. Mauro Fiore (Tears of the Sun) is the film’s unsung hero with camera work that produced a shot-in-35mm Panavision source and, mastered in 2K,  draws us, like it or not, into the often disturbing images on the screen. With a lineup that poses no serious threat to the 1960 hero-laden cast featuring Yul Brynner, Steve McQueen, James Coburn, Charles Bronson, Eli Wallach, and Robert Vaughn, this newest Magnificent Seven installment also lacks the dramatic balance of the earlier film which had more lighthearted moments, a more probing confrontation between the bandit leader and his Mag 7 counterpart, and a charming little romantic side story. Recommended mainly for cineastes who favor gratuitous violence and boom-laden sound tracks over character development and dialogue.