The Amazing Spider-Man 2‘s lukewarm reception prompted the Columbia Pictures-Marvel Studio team to deliver a better reboot for this popular franchise. The result is Spider-Man: Homecoming directed by Jon Watts with a script by Jonathan Goldstein and John Francis Daley that returns “home” to the basic elements that made this series originally so successful.

Although there is no spider-bite scene to set the stage, it is obvious that Peter Parker/Spider-Man (Tom Holland) is early in his superhero career and managing his new powers. An unexpected father figure, Iron Man/Tony Stark (Robert Downey, Jr.), sees the raw potential in this 15 year-old star student at New York’s prestigious Midtown School of Science and Technology and, taking Peter “under his wing,” assigns assistant Happy Hogan (Jon Favreau)  to supervise his  “internship” for the superhero club.

Peter continues  his after-hours vigilante missions and, after returning from the latest one, accidentally exposes his Spider-Man identity to nerdy best buddy Ned (Jacob Batalon) who promises to keep it secret. Peter’s Aunt May (Marisa Tomei), a pretty hot 40-something widow, worries about her nephew’s late night disappearances and failures to respond to her phone calls. Peter has a serious crush on older student Liz (Laura Harrier). Other members of their techy inner circle, Michelle “MJ” Jones (Zendaya), and Eugene “Flash” Thompson (Tony Revolori) doubt his ability to captain their Academic Decathlon team bound for Washington D.C. 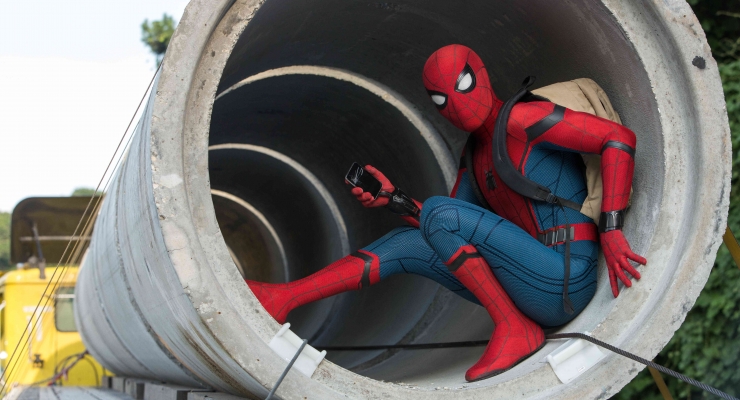 Spider-Man films always have great villains but Adrian Toomes/Vulture (Michael Keaton) is clearly cut from different cloth. Toomes is the hard-working boss of a salvage company clearing out debris from central New York City left after a massive attack by the alien Chitauri. When Stark’s “Department of Damage Control” assumes the salvage project, Toomes’s company tanks. His foreman, Phineas Mason (Michael Chernus), “borrows” technology from recovered Chitauri weapons to create fashion Toomes’s Vulture suit and advanced armaments that they sell to NYC baddies. In his conventional domestic life, Toomes is married to Doris (Garcell Beauvais), and his lovely daughter just happens to be Liz, complicating her relationship with Peter after each man figures out who the other one really is. Following an earlier “fly-in” encounter with the Toomes weapons team and, against Stark’s wishes, Peter starts a one-man campaign against the bad guys that nearly does him in.

Spider-Man films have their usual white-knuckle moments and Homecoming is no exception: a spectacular rescue of the championship Decathlon team (of course minus Peter) from a seriously damaged Washington Monument, a near-miss sinking of a crowded Staten Island ferryboat, and an inevitable mano-a-mano showdown between Spidey and Vulture.

Numerous violent action scenes are counterbalanced by laugh-out-loud moments like Ned’s endless bailing out of Parker the student, Flash’s irreverent rivalry for best in class, MJ’s snarky “breakfast club” put-downs, and Peter’s early misadventures with his new Spider-Man suit that sports “Siri” voice commands (Jennifer Connelly). While blessed with a very strong cast, this is really Tom Holland’s film from beginning to end. Holland spent a few days preparing for his role at the Bronx High School of Science and delivers a very credible character burdened with teenage angst and social awkwardness; after all, it is hard to be a superhero one minute and a gee-whiz high-schooler the next.

Cinematographer Salvatore Totino, known for his great work in the Da Vinci Code trilogy, provides terrific location shots. The teams of set artists and digital wizards create perfectly integrated CGI effects, convincing viewers that Spidey can really fly and spin powerful webs on anything. Director Watts may be new to blockbuster films but his cameras give us a brilliant two-hour thrill ride. In many ways, I think that this is the most successful film of the franchise so far and one that shows audiences how much special effects have advanced over the past fifteen years. The many fans of superhero films will come away from Spider-Man: Homecoming like I did exhausted, but exhilarated. Highly recommended.