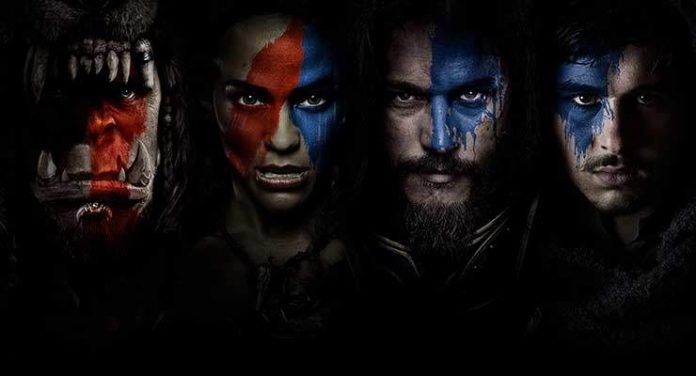 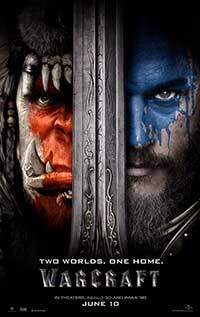 I will preface this review of Warcraft by saying that I have never played the online game and that World of Warcraft has indeed been a staple of gaming since 1994. The game is considered a MMORPG, which means massively multiplayer online role-playing game. Say that three times fast! Having not been familiar with the game or lore itself – it was quite surprising that budding wunderkind Duncan Jones (Moon, Source Code) was set to co-write and direct an adaptation of the film, because one would assume that he would move on to more grounded and personal films as opposed to something accessible.

Warcraft features the standard set-up of humans vs. Orcs. Orcs are giant green

troll-looking humanoids that stand about 10 feet tall and live by warrior codes like war and conquering. The human characters live as human do in a typical sword and sorcery movie do. They have armies, kings, and a few warriors of their own. I won’t bother going into any pressing details about the film, because there’s really nothing that pressing about it.

The planet of the orcs is no long habitable and their leader-mage has set forth an alternative to escape and conquer a new world so as they can continue to live and prosper. Azeroth is this new world but it is not a lone world – humans live there and govern it quite well, with help from their own Mages. The kingdom that lies at the base of the orcs’ steps is Stormwind and it is ruled by King Llane Wrynn (Dominic Cooper). His first guard is Anduin Lothar (Travis Fimmel). Together they must sort things out with the new visitors, because from the looks of things the orc horde doesn’t ask for permission when conquering. 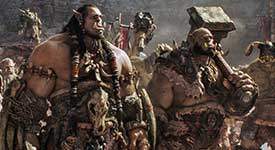 I knew going into Warcraft that it would be a dense undertaking and it was. One is thrown into this vast landscape of man, creature, worlds, sorcery, etc., without a life vest, if you will. I’m all for it but the least that can be done is to make the final product a bit coherent. I spent the majority of the film wondering what was going on, and I’m a pretty savvy filmgoer, but since the lore is new to me it all felt rushed. The awkward editing didn’t help and I wonder if we’ll get a director’s or extended cut on Blu-ray at some point, because there are more than several points throughout the film that need fleshing out.

As far as the special effects go…Paula Patton as Garona, the human/orc hybrid is a goddess unto herself. No amount of green paint, dirt, or tusks could ever make her not look hot. She is a sight to behold. As far as the

regular visual effects go those are hit and miss. Certain shots of landscapes and orc textures look great but then certain shots of them in motion or still shots look weird and slightly amateurish. The film also features mages casting spells and what not and those scenes translate well in terms of action/visual panache. I think the magic portions of the film were done well.

Underneath it all, Warcraft the feature film fits into a sort of middle ground. Only hardcore fans of the franchise will gravitate towards it, but the casual viewer will not. It reminds me of why Avatar was such a behemoth success. The story is simple and easily accessible to even the most casual observer while presenting some fantastic visuals. Warcraft is quite the opposite. It has some striking visuals but the story is an incoherent mess that will alienate the general movie-going audience. Well, here’s hoping Duncan Jones goes back to his roots and starts on that sequel to Moon he’s been talking about. If you absolutely must see Warcraft then I suggest a rental when it hits home video.