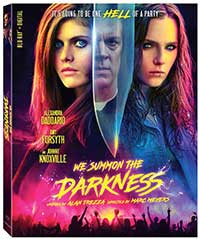 The dark comedy/horror film We Summon the Darkness is set in the 1980s and plays with many of the tropes from the era and of the horror genre. Amidst the backdrop of a number of satanic ritual killings throughout the heartland that a popular televangelist John Henry Butler (Johnny Knoxville) has been using to his advantage to rail against and help to grow his ministry, three best friends Alexis (Alexandra Daddario), Bev (Amy Forsyth), and Val (Maddie Hasson) go on a road trip to see their favorite heavy metal band, Soldiers of Satan in concert. When a van full of three douchey metalhead dudes throws a milkshake at their car on the way, it leads them to crossing paths and eventually hooking up the three apologetic metalheads at the show. Mark (Keean Johnson), Kovacs (Logan Miller), and Ivan (Austin Swift) are eventually invited back to Alexis’ family home out in the country for an after-party and that’s when the real violence begins to ensue.

To say more about the plot at this point would be giving away the major plot twist in We Summon the Darkness. But after the opening act, the film does kick into high gear slasher material, just not following along the path one would normally expect. Gender roles are reversed, final girl status seems obvious but not for reasons one might be thinking.

Alexandra Daddario is superb as a prototypical horror babe, as are her co-stars Amy Forsyth and Maddie Hasson, who become even stronger when the film’s twist is revealed.

This review is based on the digital version of the film from iTunes, which comes with iTunes digital extras: 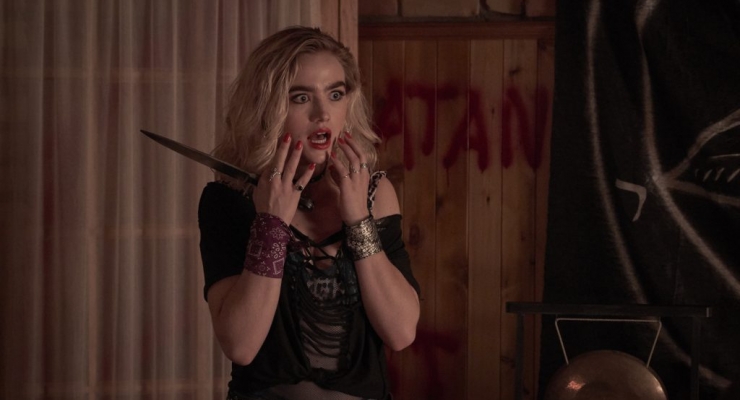 Maddie Hasson in We Summon the Darkness (2019)
5 Photos

We Summon the Darkness is available now on VOD and out on Blu-ray and DVD May 9, 2020 from Lionsgate