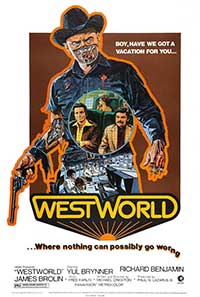 Westworld revolves around an amusement park named Delos that provides its guests with the ability to live in another era. There are three departments: Medieval World, Roman World, and Westworld, where people have the chance to live in the Wild West and dress like cowboys. There are androids who are used as a substitute for people, designed to serve the guests’ demands in this alternate reality.

Two friends, John Blane and Peter Martin, decide to spend some days in the Delos resort and especially in Westworld. Peter seems to have some difficulties adjusting to the new environment, but John helps him by encouraging him to engage in the many activities provided. Things get worse when an “infectious disease” spreads among the androids making them aggressive, which could threaten the lives of the visitors.

Concerning the script, I wanted to mention that the concept is mindblowing because the manipulation of robots for the sake of human entertainment is disguised as a vacation in a theme park. Although the idea of experiencing another era is alluring, the existence of prostitute robots and generally androids who are designed to be killed proves it is not as innocent as it appears. I think one of the most memorable scenes is watching all these injured robots placed in an operation room and all these doctors fixing them mechanically, like an incident that could happen in a real-life hospital, which I found shocking. Generally, I found the plot very interesting, as this dystopian concept remains appealing until the very end.

John Blane, who has visited the park before, takes his friend Peter Martin for the first time there. Peter appears skeptical about this new reality, wondering whether it was worth it to spend their money on this adventure. At the same time, he finds the alternate reality with androids getting killed and serving the sexual pleasures of the guests problematic. On the other hand, John is fine with the whole concept and seems to enjoy it, as if he is actually living in the American Old West. There is an android called Gunslinger, which instigates fights between the guests and the androids and gets obsessed with Peter. 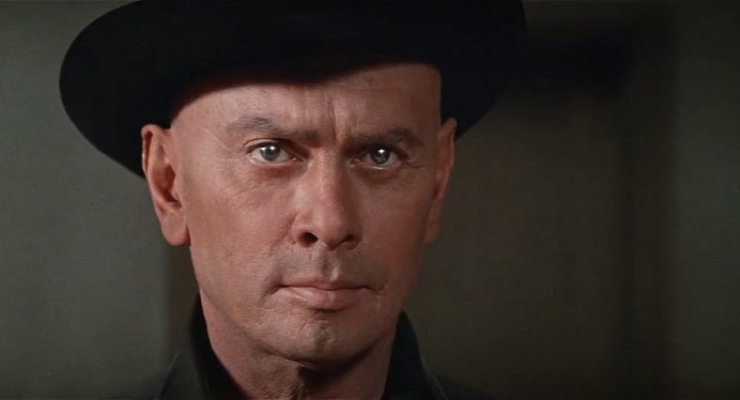 James Brolin and Richard Benjamin were very good in their roles as John and Peter respectively. Yul Brynner was convincing and haunting, as the ominous Gunslinger. The rest of the crew delivered worthy performances as well.

In terms of direction, Michael Crichton did an excellent job directing the film. My favorite scene is during the chase between the Gunslinger and another character in a corridor, towards the end of the film when we listen to the sound of their steps, which makes it full of suspense. I would also like to praise the early use of CGI technology, as it places the viewer in the android’s shoes and gives a sense of illusion.

As far as cinematography is concerned, it is stunning with all these different settings, like a palace, an operation room, the call center for technical parts, and generally the whole setting of the American West, with the aesthetic and the dress code of the era. An amazing job was done in the sense that, not only do the guests but also the viewers become a part of this fictional world, to an extent that they and we can almost forget reality.

The ending was a bit abrupt in my opinion, and I found it vague as well. I expected to see something more specific about what happened with the fate of one of the protagonists and I believe the inclusion of one extra scene was essential, so as to feel that I was satisfied.