Win a Copy of Saving General Yang on Blu-ray Disc

We are offering three of our readers the opportunity to win one (1) of three (3) copies  on Blu-ray Disc of the historical war epic Saving General Yang from director Ronny Yu, courtesy of Well Go USA Entertainment. The film was recently reviewed by our very own Brandon DuHamel who said the film was “a historical epic with stunning battle sequences”. See below for further details and for information on how to enter.

“…a hip spin to an old-fashioned tale of chivalry.” – Maggie Lee, VARIETY

“…a swift hit of adrenaline and a treat for the eyeballs ….”
– Cameron Williams, THEPOPCORNJUNKIE.com

“… does the legend proud, even for those who have never heard it before.”
– Jay Seaver, EFILMCRITIC.com 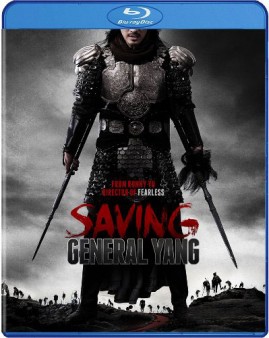 PLANO, TEXAS.  (October 7, 2013) – Based on the ancient Chinese folklore of the seven brothers who fought against all odds to rescue their legendary warrior father, the acclaimed action drama SAVING GENERAL YANG debuts on Blu-ray™, DVD and Digital December 10th from Well Go USA Entertainment. The international box office hit is an epic tale about the renowned Song Dynasty’s military defense headed by the clan of Yang against a nomadic Northern nation. Head of the Yang clan is the charismatic old general, Yang Ye, who is also the father of seven sons. The seven young men possess differing temperaments, characters and are each a master of their own kung fu discipline, but they have to join forces and wits to save their father from enemy forces. Directed by Ronny Yu (The Bride With White Hair, Fearless, Bride of Chucky), SAVING GENERAL YANG stars Adam Cheng (Drunken Master Killer, The Legend), Ekin Cheng (Storm Warriors, Treasure Hunt), newcomer Yu Bo, Vic Chau (New Perfect Two), Li Chen (Aftershock), Raymond Lam (The Emperor and the White Snake, The Jade and the Pearl), Wu Chun (14 Blades), newcomer Fu Xin Bo, Xu Fan (Back to 1942, Aftershock), and newcomer Ady An. The film had its world premiere at the 2013 Hong Kong International Film Festival.  Bonus materials include a behind-the-scenes featurette “The Making of Ip Man: The Final Fight,” plus interviews with the cast and crew.

Synopsis:
Northeast China, early Northern Song dynasty, AD 986. The Khitan army takes its revenge for a past massacre, abducting General Yang Ye (Adam Cheng) and leaving his wife and seven sons to rescue him – and fall into their deadly trap. Led by the first son (Ekin Cheng), the seven – two of whom have never seen combat – set out with a small band of fighters to face an army of thousands, brave the treacherous Wolf Mountain, face the nemesis of their shared history, and find the way back alive – all to bring their father home.