Win a Copy of Firestorm on Blu-ray Disc

We are giving  three readers of TheaterByte a chance to win one (1) of three (3) copies of the thrilling Hong Kong action film Firestorm on Blu-ray Disc. In his review of the Blu-ray, our very own Brandon DuHamel said “Andy Lau and Gordon Lam put on riveting performances in this non-stop shoot ‘em up film, acting as the glue that holds the thinly woven plot together.” See below for further details o the Blu-ray Disc and on how to enter for a chance to win Firestorm  on Blu-ray Disc from Well Go USA Entertainment.

“… a relentlessly fiery pyrotechnical spectacle, climaxing with a protracted heavy-artillery shootout that has Hong Kong’s central business district literally caving in on itself.”
~ Clarence Tsui, THE HOLLYWOOD REPORTER

“…the Hong Kong equivalent of a Hollywood action blockbuster.” ~ LOVEHKFILM.COM 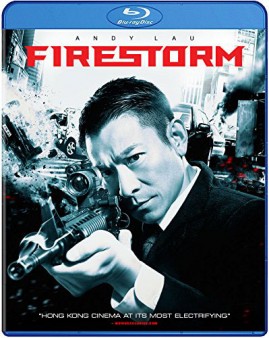 Synopsis:
A storm is heading toward the city of Hong Kong, threatening the lives of everyone in its path. As citizens scramble for cover, a crew of seasoned criminals stage a series of armored car heists in broad daylight, showing no mercy to anyone who gets in their way.  Hardboiled police inspector Cao Nam (Andy Lau) has had enough.  He vows to take back his city, but quickly learns that regular police tactics are no match for the thieves’ unmerciful brutality. The more Nam pursues them, the more unhinged he becomes – and the savage confrontation brewing in the streets may leave an aftermath even more horrifying than the devastating effects of nature itself.

FIRESTORM has a runtime of approximately 110 minutes and is not rated.