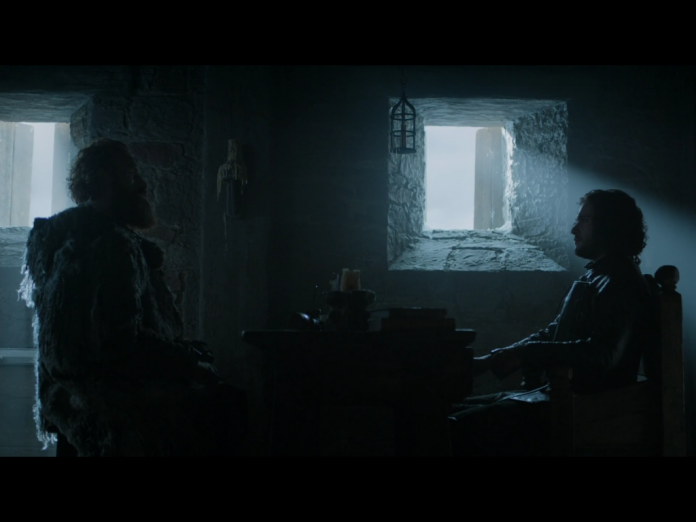 Hard to believe we’re already half through the fifth season of Game of Thrones. As someone who has read the series, what I’ll admit to enjoying the most about this season are the departures from the source material. In fact, it’s these deviations that are making the series stronger than the original material. It gives me hope. George R.R. Martin may never get around to writing “the end”, but luckily for us HBO will. Even though this mid-series episode left several storylines in the air, we can rest assured that they will eventually be answered.

“Kill the boy Jon Snow. Kill the boy and let the man be born.” Wise words from an old crow to the new Lord Commander. Along with the episode’s namesake, it’s also reflective of the types of choices the leaders in this episode must make. Being in charge means making the kinds of sacrifices his followers won’t understand, like inviting the Wildlings to join them. In the end, they all want the same — to survive the winter. Whatever the cost, Jon must prepare himself and his people for the inevitable tide of White Walkers.

Meanwhile Daenerys makes some tough decisions of her own. Her choices now are setting new terms for the people of Meereen. She’s rounded up the leaders of all the wealthy families and one by one she’s going to feed them to her dragons. Or at least she’s implied as much with her first charbroiled offering. Again, I get why she feels the need to prove herself, however her Westeros trip is long overdue! I don’t want to see Daenerys get lost in Meereen. It’s such a waste of a good character.

Tyrion and Jorah Mormont seem to be bonding as they continue their journey to Meereen. Though after their incident with the stone monsters I’m not sure Mormont will make it. The greyscale that nearly stole Stannis Baratheon’s daughter may soon kill Jorah. Will he make it to his queen in time to ask her forgiveness? Or will only Tyrion be left to tell his sad story? Speaking of Tyrion, he has to be the luckiest character alive. Or the smartest, as he once again narrowly escapes a great catastrophe. 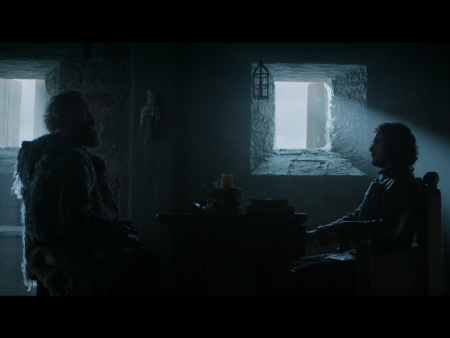 No mention of Kings Landing or Dorne. Tyrion was the only Lannister to grace us with his presence. While I rarely miss Jaime, I missed seeing Cersei. The battle between her and Margaery is heating up and thanks to current departures I can no longer guess where it’s headed based on my previous reading. Which leaves me with a mixed sense of anxiety and anticipation. Which is also how I’m beginning to feel about Sansa Stark, a character I once cared little for.

Sansa is now in a precarious and perhaps even deadly situation. There’s no telling what new evils Ramsay Bolton is thinking up! And with a pregnant stepmother he may no longer be the Bolton heir. If she has a son, Ramsay will revert back to his bastard status. At which point he’ll surely be looking for someone to bear the brunt of his aggression.

With Stannis marching north to reclaim his birthright, Jon off to fetch the remaining Wildlings, these strike me as the only two men in the entire series that have their priorities straight. Both are equally concerned with protecting the Seven Realms, understanding all too well the threat of the White Walkers. The zombies don’t care whose sitting on what throne.

Overall this was a slower paced episode, perhaps suffering from a mid-season slump? Or maybe there was some necessary material to cover, a few points that had to be made so that next week can be the kind of explosive, nail biting show that we’ve come to expect from Game of Thrones. I can only hope that is the case.