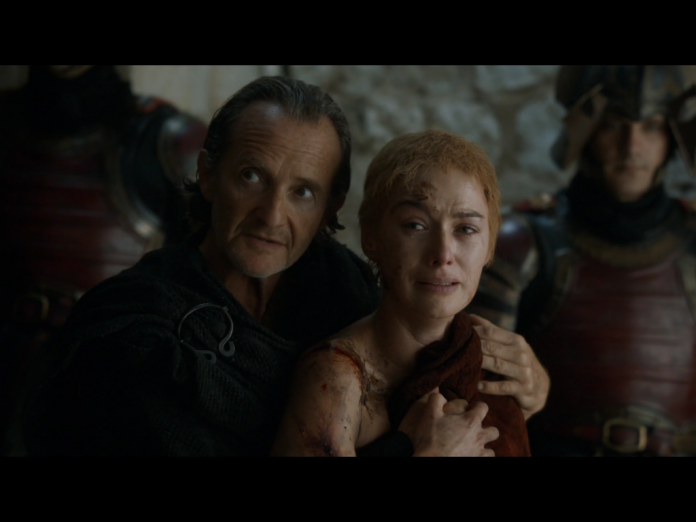 Game of Thrones is a show known for killing its beloved characters when you least expect it and this season finale was no different. When it ended I was in shock, asking myself a question I’ve asked countless times throughout the series, “how could they do that?!”

Season five ends with Jon Snow in a pool of his own blood, lured to death by his own apprentice Olly. Traitor. That’s what the men of the Nights Watch labeled him. Each man beginning with Ser Alliser Thorne and ending with little Olly, stabbed their Lord Commander “for the Nights Watch.” What traitors! There was a lesson here Jon Snow, no good deed goes unpunished – he should’ve killed Alliser Thorne when he had the chance. I’m willing to bet he was behind this coup.

Jon Snow’s eyes fixate on something in the distance, death, winter, or all that is lost – who knows really. Maybe his last thoughts were of Sam, his only friend, and how he’d saved him by sending him away to Maester training. The Night’s Watch has no honor, a point the show has hammered home on numerous occasions. Jon Snow thought he could change the ruffians he commanded if he treated them as a civilized people. That’s where he failed. I understand why Jon Snow needed to be eliminated, from a writers perspective his death gives the White Walkers a better chance at busting through the wall. Without him they’ll all be lost.

It’s hard to accept that this is the end. Maybe it isn’t?

Melisandre booked it back to Castle Black when she realized the error of her ways. Her God either mislead her or she failed to interpret his meaning. Either way, she has the power to bring the dead back and she’s conveniently located within Castle Black. So maybe this isn’t the end of Jon Snow. Maybe.

Burning the little princess at the stake cost Stannis the war he was waging. Soldiers deserted him, stealing horses and food while those that remained had little faith in their would-be king. Men can’t fight well for a cause they no longer believe in. Who wants to follow a king who pretends to be just and then burns his innocent little girl because some religious zealot convinced him to?

Stannis deserved to die the moment he murdered his daughter. He knew as much and hardly put up a fight when Brienne of Tarth found him. “Go on do your duty,” he said to her, with defeat came certain death if not at the hand of Brienne then surely someone else. Now that Brienne has avenged Renly, her only mission is to protect Sansa. I hope she finds Sansa before Ramsay does.

Surely, Sansa and Reek did not jump to their death though that would be better than facing Ramsay. Both of them grew up at Winterfell, perhaps they have some childhood experience jumping safely from the castle walls. I hope. Sansa has become a craftier woman though she’s still a far cry from her sister Arya. If only one Stark member is to survive, it has to be Arya!

Arya has the most interesting life and is well on her way to being one of the show’s best assassins. In a ghoulish scene, she takes a fierce beating just like a professional submissive, holding each painful hit in, using it to fuel her fire before turning the tables and unleashing a fury greater than anyone expected. First she stabs out his eyes, then she gags him, Arya wants his full attention when she tells him who she is. She’s fantasized about killing Meryn Trant for so long she savors every bloody second.

When Arya returns to House of Black and White she’s in for a surprise. As Jaqen H’ghar said to her, “that man’s life wasn’t yours to take.” She stole it from the Many Faced God and now owes him a debt. Oops. In a noble gesture, Jaqen drinks a poison implying that he’s using his life to pay for Arya’s debt. As Arya sobs over the death of her only friend, he reappears behind her. Confused Arya tears numerous faces off the body before her until finally stopping on her own. It’s the last thing she sees before her eyesight fades. I’m not sure the punishment fits the crime, but they so rarely do in Game of Thrones. 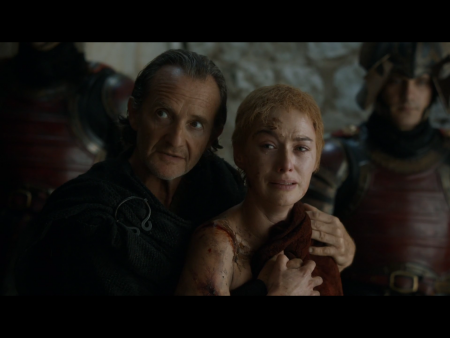 As wretched as Cersei’s walk of atonement was, I couldn’t begin to calculate her sins to determine whether or not she deserved it. She’s a wicked woman who used a religious cult to push her own petty agenda, something she no doubt regrets but that was only her most recent crime. Still, living in that putrid cell should have been punishment enough. Her naked walk of shame wasn’t nearly as satisfying as I’d hoped. I just felt sorry for her. She was a broken desperate woman willing to endure anything to go home. How can that make anyone happy?

As Jaime and his entourage sail away from Dorne, he trips over himself trying to explain who he is to his daughter. Myrcella says she always knew, offering him the acceptance he so craved only moments before dying in his arms. It was a bittersweet moment. While the women known as the Sand Snakes stand around applauding themselves for poisoning an innocent little girl, they fail to see the bigger picture. They haven’t yet envisioned the consequences of their actions. A problem Doran Martell warned them of.

Over in Meereen, Daenerys has flown off with her injured dragon Drogon. He’s whisked her away to his favorite stomping grounds, in the middle of nowhere. Surrounded by the charred remains of past meals, and not much else, Dany is forced to venture out for food and water. Only moments after doing so, hundred of Dothraki surround her, swarming in and packing around her in way that makes the Mother of Dragons fear for her life. Her only hope lie in the mismatched duo of Daario Naharis and Ser Jorah Mormont, both of which are determined to find their Queen.

Now Tyrion is left to rule Meereen with Grey Worm and Missandei, he has the experience of a ruler and they have the local connections. Nonetheless, it feels like a lost cause until the moment Varys shows up, his arrival practically ensures success. I cannot wait to see how Tyrion and Varys whip Meereen into shape! There is sure to be plenty of witty dialogue along the way.

The season finale packed a punch, the kind that makes you gag for air. Not only was it emotionally taxing, the heavy material reeked of defeat and promise, a common combo in the Game of Thrones realm. I’d hoped for something more from the season finale but all I felt was the cold absence of hope.