“Love Songs (In the Key of Gallagher)”

Isn’t that the truth? Sean couldn’t have said it better. And what a brilliant theme for a season finale: happiness. What does being happy mean anyway? For most of us and especially the Gallaghers it’s a personalized experience, something found in fleeting moments but it never lasts long enough to quantify.

Debbie’s still chasing her dream of “fitting in.” Becoming a teen mom is her way of belonging. She thinks she’s found the man of her dreams and she wants to be a part of his “perfect” family no matter the price. Little does she know, her juvenile thinking is going to cause more problems than it solves. If she wants to see what babies do to a relationship she ought to spend some more time with Kevin and V.

And of course Kevin and V got back together. Was there ever any doubt? They’re the neighborhood couple, they can’t break-up! If they break up there’s no hope for anyone else. They are the sane among the crazies, the pillar of stability in their community, in other words they have to make it work. If they can’t do it, no one can. Good on V for making Kev get tested. I love that Shameless writers are making a point about safety even if it’s an afterthought. 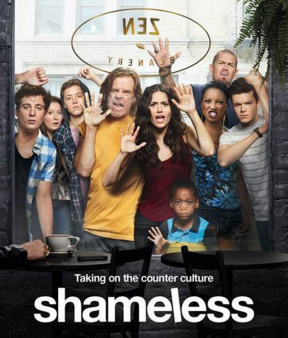 With Kev back at home, dorm life has gone back to normal – if there is such a thing for Lip. Though now he’s wrestling with some strange feelings. Is he really falling in love with his professor? Maybe it’s the lifestyle, the options and the power he feels. His hot married professor offers options Lip had never dared to dream about whereas Amanda offered Daddy’s money and casual sex. Despite the way Lip is trying to rise above his dysfunctional nature, he can’t help being attracted to complicated relationships. Neither can Fiona.

Fiona has the perfect husband, she even suspects as much and yet she can’t embrace her good fortune. The opportunity to change is right in front of her and she wants nothing to do with it. She wants Gus and Sean. She wants Gus because he’s a good guy and deep down she knows he’s good for her. Yet she prefers Sean. The addict who hired her when she was down, the guy she confides in because she knows he won’t judge her. Sean knows what a mess she is which is exactly why he won’t let her get any closer in spite of his obvious feelings. Love is a complicated thing as Frank has recently discovered.

Season five marks the first time Frank has ever been anything but self centered. Sure he was drinking primo whiskey and smoking crack, but it wasn’t for himself. It was for Bianca. In what had begun as a selfish maneuver to cash in on her death became one of the most romantic things Frank has ever done. They went to Costa Rica together where Frank made her the happiest she’d ever been until she couldn’t take the pain anymore. It was a bittersweet story and one of Frank’s most uncomplicated relationships.

No longer riddled with complications, Ian and Mickey are clear about where they stand and what they want. Mickey wants to take care of Ian, he professes his love and pledges to take care of him. Knowing what their future might look like due to his recent interactions with his deluded mother, Monica, Ian refuses to put Mickey through that. His disease is something he wants to deal with alone, or at least around people who understand what’s in store for them. I’m curious to see just how dedicated Mickey is. Will he fight for the love of his life or let him go?

Meanwhile Sammi has returned to the land of the living hellbent on getting revenge. Her little boy is stuck in juvenile hall playing race wars with Carl. (Chucky is in with the swastika-bearing skinheads and Carl’s happily teemed up with his fellow drug peddlers). I cannot wait to see where they take this in season six!

This was an incredible season finale, one the cast and crew should be proud of.