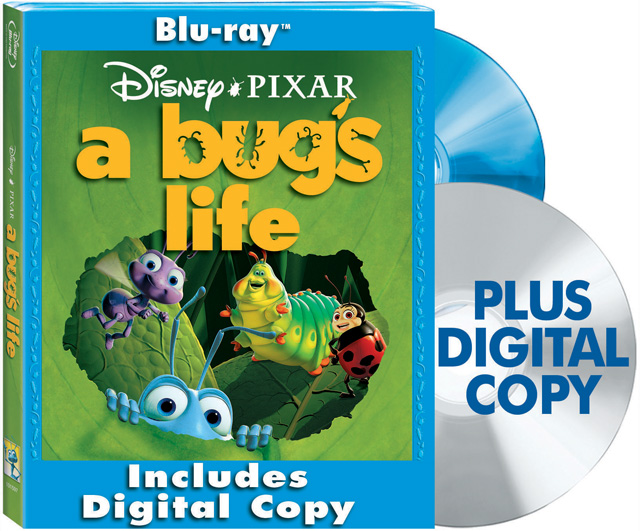 Eleven years ago, A Bug’s Life became Pixar’s second full-length feature film after the huge success that was Toy Story. With the company’s success riding on the sophomore effort, the pressure was on John Lasseter and crew to deliver. What Pixar brought forth was a groundbreaking story about lovable bugs. That’s right — bugs. That Lasseter and his highly-skilled team of Pixar animators were able to take the oft maligned insects and make them adorable was an achievement in itself, but coupled with the innovative CGI techniques and — what is really the core of Pixar’s success — powerful storytelling, A Bug’s Life solidified Pixar’s position as the new animation powerhouse for the entire industry to look to for inspiration.

In the grandest tradition of their then distribution partner and now parent company Disney, A Bug’s Life told the story of an ant named Flik (voiced by Dave Foley) with a streak of individualism, and a desire to invent and help break his colony out of the constraints of tradition. The colony, agonizing all year long to collect grain that they can leave as an offering for tyrannical grasshoppers led by one, aptly-named Hopper (Kevin Spacey), comes under pressure when Flik accidentally destroys the year’s offerings with one of his newfangled inventions meant to help the colony gather grain more efficiently. 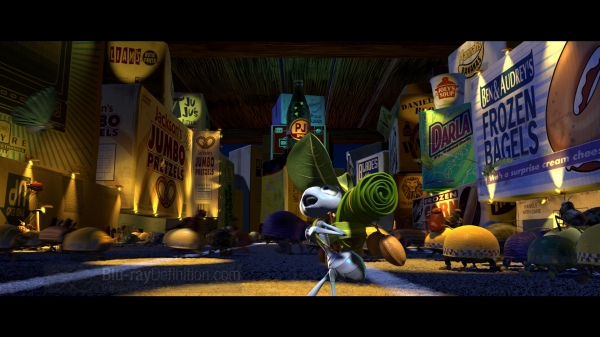 Convincing the colony’s Queen (Phyllis Diller) and Princess (Julia-Louis Dreyfus) that they should stand up for themselves and fight back against the grasshoppers, Flik sets off to the city to find big, warrior bugs to help the colony ward of Hopper and his gang of grasshoppers when they come back in the autumn to collect their tribute. Unfortunately, Flik only finds a circus troupe that mistakenly think he is hiring them for a performance.

A Bug’s Life is an inspirational film for young and old alike; a modern parable illustrating the wrongs of oppression. Like all Pixar films (and Disney before them) seem to do, there are some very dark, downtrodden moments that may frighten the youngest of viewers, but they serve to make the film’s dénouement all the more satisfying.

One cannot speak of A Bug’s Life without also making note of the marvelous animation. Although it is clear watching it today, eleven years later, that great strides have been made in the world of CG animation, it is still a beautifully rendered film. It, probably more than any other film of its time, set the standard for what was to come in the intervening years from Pixar and their runner up competitor DreamWorks.  From the realistic character motion to the cornucopia of colors that explode from the screen, A Bug’s Life is a spectacle of ocular delights, rendered all the more charming on this Blu-ray Disc release. 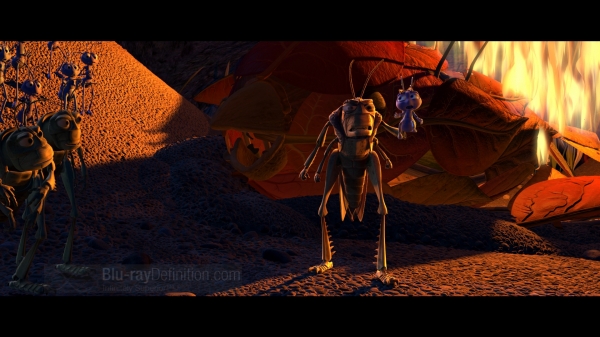 When A Bug’s Life was first released to DVD, it became the first DVD to be released sourced from its original digital master. This Blu-ray Disc release is once again sourced directly from the digital master, and Disney-Pixar have  done an amazing job bringing one of their beloved animated films to Blu-ray in a splendidly flawless AVC/MPEG-4 1080p/24 high definition encoding.  It would be easy to fall into the trap of thinking that because A Bug’s Life is a CG-animated production coming straight from the digital source that it is easy for this transfer to be rendered flawlessy, but that would be a mistake. Lots of things could go wrong and do harm to this transfer, like heavy-handed compression or post-processing such as edge enhancement. None of that is present here.

A Bug’s Life jumps from the screen in all its colorful glory, with great detail, like a child’s coloring book or an artist’s palette. The characters have a sheen that makes one want to touch them. Depth of field is impeccable, with the tiniest details in both foreground and background easily revealing themselves; when the ants swarm, each individual ant can be detected — sublime. 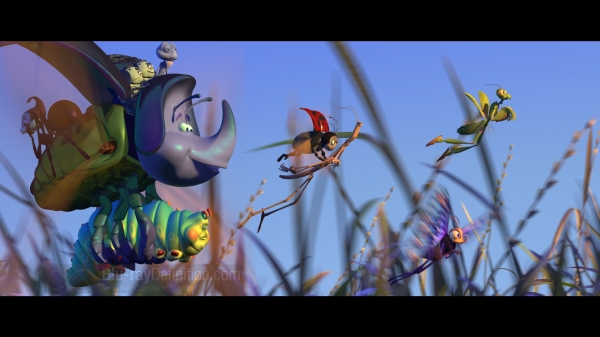 Going along with the excellent quality of its picture is an equally robust English DTS-HD Master Audio 5.1 (48kHz/24-bit) lossless mix that lives up to everything we have come to expect from Pixar on Blu-ray at this point. Dynamic, clean, engaging, and fully utilizing every channel, A Bug’s Life’s mix is full of discrete sound effects that engulf the listener. The easy sounds of the “natural” world of the ants’ island fill all the channels or the resounding roar of the grasshoppers wings beating as they fly around and rumble the subwoofer are just some highlights of this enthralling mix from Pixar. Of course, dialogue is intelligible, with only some slightly noticeable harshness in the early stages. 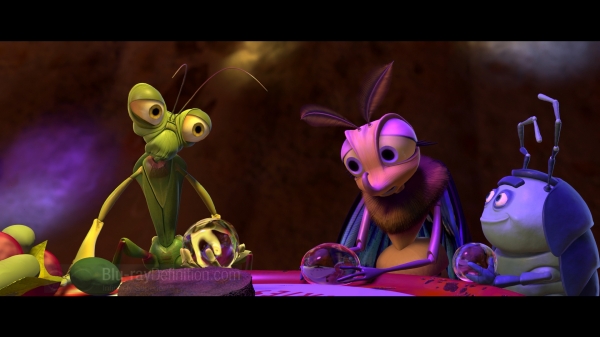 In keeping with Disney’s determination to push the boundaries of BD’s extra storage capacity, bandwidth and interactive capabilities, A Bug’s Life is loaded with the extras. There are Disney’s standard BD-Live features offering Movie Chat, Movie Challenge, and more, plus a host of additional bonuses. 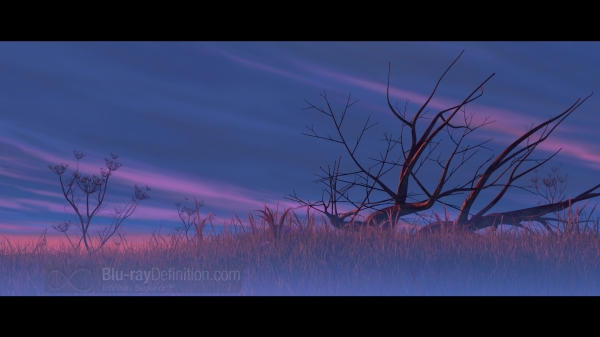 Disney continues to set the standard for high definition on Blu-ray Disc and A Bug’s Life is no exception. This is fine fun for the entire family in a value-added Blu-ray package with reference-quality picture and sound that is easy to recommend.