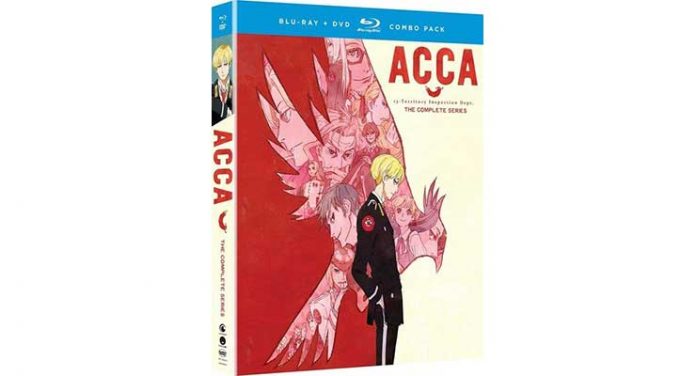 ACCA: 13-Territory Inspection Dept. is a mystery/drama anime series based on the manga series written and illustrated by Ono Natsume. Set in the fictional Kingdom of Dōwā, which is subdivided into thirteen autonomous states, the series follows the members of the massive organization ACCA, formed long ago by the threat of a coup d’état, the organization has continued to protect the peace and administer the thirteen districts for over one-hundred years.

At the center of the story is Jean “The Cigarette Peddler” Otus who has moved into the position of ACCA’s vice-chairman of the Inspection Department, second in command of the small department responsible for overseeing all the other branches. Tall, slender, and with a penchant for smoking cigarettes, Jean wanders the thirteen districts to ensure nothing is awry, but something is percolating in Dōwā; rumours of an impending coup to overthrow the heir to throne who will soon be taking over a being whispered and bandied about in quiet rooms. This brings Jean’s own mysterious history into play, as it is said that he may have royal blood and may well be the true heir to the throne – and is much more well liked than the immature Prince Schwann. Jean is devoted to ACCA more than he is to any possibility of sitting on the throne, but that doesn’t stop others from putting him under surveillance, having him observed by his very own friend, freelance reporter Nino, who is actually an ACCA surveillance officer codenamed Owl. As the story unfolds, we realize that a coup may not actually be out of the question, but who the perpetrators of the coup may be is the mystery that needs to be solved.

ACCA is a slow-burning series that blends many genres, but in a subtle way. It’s slice-of-life in the way it basically follows Jean on his daily routine, in his interactions with his sister Lotta, whom the Prince has a mysterious fascination with, and his love of just relaxing with a cigarette. It’s also a dystopian sci-fi thriller in that we know some event happened in the past that has sown divisions in the kingdom and created this vast, authoritarian bureaucracy. There are also the usual comedic elements to release the tension in the series.

I certainly enjoy the way the mystery of an impending coup slowly unfolds and the shifting players and questionable loyalties and how they are written in ACCA: 13-Territory Inspection Dept., but something about the lanky character designs creeps me out, to use a technical term. I’m aware they look similar to the manga designs, but they look odd and bug-eyed in the anime. That said, the artwork looks nicely detailed and refreshing unburdened by extraneous visual effects and overwhelming CGI. The ACCA uniforms definitely look intimidating, like a fictional 20th century fascistic organization’s would.

ACCA: 13-Territory Inspection Dept. looks solid in this AVC 1080p encodement to Blu-ray from Funimation. The color pallet of the series is somewhat reserved, with the primaries and the black of the ACCA uniforms standing out the most, but the colors are well balanced without any excessive saturation. We also get good brightness and contrasts, superb detail and no major flaws like aliasing or color banding.

ACCA: 13-Territory Inspection Dept. is provided with the original Japanese-language mix in Dolby TrueHD 2.0 stereo and an English dub in Dolby TrueHD 5.1. The 5.1 mix opens up the soundstage a bit over he somewhat claustrophobic sounding stereo mix, but the English voice cast is a little hit and miss. While both casts play this material with what seems to be a purposely listless affectation, some of the English voice actors tip over into sounding like they are merely bad actors reading from a script on numerous occasions.

I really enjoy the inclusion of the over-30-minutes-worth of “Special Featurette” episodes, which pretty much amount to short OVAs that give us more of a glimpse into the daily lives of the series characters.

ACCA: 13-Territory Inspection Dept. is an overwhelmingly cool slow-burner that wraps together a mystery with palace intrigue and slice-of-life into a series that has some interesting artwork, but sometimes off-putting character designs. The Blu-ray transfer and audio are on the money, but the English dub is a little too emotionless.

3.8 / 5 TheaterByte Rating
{{ reviewsOverall }} / 5 User Rating (0 votes)
TV-14TV Rating
MadhouseAnimation Studio
Funimation EntertainmentDistributor
Natsume ShingoDirector
Suzuki TomohiroWriter
300 Mins.Run Time
10 Apr. 2018Release Date
$64.98MSRP
1.78:1Aspect Ratio
AVC 1080pVideo
Japanese Dolby True 2.0 StereoAudio
English Dolby TrueHD 5.1Secondary Audio
EnglishSubtitles
The Story
The Animation
The Video
The Audio
The Dub
The Supplements
Summary
A hundred years after a coup d'état caused the creation of the vast ACCA organization, Jean Otus, vice-chairman of the organization's inspection department is tasked with journeying throughout the Kingdom of Dōwā's thirteen autonomous districts to ensure no foul play is afoot. His job is complicated by rumors of another impending coup and someone issuing surveillance on him. This slow-burning series of intrigue is weekended only by its odd character designs, but makes up for it with refreshing artwork and strong writing.
What people say... Login to rate
Order by: