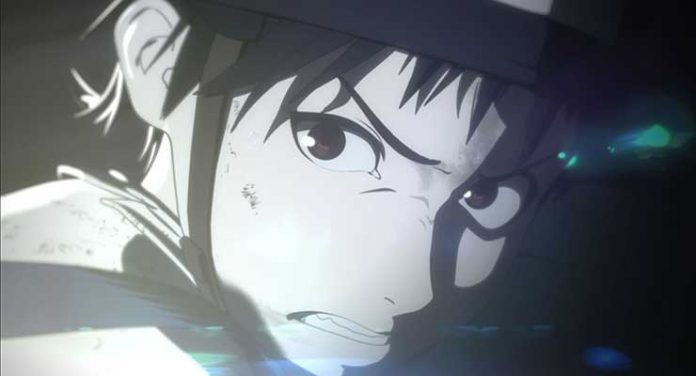 This global Netflix Original (excluding Japan) anime series is based on the Japanese manga series written and illustrated by Sakurai Gamon, directed by Seshita Hiroyuki and Andō Hiroaki with animation work by production studio Polygon Pictures.

During his time on the run, Kei learns more about his new condition while an underground group of Ajin who found out about secret experiments using Ajin launches a counterattack against the government and pharmaceutical company what was undertaking them. Their leader, Satō, wants to recruit Kei and other Ajin to bring the fight for the Ajin to the powers that be, but Kei pretty much wants to be left alone to live a peaceful life, something he finds or a time in the countryside living with an elderly lady who takes him in. But when he is found by the police and Satō leads a major violent attack in he city, Kei must finally stop dithering and make a decision about what to do.

The first season of Ajin (season 2 is available for streaming on Netflix now) is a fantastic watch. It is a complex amalgam of drama, horror, and sci-fi that leaves behind the typical cliché of high school anime series for some really intense action and riveting thrills.

Kei goes through major character growth from the beginning to the end, going from a typical high schooler to an almost callous and calculated monster, just like the so-called “black ghost” that manifests from inside of the select Ajins in the series to fight bloody battles outside of their inhuman hosts. There are grand questions asked in this series – are people who can’t die still human? Does being “undead” of sorts make one a monster or uncaring?

The imagery plays into the darkness of the series as well. One could be forgiven for thinking this was one of the excellent horror series from Bones, were it not for the 3DCG look of the animation. I am not a big fan of this style of animation, although there are definitely stylistic merits visually. My biggest complaints are with the look of the motion, which is very unnatural. The detail is spot-on, however, and it definitely puts us in a gloomy, scary, visceral world with this series. 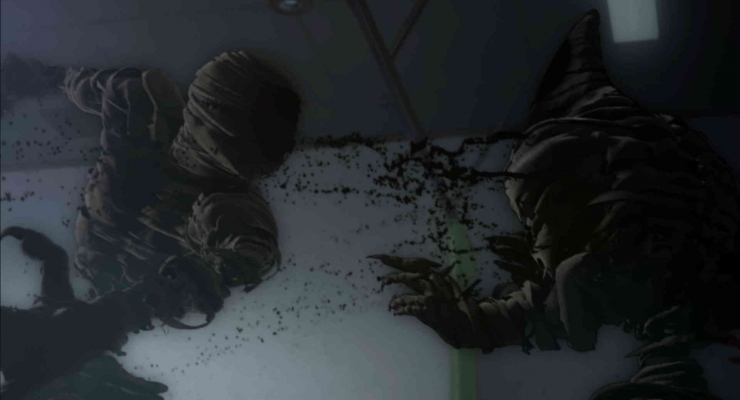 Ajin: Demi-Human Season 1 (and its condensed movie) comes to Blu-ray in an AVC 1080p encodement from Sentai Filmworks. I hate to say this, but just like the other Netflix Original anime series I have reviewed from Sentai Filmworks, Knights of Sidonia, this anime series actually looked better streaming that it does on this Blu-ray. This of course will depend on your bandwidth and display capabilities. The difference isn’t as great as it was with Knights of Sidonia, which looks spectacular on Netflix in Ultra HD with HDR or Dolby Vision, but there is still a noticeable difference here. There is a lot of banding in this image and it tends to look a bit soft.

Ajin: Demi-Human gets three fantastic lossless DTS-HD Master Audio 5.1 audio mixes. The original-language Japanese and English and Spanish dubs are included. All three of these tracks will have you jumping out your seat with solid sound effects in the surround channels, big low end, and wide dynamic range that goes from quiet dialogue to raucous noise and thunderous blasts. The English cast does a decent job, but to my ears the Japanese cast really capture the intensity of this series far better. I only sampled small portions of the Spanish track to get a feel for the quality and my lack of familiarity with the language keeps me from commentating on the actors.

If you don’t have the patience to sit through the whole first season, you can watch the edited down movie, which is included on a separate disc. Apart from that, a brief, 9-minute feature on the animatics process is included alongside the usual clean openings and closings with Sentai Filmworks trailers.

Riveting, gloomy, visceral sci-fi horror that sucks you into its action-packed madness, Ajin: Demi-Human is the kind of anime series that Netflix should continue investing in if they want to build up a following of loyal otaku subscribers. This Blu-ray from Sentai Filmworks has fantastic audio but drops the ball on its video quality.