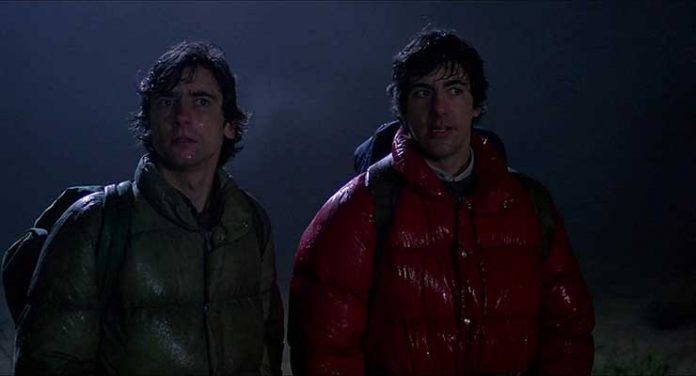 The story is about two American college students, David Kessler (David Naughton) and Jack Goodman (Grffin Dunne), traveling through the moors of Northern England when a beast of some sort attacks them. Jack is killed, but David survives only to awake three weeks later in hospital in London. Not remembering what happened to him, he’s told by his doctor (John Woodvine) and his attractive nurse, Alex (Jenny Agutter), that an escaped mental patient attacked him. Soon, however, David begins having vivid dreams and starts seeing his friend Jack appear to him as a living corpse. Jack tells David that the two of them were attacked by a werewolf, that David will turn into one as well at the next full moon and begin to kill people. Telling David that he’s been condemned to drift in purgatory as long as the last werewolf line lives, Jack begins to urge David to take his own life to stop the cycle.

Eventually David is released from hospital and moves in with Alex, but he is still tormented by his dreams and visions of his friend Jack, until finally the full moon arrives, and he goes on a rampage through London.

An American Werewolf in London is a slow-burning horror film, nothing like the horror of today. It’s almost amusing to think now that the film had problems getting past the ratings board in its original cut. More campy than gory, it was nevertheless innovative for its time and did in fact win an Oscar for make-up. It would go on to influence the long-form music video for Michael Jackson’s “Thriller,” and become a perennial Halloween classic.

An American Werewolf in London was originally shot on 35mm and it is presented here in a brand new 4K restoration from 2018. This film has never exactly looked great, being a bit soft in some frames and even showing excess graininess and lens dirt. While some of that is still there, this new restoration is a vast improvement over the previous 2009 Blu-ray release from Universal. The image looks a little cleaner, a little crisper, and has better color preproduction and shadow nuance, which can really be seen in the crazed scene in Piccadilly Circus at nighttime, where the lights and phone boxes have excellent color, the black levels are superb, and the image really ‘pops.’

Arrow includes the original monaural mix in DTS-HD Master Audio 1.0 and a DTS-HD Master Audio 5.1 mix for An American Werewolf in London on Blu-ray. Both mixes sound great. If you’re a traditionalist, you’ll get pretty clear and clean dialogue and foley effects mixed into the center channel with the 1.0 mix. The 5.1 mix, you’ll get good atmospherics with some discrete sound effects like howling off to the sides when the guys are on the moors that add to the suspense.

An American Werewolf Limited Edition from Arrow is packed to the hilt with fantastic bonus features including a few excellent, new documentaries that explore the Universal history with werewolf horror and the classic Beware the Moon documentary. Plus, we get a lot of swag, as to be expected with an Arrow release.

This camp horror classic that harkens back to the Universal horror moves of old gets a strong 4K restoration on Blu-ray and an abundance of superb bonus features and extras in this limited edition release from Arrow.

An American Werewolf in London (Limited Edition) is out on Blu-ray October 29, 2019 from Arrow Video