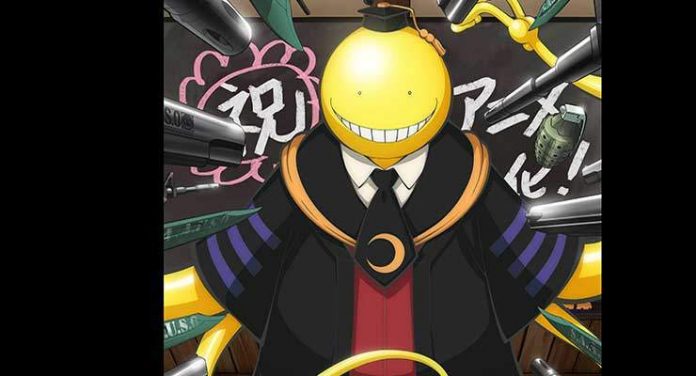 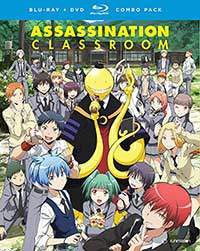 The series is epicly funny, witty, and, well maybe a little touched in the head, if a series has a head, but you know what I mean. Koro Sensei has to be one of the most demented yet, at the same time, enjoyable and likable 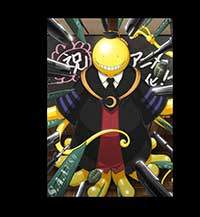 characters I’ve come across in anime. He’s an evil, umm, octopus (?) who wants to destroy the planet, and he’s also self-serving and egotistical, but he also cares about his students and being a teacher. Very weird. And the funniest of all are how the students invariably begrudgingly like him, while also compete to try to kill him. Did I mention there is a reward in billions of Yen to the one who succeeds and their family?

The animation is top-notch, blending a very moe look in many of the students, with their brightly colored hair with their grey school uniforms and an often-angular style of animation. As for Koro Sensei, his bright yellow color and demented “Have a Nice Day” smile offer a sharp contrast to the other animation styles.

This series is definitely a step above many of the other comedies I’ve seen as far as its originality and quality of animation.

The AVC 1080p encodement for Assassination Classroom looks very good. The mixture of primary colors, especially the bright yellow of Koro Sensei, and the cooler shades of the student uniforms look excellent. The detail is sharp and free from noise, aliasing, or motion artifacts. This has a very enticing look overall.

I have to say that having been rather impressed with many of the audio tracks on the latest FUNimation releases, the sound on this one just wasn’t doing it for me. It sounded like the dynamic range was once again not there. That said, the Japanese Dolby TrueHD 2.0 track and English Dolby TrueHD 5.1 track, respectively, offer good voice performances, and I don’t usually care much for the English dubs. The English voice cast does a good job on this one, however, almost sounding as witty and realistic as the Japanese cast. The 5.1 mix itself is just a little lackluster, given that the surround effects don’t really standout much.

We get a strong set of extras on this Part One release of Assassination Classroom, including two audio commentaries, Episode 0 “Meeting Time” an interview the English cast, and the usual promos and trailers.

These first 11 episodes of Assassination Classroom are fantastic. Period. This series is witty, whacky, and twisted in the best way possible. The animation is a cut above many others in the same genre and I am now a total convert to this franchise.