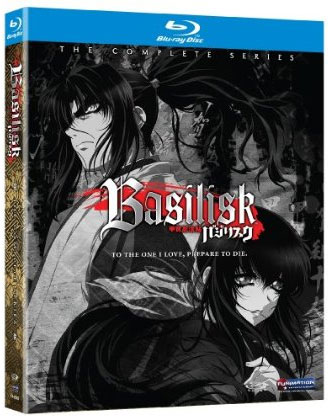 The basilisk, the mythical reptilian beast known as the king of the serpents, born of a serpent from a cock’s egg, and reputed to be able to kill with no more than a gaze from its eyes. It is fitting, then, that this series should take its title from this magical beast as Basilisk the series itself is filled with magic and mysticism. What’s more, the two lovelorn protagonists at the center of the story themselves possess the power of “mystic eyes” capable of striking down their opponents with a glance. 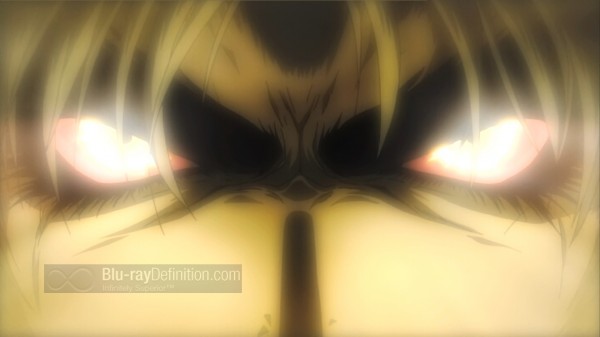 Basilisk: The Complete Series was taken from a manga written by Masaki Segawa published in Japan in 2003 and 2004, which was in turn based on a 1958 novel entitled The Kouga Ninja Scrolls by Futaro Yamada. The story follows two rival ninja factions, the Iga and the Iga, in feudal Japan caught in a centuries-long war against each other filled with hatred and malice. Each clan is headed by a group of ten warriors practiced in the art of ninjitsu, with each warrior having their own unique mystical power.

Basilisk takes place in 1614 as an uneasy peace has finally been brokered between the two clans. Caught betwixt the tensions are the two Romeo and Juliet-type lovers, Gennosuke of the Kouga, leader of Kouga clan and Oboro of the Iga, granddaughter to the leader of the Iga and next in line to lead them. Just as the two are to be wed and to unite the Iga and Kouga people, the clans’ two leaders break the brokered peace accord when they kill each other. The fighting between the Kouga and Iga breaks out again, and Gennosuke and Oboro, their love for each other still in their hearts, become reluctant enemies.  Each side battles to posses the Ninja Scroll that contains the names of each of the Ten from the Kouga and the Iga so they may cross the names of the slain off in blood from the list. Things quickly spiral out of control within days of the peace being broken.

Basilisk is a series filled with longing, love, betrayal, and of course, violence. It has all of the elements that go into good drama, excellent character development, a well-developed plot and, most of all, an interesting premise. From the melancholy of lost love to realizations of hard choices that must be made against one’s own desires, Basilisk has it all. The artwork is sublime and the atmospheric music helps to build the tension and drama throughout the series. This is a must see event for any anime fan. 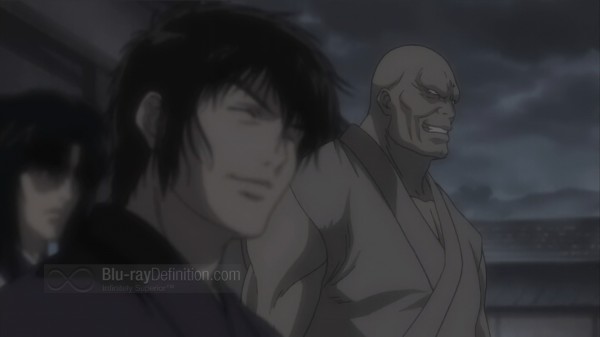 Heavy compression artifacts straight through the presentation plague Basilisk’s 1.78:1 AVC/MPEG-4 1080p encoding from Funimation. The image variously suffers from posterization, blocking and some haloing around the line art. There is also an overall softness to the image that keeps Basilisk from looking as sharp and detailed as it could.

On the plus side, color reproduction is strong and apart from some banding that appears to be a part of the original source, there are vibrant vermilions, vivid shades of blue and deep blacks. 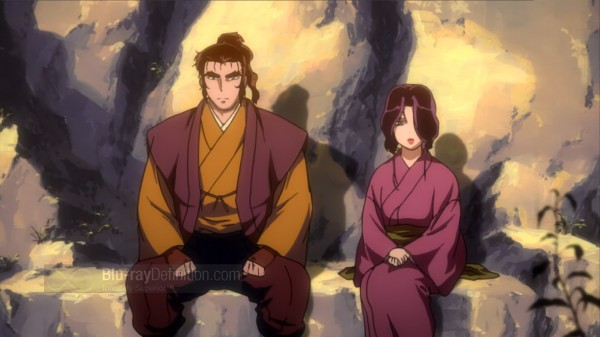 Basilisk comes with an English Dolby TrueHD 5.1 (48kHz/16-bit) lossless soundtrack in addition to the original Japanese language track in a lossy Dolby Digital 2.0 (640kbps) variety. It is unfortunate not to see a lossless 5.1 track for the original Japanese version, but the English TrueHD mix is quite good nonetheless. There are extended low frequencies that enhance the numerous fight sequences, high frequencies are not tweaked and there is a nice amount of ambience in use. Atmospheric effects abound and are panned throughout the soundstage, from rainstorms to breeze rustling through trees. Some discrete sounds are panned into the rear, especially during the fight sequences, but the mix never becomes too busy. Dialogue is clean and never lost in the fray of all the other sound effects.

The Dolby Digital 2.0 Japanese mix is bit disappointing, however.  Dialogue sounds little pushed and too forward in the mix. It also suffers from some emphasized sibilance in the speech and harsh sounding high frequencies. The ambience sounds tight, but midrange is solid and low frequencies are still nicely extended. 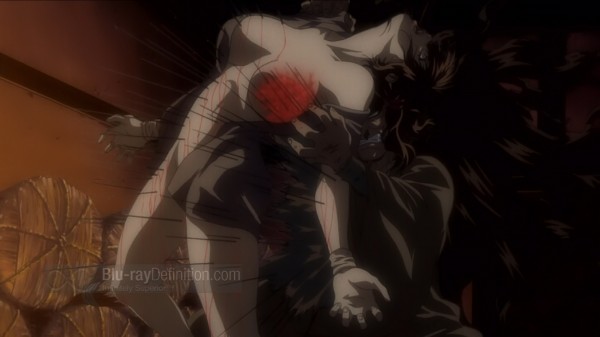 The bulk of the supplements for Basilisk reside on Disc 3 and they consist mostly of members of the Japanese voice cast discussing their work in certain scenes from the series in various round table discussions. 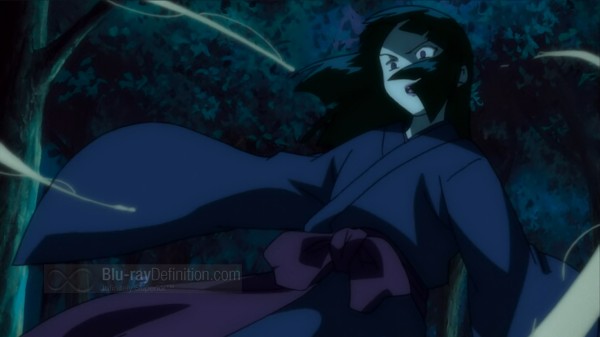 Basilisk is at once heartbreaking and exhilarating. It is another in a long line of anime series that elevates animation to the level of a true dramatic art form. This isn’t just a “cartoon,” this is serious stuff. It is nightmarish and brutally honest. The video transfer to Blu-ray from Funimation  may falter, but the audio quality will still impress and overall this will still be far superior to the DVD version. Recommended.