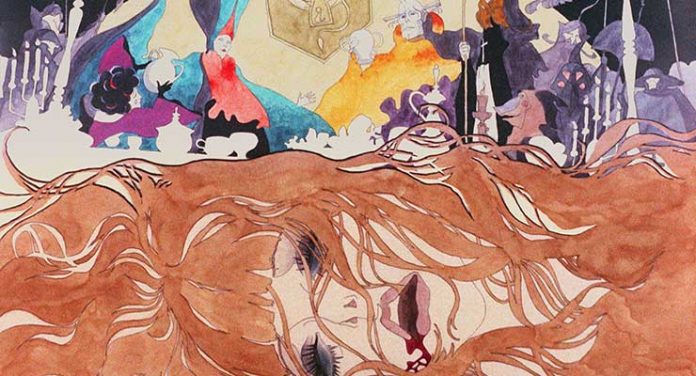 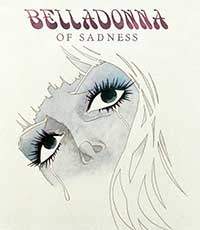 the film, from a French novel by Jules Michelet , follows the story of Jean (Itô Katsuyuki) and Jeanne/Belladonna (Nagayama Aiko).

On the night of the couple’s nuptials, the local lord asserts his droit du seigneur, or the supposed right of feudal lords to have sex with women subordinate to them on their wedding nights. Jeanne is violently raped by the lord and his minions, and returns home to Jean, who is despondent. That same night, a phallic symbol (voiced by Nakadai Tatsuya from Kurosawa’s Ran) of the devil inside of her appears to Jeanne and encourages her to take revenge on the people who wronged her. Jeanne enters into a pact with the devil and becomes a powerful, feared witch overseeing life, death, and drug-fueled orgies.

Belladonna of Sadness received a brand new 4K restoration courtesy of Cinelicious Pics, SpectreVision and The Cinefamily. The new restoration, which I had the pleasure of seeing on the big screen at a special press screening in April of this year (2016), is gorgeous. It was completed in-house at Cinelicious from the original 35mm camera negatives. Material censored from the negative was recovered using a 35mm print from the Belgian film archives. The film arrives on Blu-ray in an AVC 1080p encodement framed at its original 1.33:1 in what is a very accurate representation of how it looked in the theater. Grain is still present, but not overwhelming, the textures and details are there with only a slight bit of film softness and the rare bit of source damage – and I do mean rare. Colors when they are utilized absolutely explode from the screen.

The original Japanese monaural soundtrack is provided in DTS-HD Master Audio 1.0, and it is clean and fairly

dynamic and ambient given the single track. The jazz fusion score sounds punchy.

The interviews and booklet included with this Blu-ray are immensely informative and interesting. Additionally, animation fans will be delighted at the three trailers

which offer three more looks at the beautiful artwork.

Belladonna of Sadness is an important landmark in Japanese filmmaking and the world of anime. Its groundbreaking artwork, eroticism and character designs would set trends for decades to come, not only in Japan but around the world. Yamamoto Eiichi’s work has finally received a proper, official U.S. release and is ready for rediscovery, exploration, and reexamination. If you haven’t yet had the opportunity to see this film in its limited theatrical run, then this Blu-ray is the perfect way to view it, almost as good as seeing it in the theater.