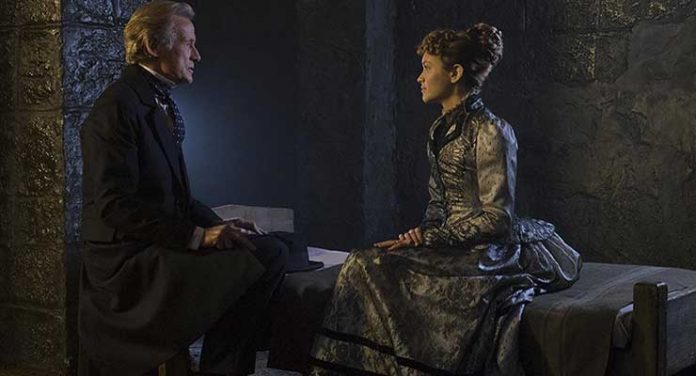 With only his second feature film, director Juan Carlos Medina (Painless) brings the Peter Ackroyd (Kingsman, The Woman in Black) novel The Limehouse Golem to the screen. Set in Victorian era London, this horror/thriller concerns a Jack the Ripper-like killer that has terrorized the community. It begins, as the narrator says “at the end” when famous music hall girl Lizzie Cree’s (Olivia Cooke) husband John (Sam Reid) is found dead in the couple’s home. The police suspect Lizzie has poisoned him after the couple’s housemaid Aveline Ortega (María Valverde) tells them of an argument the couple had the night before. When the famous Inspector John Kildare (Bill Nighy) arrives to investigate the so-called “Limehouse Golem,” the name given to the brutal serial killer that until now no one has been able to catch, his long list of suspects includes music hall star Dan Leno (Douglas Booth) and the tangled web leads him to seeking out the help of Lizzie Cree, whom he believes to be innocent of the crime she is charged with – and also possibly connected in someway to the Golem.

Without giving too much away – because The Limehouse Golem has some twists you will never see coming – this Victorian thriller is one of the best I have seen in a long time. The mystery keeps you guessing all the way through with a cast of eccentric characters, a story within a story that takes place both in the present and through a play in the dance hall – handled deftly by director Medina – and excellent casting choices. Nighy, whose Inspector Kildare has a troubled past that is hinted at often, plays his role with great subtlety. The standout, however, is definitely Olivia Cooke who is innocent, coy, and withering in her role as the troubled orphan who rises to stardom in the music halls, but longs for the respectability of real acting roles.

The film also looks gorgeous. Kudos must be paid to the set and production design team for placing us in a grimy, and shadowy Victorian world where a violent killer is on the loose and to Medina and his cinematographer Simon Dennis (Black Sails, Kill Command) for making a visually engaging film absolutely dripping in long shadows, candlelight and the famous London fog of the 19th century that one would imagine a killer of the era who left messages in his victims’ blood would creep out of. 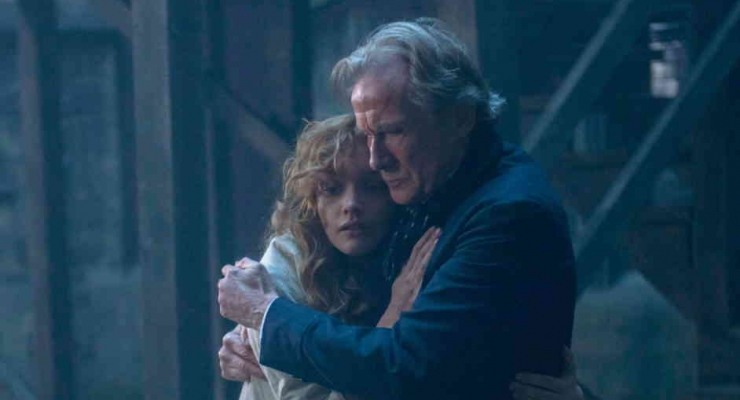 The Limehouse Golem was shot in the Todd-AO 35 anamorphic format and a 2K DI was utilized in postproduction. The film arrives on Blu-ray in an AVC 1080p encodement from RLJ Entertainment that looks very filmic and shows lots of detail with minimal banding and noise. The shadow detail is good given how much of this film takes place in darkened rooms and alleyways.

The Limehouse Golem is provided with a DTS-HD Master Audio 5.1 mix as the sole audio option on Blu-ray from RLJ Entertainment. It’s a fantastically balanced and atmospheric mix that will send chills down your spine. The opening act where Bill Nighy’s John Kildare first arrives in the carriage places you right in the din of the crowd as the chatter of voices from the streets surround you, but not in a loud overwhelming way. The mix continues like that throughout the film with subtle discrete sounds coming from the surround channels, a good wide stereo mix across the front, excellent ambience, and clean dialogue with the score sounding airy and unobtrusive, but chilling and audible when necessary.

The included supplements are explanatory and play more like EPK material than anything deeply analytical.

An eerie and shocking thriller with a wild twist ending no on will see coming, this Gothic horror is perfect for the cold weather season and the post-Halloween horror season. The cast are all brilliant and the Blu-ray is a solid effort.

The Limehouse Golem is out on Blu-ray & DVD from RLJ Entertainment on November 7, 2017.

3.5 / 5 TheaterByte Rating
{{ reviewsOverall }} / 5 User Rating (0 votes)
Number 9 Films | RLJ EntertainmentStudios & Distributors
Juan Carlos MedinaDirector
Jane Goldman (screenplay) | Peter Ackroyd (based on the novel by)Writer
109 MIns.Run Time
$29.97MSRP
7 Nov. 2017Release Date
2.35:1Aspect Ratio
AVC 1080pVideo
English DTS-HD MA 5.1Audio
English SDHSubtitles
The Creative Content
The Video
The Audio
The Supplements
Summary
An inspector with a troubled past (Bill Nighy) seeks out the help of a a famous music hall actress (Olivia Cooke) who sits in prison charged with murdering her husband to help find a brutal killer known as the "Limehouse Golem" that has been terrorizing the area in this visually stunning, eerie, Victorian-era Gothic thriller that keeps audiences enthralled with its mystery and unxpected twists.
What people say... Login to rate
Order by: