Vaughn plays married out of work former boxer Bradley Thomas recently laid off from an auto shop. Desperate to save his marriage to wife Lauren (Jennifer Carpenter) who has cheated on him, and to earn cash in order to get the two of them out of the dive home they’ve been living in, Bradley starts running drugs for old associate Gil (Marc Blucas), promising his wife he’ll only do it for a short time. Fast forward a few years and Bradley and Lauren are living the life of luxury in a big house and a baby on the way, Bradley now Gil’s right-hand man. Bradley is tapped to set up a new drug connection and the deal goes sideways, and the new guys end up in a shootout with the police, which sets Bradley against the new guys, saving the cops’ lives, but getting himself arrested. He ends up sentenced to seven years in prison and his wife Lauren is then kidnapped by a hitman (Udo Kier) who threatens their unborn child with an abortionist if Bradley doesn’t get himself transferred to a notorious prison in order to carry out a hit for a client to payback the debt he owes for the bad drug deal. After turning violent and getting himself transferred, Bradley meets up with a sadistic warden (Don Johnson) and must get himself into the secret torture ward known as Cell Block 99 to carry out his assignment, where he will stop at nothing to ensure the safety of his wife and child.

Brawl in Cell Block 99 starts off slowly and seems at first like any other crime drama that eventually passes through a prison, but, boy, is not that. This is pure pulp revelry that doesn’t let up once it takes its twisted turn into the unabashed world of grindhouse cinema. Brutally violent and hammy, but never tipping over into the absurdly acted, Vaughn’s acting seethes and Don Johnson is a believably dangerous nemesis.

Zahler bathes Brawl in Cell Block 99 in shadow and the imagery of S&M dungeons more than actual prisons in the entire second half of the film. The interludes of classic soul and funk allude to the exploitation films of the 1970s that are so obviously a big influence on this one and which Zahler so easily plays around with in a contemporary setting.

If you want to see a riveting piece of pulp fiction that not directed by Quentin Tarantino, then Brawl in Cell Block 99 with its top-notch cast and unapologetic stomach churning brutality is the movie for you. 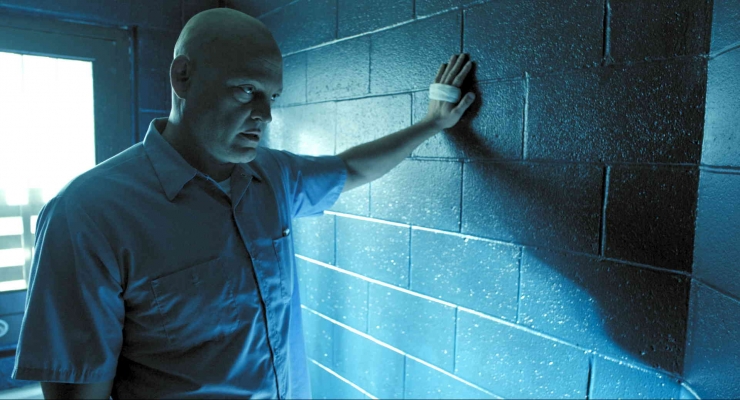 This film arrives on 4K Ultra HD in an HEVC 2160p (4K) encodement framed at 1.85:1. This is one of the rare Ultra HD discs that is not mastered in HDR (High Dynamic Range), joining only one other I have had the opportunity to review, Hickok, and another forthcoming Ultra HD review Mayhem, and a German import release of Neon Demon on 4K Ultra HD. The image doesn’t have the immediately apparent leap in quality over the Blu-ray without HDR and, depending on your screen size and viewing distance, you may not notice it, but on my 65” LG OLED65E6P at 6’ away, I see a definite improvement in clarity and sharpness. There’s also excellent depth of field and nuance in the shadows, although the color gamut is the same as that on the Blu-ray, which is also good, just not quite as crisp and filmic.

The film comes with an English DTS-HD Master Audio 5.1 mix that carries the anachronistic soul music soundtrack flawlessly giving the music good midrange punch and air. It also gives the fight sequences lots of low end punch and dialogue is clean and full. There are good atmospherics and some occasional solid sound effects in the surrounds.

There are only two special features included in what is a rather bare bones release. They do offer some interviews with cast and crew, which are cool to watch.