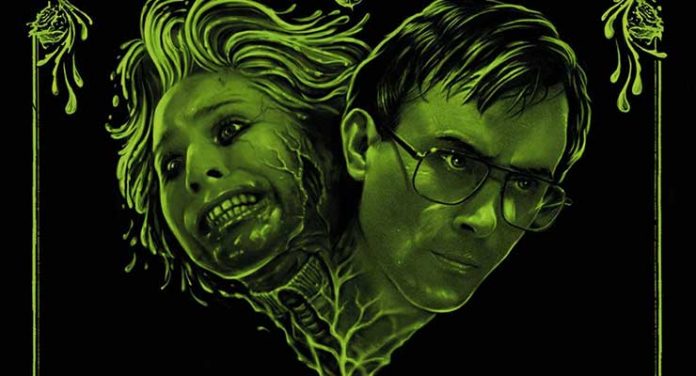 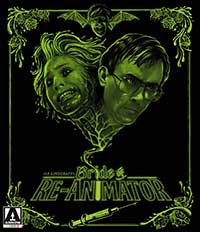 The dead can’t seem to stay dead in the 1989 film Bride of Re-Animator. Several months have gone by since the events of the “Miskatonic Massacre.” Dr. Herbert West (Jeffery Combs) and Dr. Dan Cain (Bruce Abbott) have travelled to Peru to volunteer their medical services during a bloody civil war. This gives them an unlimited amount of test subjects in which they can continue to work on dead people and continue to experiment with their serum that had ghastly consequences in the States.

Having now returned to the States and back to their old stomping ground of Miskatonic Hospital they continue with some of their experiments behind close doors. Dr. Cain has developed feelings for a patient that is terminally ill while Dr. West continues with his work and tries to create more serum. When Lt. Chapman begins snooping around the hospital due to missing body parts – another doctor by the name of Graves discovers Dr. Carl Hill’s (David Gale) severed head and some leftover serum. He injects the head and reanimates the severed head. Hijinks will inevitably ensue.

Bride of Re-Animator is not a great film in terms of story, in fact, some might say that the film squanders the premise due to there being several instances of glossing over what came before it – namely, the first film. Dr. Hill’s severed head opens up the film with some foreshadowing and the boys end up in Peru less than a year after the incidents in the first film. Considering the blood bath that ensued in the first film how is it that they have returned to the same hospital they ditched before? It doesn’t matter, because Bride of Re-Animator was a film that was made by the seat of its pants. There was money and people who wanted to make it therefore it got made. Yeah, so there are several inconsistencies but Jeffery Combs steals the show as Dr. West.

Back in the laserdisc days I had rented the unrated version of this film and nearly threw up due to how gross the FX work was during certain scenes. The dead victims that survived (yeah, I know) the events of the first film are treated in a psychiatric ward are the culprits. Sure, it wasn’t so bad now, being older, but those special effects make-up creations still look disgusting.

The makers of the film also decided to go the way of Bride of Frankenstein and introduce a creature made up of several different female body parts and internal organs. She serves to be the ultimate test of Herbert West’s magic potion. Oh, and Dr. Hill is still around. He is still a severe head that has bat wings grafted onto his head and can control those that have been injected with West’s potion. The how and why of that is never explained but it looks damn cool.

Bride of Re-Animator is the guiltiest of pleasures that brought so many great and talented special effects make-up artists together that even if you hate the film, which I don’t, can still appreciate the tremendous amount of artistry on display in the film. This Blu-ray release by Arrow Video is probably the best version of the film(s) there ever will be. Whether the film makes sense or not – one can say that everything including the kitchen sink has been thrown at it and it has stuck.

Bride of Re-Animator is presented in 1080p (both Unrated and R-rated versions) and are in 1.85:1. The unrated version of the film has never looked better. Both cuts of the film have new 2K restorations and look great. The down side is that some of the unrated footage/frames in the unrated cut can sometimes easily be identified, because the color levels get dull and drab. Obviously the reinserted footage may not have always been kept in the greatest of storage areas. Contrast and sharpness levels are great and the film grain structure is steady and debris, dirt, scratches, etc., are kept at minimal levels. Color banding and pixilation was not a problem. This is the definitive transfer brought to you by the folks over at Arrow Video. Enjoy!

Bride of Re-Animator  (both cuts) is presented in English LPCM 2.0 stereo. The musical cues are what seem to be more memorable, because it’s reminiscent of the Psycho soundtrack. Dialogue levels are clear and everyone’s ranting and ravings sound crisp and clear. Jeffery Combs sounds downright eloquent in an insane way and the 2.0 soundtracks handle it nicely. There’s an incredible amount of depth to be found in this audio track since all of the elements share two speakers. It didn’t feel harsh or cluttered.

This 3-disc ultimate set features several commentaries featuring director Brian Yuzna – on a solo track – the cast is featured on a separate one, and the director and special effects make-up crew on another. They’re fun and informative. Rounding out the special features are several new interviews with Brian Yuzna and some of the brilliant special effects make-up artists that created the monstrosities for the film. Deleted scenes and vintage material are also included. The Rated-R version of the film is also presented in HD on its own separate disc.

Bride of Re-Animator holds up amazingly well more than 25 five years later. It’s a testament to the minimal direction and cutting-edge special effects work. You had some real veterans of the industry collaborating with newbies (KNB had just started and are one of the top-3 fx houses in Hollywood today) to bring some of H.P. Lovecraft’s visions to the big screen. This phenomenal Blu-ray set from Arrow Video cements the film on home media for all time. Arrow Video is on a rampage in terms of producing some of the best Blu-ray packages around. If they keep at it some of their releases will no-doubt make it to my Top-10 of the year list. Bride of Re-Animator is highly recommended!