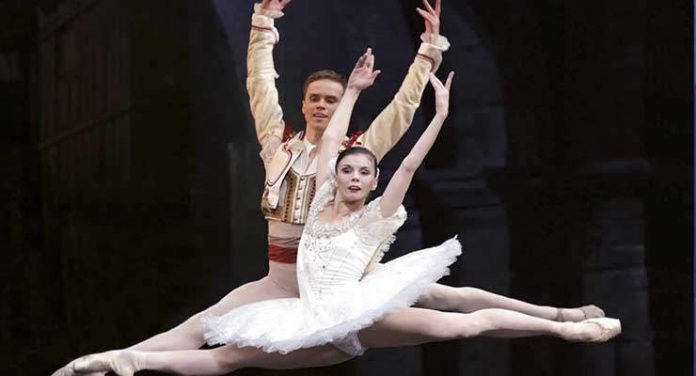 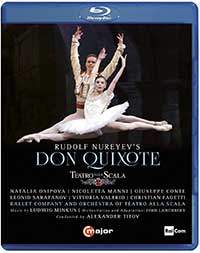 There is a nostalgic backstory to this ballet video. Young Russian principal dancer Rudolf Nureyev made his stage début in the role of Basilio with the famed Kirov Ballet at the age of 21! Readers of Miguel Cervantes’s epic novel need not expend too much energy on this dance reincarnation of 16th century Spain as Don Q (Giuseppe Conte) and his aide Sancho Panza (Gianluca Schiavnoni) are quickly pushed to the background allowing plenty of time for younger protagonists Kitri/Dulcinea (Natalia Osipova) and Basilio (Leonid Saranov). The lengthy novel receives a substantial balletic revision as the dances focus mostly on the young lovers as the Don and his companion try to unite Kitri and Basilio against the wishes of her father Lorenzo (Matthew Endicott) who has intended his daughter for wealthy suitor Gamache (Riccardo Massimi).

This rendition has a far greater comedic flair than the one that I reviewed five years ago from the Dutch National Ballet Company. Nureyev’s reconceptualization of this classic emphasizes physical humor of which there is plenty to behold and enjoy. The Spanish element rises to the foreground and is interlaced through all three acts. The success or failure of this program rests on the shoulders (and feet) of the principals and here Osipova and Saranov deliver outstanding routines.

Ludwig Minkus’s atmospheric score is unerringly delivered by the Orchestra of Teatro alla Scala led by Alexander Titov. The operative word in this entire production from start to finish is fun. Forget about the novel and its various episodes, some of which are actually included, this is what classical dance is all about and this is exactly what we get.

Video director Patrizia Carmine clearly understands the world of dance and we are rewarded with fabulous coverage of the ballet sequences. Colors are gorgeous and the overall it is palpably natural.

Surround and two-channel versions are quite similar since there is little happening the extra channels. Stage noise is kept at a minimum.

C Major’s booklet gives us production and performance credits, dance listings, and a background piece on this ballet. Trailers of other CM Blu-ray Discs are included.

Taken as a whole, this version of the Minkus ballet is a sheer delight. One must remember that the title character and his aide-de-camp are out of the spotlight for most of the action. The Spanish influence in costumes and choreography is abundant and most welcome. The corps is outstanding and the principals beyond reproach. Balletomanes rejoice and get this one while it is still hot!