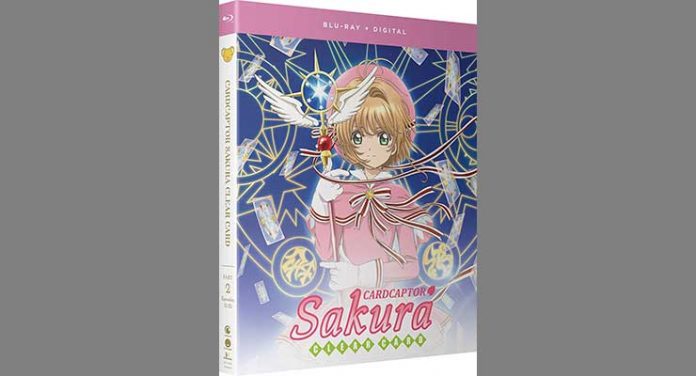 In this series, Sakura is now in junior high and the series begins with all of her magical cards going blank and her losing all of her powers. After a prophetic dream about a mysterious figure, Sakura goes on a quest for answers with her friends using a newly discovered and much more powerful mystical dream key. This ‘part two’ collection continues the series as Sakura tries to capture more Clear Cards and learn more about the mysterious figure who continues to appear in her dreams.

As with the original series, Cardcaptor Sakura: Clear Card is a blend of comedy, magic, and general slice-of-life charm. There’s no strong story arc here, and often it feels like the stories from one episode to the next are barely connected outside of the basic idea of Sakura searching for cards, coming up against antagonists, and dealing with her school life.

With the original cast returning to reprise their roles and Asaka Morio, Ohkawa Nanase and Madhouse all onboard for writing, direction, and production from the original series, Clear Card is successful at keeping the tone of the original series, but the animation style feels different. Of course, the techniques and technologies have changes vastly in the intervening years, but also the character designer has changed, with Takahashi Kumiko taking over for Hamada Kunihiko. I know the characters are meant to be older here, but they also look a little too lanky to me.

Cardcaptor Sakura: Clear Card — Part 2 comes to Blu-ray in a 1.78:1 AVC 1080p encodement. The picture quality is passable, but there is an overriding softness and a sort of ‘milky’ veil over the image that makes colors look a bit washed out as well. There is also the occasional issue with some visible stairstepping or aliasing around line art.

The original Japanese-language track comes in a Dolby TrueHD 2.0 stereo mix and an English dub is also included in Dolby TrueHD 5.1. Neither mix has great dynamic range, but the stereo imaging is pretty good on the Japanese track and it is generally the superior of the two especially since we get to hear the original voice actors from the original Cardcaptor Sakura all reprising their roles.

Only textless opening and closing animations and a Funimation digital code are included in this release.

This is not a perfect series and perhaps too many years have gone by, but this series is still enjoyable, even if it doesn’t seem as magical as the original. Part Two answers some more questions, but the Blu-ray still doesn’t look or sound top tier.

2.9 / 5 TheaterByte Rating
{{ reviewsOverall }} / 5 User Rating (0 votes)
TV-PGTV Rating
MadhouseAnimation Studio
Crunchyroll | Funimation EntertainmentDistributor
Asaka MorioDirector
Ohkawa NanaseWriter
275 Mins.Run Time
02 July 2019Release Date
1.78:1Aspect Ratio
AVC 1080pVideo
Japanese Dolby TrueHD 2.0 StereoAudio
English Dolby TrueHD 5.1Secondary Audio
EnglishSubtitles
The Story
The Animation
The Video
The Audio
The Dub
The Supplements
Summary
In the second part to this sequel to the beloved classic magical girl anime series, Sakura, now in junior high, continues her quest for Clear Cards, and answers to the mysterious individual appearing in her dreams. A revelation from a friend may hold the key to everything. The Blu-ray is barebones, and the image is a bit subpar, but overall, even if this series doesn't live up to the magic of the original series, it's still fun.
What people say... Login to rate
Order by: