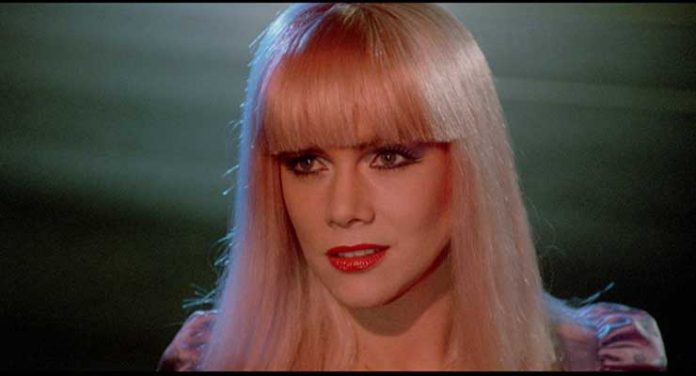 Bobby Grady (John Laughlin) is a married father of two, has a lackluster marriage and dabbles in surveillance and electronics in the seedy side of town. Bobby gets hired to investigate the lovely Joanna Crane (Kathleen Turner) – a fashion designer suspected of stealing and selling designs to rival competitors.

Joanna Crane also has a secret. She leads a double life as China Blue – one of the sultriest prostitutes you will ever encounter. She has a hunger for hard times and hard sex and makes no quips or quarrels about her ways.

Completing the twisted trifecta is Anthony Perkins – as a “street preacher” character of sorts who wants to save China Blue’s soul from eternal damnation – even if it means selling his soul in the process.

Crimes of Passion was Ken Russell’s second U.S. feature after Altered States. I was not aware of the Crimes of Passion until I watched an old trailer and Arrow Video’s promotional materials on it. I guess they timed this new video version of the film with The Neon Demon’s theatrical release in terms of visuals. If you notice Crimes of Passion’s cover art it’s very chic, very ’80s, and very neon.

As far as the film itself goes it is a gargantuan cheese-fest. Production values are terrific – again, taking place in 1980’s L.A. – you can literally smell the urine on the streets. The dialogue by China Blue and all the seedy characters introduce is quite blunt and salacious. I was reminded of Body Heat (also starring Kathleen Turner). That film was a sexy noir romp and had some strong and suggestive dialogue and sex scenes but retained class. Crimes of Passion turns it on its head is not nearly as good of a film as Body Heat or as classy. It’s also not as good of a film.

Anthony Perkins is totally off the wall playing the manic-panic-disaster that is Reverend Peter Shayne. On one hand he wants to do good by saving the souls of the corrupt but then you really can’t take the guy seriously when he’s watching an illicit peep show inside a dirty strip club. I do like his unhinged performance in the film, though. There’s an amusing bit of trivia – the Reverend’s was originally written as a shoe salesman. It’s not until Perkins was cast that he suggested they change his profession to a Preacher. It was an obvious ode to the sign of the times and pre-AIDs life in those days.

Laughlin is a rather dull and nowhere near as cool as William Hurt but his dynamic with his frigid wife played Annie Potts is strong. It’s that dysfunction that drives him away from his family and back to China Blue, who is literally a different person than Joanna the designer ever was.

I guess you can say that I have mixed feelings about Crimes of Passion. It’s a competently made film;  the stars are likable enough, but it’s a very exaggerated film that does border on parody at times. I did like the homage to Psycho, but I’ll let you discover it for yourself. This Blu-ray release has the theatrical cut and director’s cut. The difference in length is about 5-6 minutes. 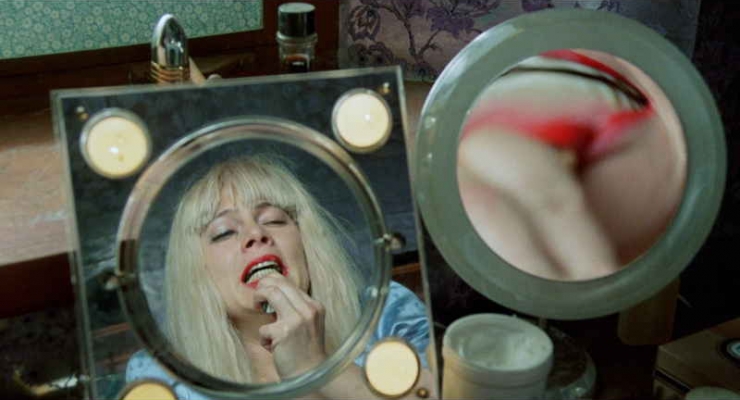 Crimes of Passion is presented in 1080p – restored from original elements in 2K. This is a fantastic transfer if I do say so myself. The mid-’80s color palette truly shines through. Neon, strobe lighting, vinyl lined interiors, etc., all come through without a problem. The film also takes place at night along dark and grungy exteriors. Black levels are nice and free of crush. Contrast and sharpness levels are also top-notch. Specs of dirt here and there compromise this near-reference presentation.

Crimes of Passion is presented in glorious LPCM 1.0 monaural. Dialogue and music take center stage without either of those elements thrashing against each other. The film is an erotic-drama-thriller; so don’t expect explosions (not the traditional kind) or any heavy action beats. The one glaring thing I did notice is that the film seems to be turned down a bit in terms of volume. I actually had to turn up the volume on my receiver to better hear it. Other than that minor quibble the audio track is okay.

A Blu-ray loaded up with TWO cuts of the film is okay with me, as it illustrates the TLC that it was given to it by the folks over at Arrow Video. There are also some brand new interviews conducted especially for this release featuring screenwriter Barry Sandler and composer Rick Wakeman. Audio commentaries, deleted/extended scenes and home movie footage featuring Ken Russell are included, as well.

Crimes of Passion isn’t a home run of a film per se, but the lurid world it lives in is a quite self-indulgent one. The stand out performance would have to be that of Kathleen Turner. The Blu-ray set is excellent and the technical specifications along with the special features are top-notch. If you’re into the seedy underbelly of ’80s neo-noir sexual dramas, with a twist, then Crimes of Passion is right up your alley.