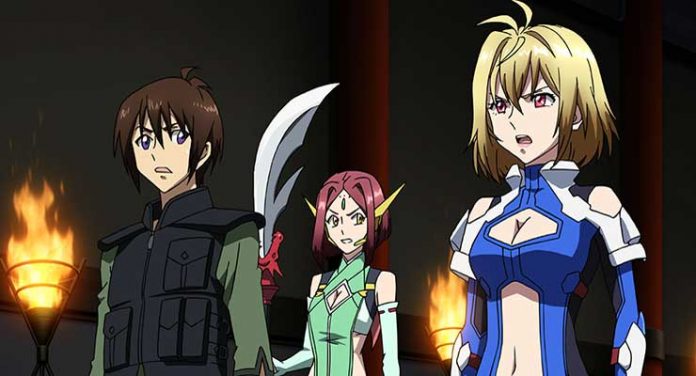 Cross Ange: Rondo of Angel and Dragon is an OVA mecha anime series produced by Sunrise. Well, generally speaking it is a “mecha” series, but truthfully it stretches the genre to incorporate a lot of unexpected elements from other genres. Mainly it relies heavily on fantasy, yuri, ecchi, and what I call “mild” fan service (because while there is a lot of skin, there is no full-on nudity), to tell the story of its female protagonist Angelise Ikaruga Misurugi, First Princess of the Misurugi Empire.

The story is set in a world where humanity has overcome all of its problems like crime, poverty, sickness, and war through the development of a genetic information transfer technology called “Mana”, which seems almost magical. Mana allows people to produce whatever they want when they need it, communicate with one another telepathically and move objects using a sort of telekinesis. This hasn’t come cross-ange-still-1without a price. Those humans born without the ability to use Mana are harshly discriminated against as a threat to the order of society and looked down upon as dangerous, criminal beings that must be removed from society. Princess Angelise was one of the people who subscribed ardently to this racist view until the day of her 16th birthday when she was to be baptized and her brother Julio exposed her before the world and even to herself as a “Norma,” the derogatory term for people who cannot use Mana. Instantly, people turned against the once beloved Princess, who was arrested and carted off to Arzenal where she was forced to serve as a soldier in a secret army of Norma women who fly robotic machines and do battle against mysterious dragon beasts that threaten the world. No one knows the extent to which these Norma actually contribute to stability and prosperity that the Mana users are allowed to enjoy. Now Ange, still bitter at the world she has had torn away from her, must fight to survive and somehow begin to adjust to her fellow Norma soldiers, a rag-tag group girls that either hate her or just want to be her friend.

Cross Ange is a strange series for sure, but getting past the odd mixture of anime archetypes and what seems like some oddly placed Sapphic eroticism, the story is actually a compelling one that has a lot to say about our own stubbornly discriminatory society. Sure “Ange,” as she comes to be called, took a long time to grow in the first collection of 12 episodes, but that is actually not that surprising. This is after all about a girl who was raised as a princess to believe that a certain group of people is just inherently violent and inferior. If we use this as a mirror on ourselves, we can certainly see the parallels clearly.

The second half of the series, which encompasses episodes 13-25, takes a much quicker pace than the first half, and goes off in a what I found to be an unexpected direction. Many of the questions from the top half of the series are in fact answered. For those who may not have seen the series, I won’t give anything away, but you will find out the root of how humans have come to develop their powers of “mana”, and it mostly revolves around the second half’s central antagonist, an enigmatic villain named Embryo who has the ability to manipulate time. In the first half, we were given a hint about the true nature of the dragons Ange and the Norma were forced to fight, and now we find out in depth about the dragons, when, once again, Ange and her Knight/lover Tusk are transported to a strange and devastated alternate reality and they meet a High Priestess who tells them the truth about their world, the dragons, and the conflict between the humans and Norma.

The second half of Cross Ange, while subdued in the social commentary that made the first half a little more interesting than your everyday yuri mecha franchise, delivers the goods with a potent blast of action, stunning twists, and excellent amount of growth for its protagonist. They also don’t drop the ball for those who like their fan service, for, while there still is no full nudity (nipples and genitalia remain fully obscured) there are more than enough erotic moments – if you’re into that sort of things. And as with the first 12 episodes, the animation is breathtaking, maybe even more so here, because as the series climaxes, the action sequences dazzle with blitzes of color and minute detail. 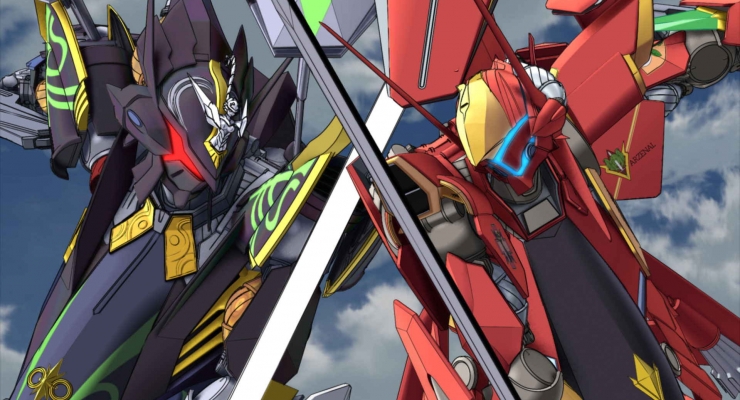 This is a superb transfer of Cross Ange in AVC 1080p from Sentai Filmworks. The colors pop nicely, the detail is crisp, and issues with noise, aliasing, banding, or stairstepping are nonexistent.

Just as in Collection 1, the audio in Collection 2 is top quality. The stereo imaging and dynamic range are both excellent and dialogue is clear and full. Both the original Japanese-language track and the English dub are offered in DTS-HD Master Audio 2.0 Stereo, but the Japanese voice cast are far superior to the English cast.

We get a much better set of extras in Collection 2. The live Q&A session with the ladies from the Japanese voice cast is particular good to see.

Cross Ange: Rondo of Angel and Dragon couldn’t have had a more awesome bottom half. While the series went off in unexpected directions, it was epic, gripping, and fun to watch. Ange is a classic character and the animation is beautiful.