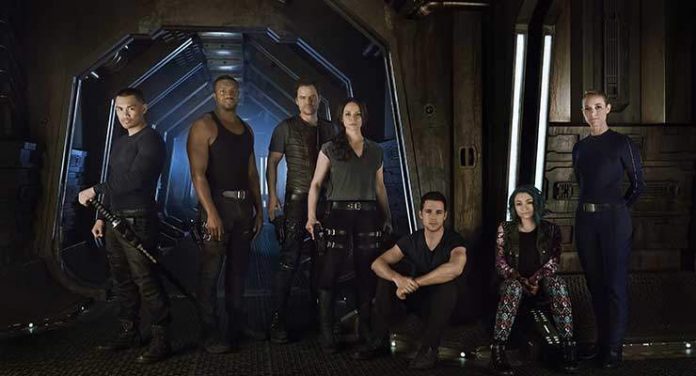 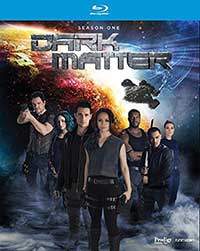 Dark Matter, a Canadian sci-fi import that runs on SyFy is part of the U.S.network’s ongoing mission to rebrand and remake itself into, once again, a home of quality original science fiction content and, most of all, series. They’d lost their way for many years in a landscape of WWE(!!?) coverage, bad B-movies, and “reality” paranormal shows. Well, they are back with a vengeance and fans that lamented the old Sci-Fi Channel days Farscape and Stargate now have a number of quality series to latch onto.

This sci-fi thriller gets started off immediately with a mystery that begs to be solved. Six members of a malfunctioning spaceship called the “Raza” all awake from stasis, their memories wiped, and must get the ship working before they die. Once the ship is back in order, and they subdue the security android (Zoie Palmer, 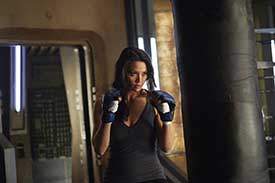 Lost Girl) they awakened from killing them all, they must figure out who each one of them are and try to get their memories back. They have no choice but to work together, even though they don’t trust each other – after all, one of them could have sabotaged the ship. Deciding to name each other by the order in which they awoke from stasis, they become One (March Bendavid), Two (winner of Canadian Idol Melissa O’Neill), who immediately takes charge and becomes the crew’s leader, Three (Anthony Lemke), a kind of vulgarian with seemingly violent tendencies, Four (Aex Mallari, Jr.), a guy with a cool demeanor and master swordsmanship, Five (Jodelle Ferland), a teenager with a mastery for hacking, and Six (Roger Cross), a kind but tough big guy who somehow knows how to fly the ship and its shuttle.

With the android now reprogrammed to help them rather than fight against them, the crew fly out into the unknown, and seek answers, about themselves and their ship as they come across a number of dangers, including enemy galactic armies, bounty hunters out to get them, and unknown dangers aboard their own ship, like faulty sex androids that turn violent.

Though it has an amazing first episode, Dark Matter is a little slow to get off the ground. Give it some time. The first time through, the series lost me. Watching it this second time through, I was thoroughly hooked by the midpoint. Once you start to understand more about the backgrounds of each character (a lot is revealed), you begin to understand and get involved in their ongoing survival and the interplay between the crew members. Surprising chemistry builds. Melissa O’Neil is one sexy, badass space chick too. She really carries this series and, not to give anything away, but the writers really pull a fast one on the viewers late in the season, putting her character in doubt. I almost had a heart attack. That’s how good she and this show is. 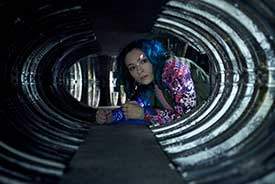 Dark Matter is shot in HD on the Red Epic and comes to Blu-ray in an AVC 1080p encodement from FUNimation. The image looks wonderful, with nuanced shadow details and stable, deep black levels. This is in stark contrast to the way the series looked when I watched it the first time through on my FiOS Quantum DVR. There, it suffered from wavering black levels, compression noise, and softness. This is vastly superior, even given that the bitrate only lingers around the ~26Mbps range.

I was disappointed with the English Dolby TrueHD 5.1 track for this release. The sole audio option, this suffers 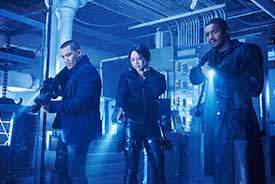 from what I have found a lot of FUNimation soundtracks on Blu-ray suffer from, and that is very squeezed dynamic range and low overall mastering levels. I had to pump the volume up on this track at least 4db above my normal listening levels. The mix itself is only average for a sci-fi series like this. There are some occasional discrete sounds that pan through the room, mostly the big, sweeping noise of the spaceship. The little, low-level atmospherics of the ship that give the show its ambience are hard to make out at times because of the levels and tight dynamics. Dialogue, on the other hand, sounds good. 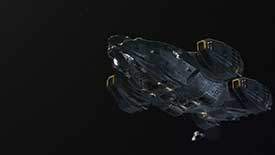 This is a barebones release with not a single extra included.

I’m a convert. This new sci-fi space thriller from Prodigy Pictures and SyFy is a winner. I’m ready for them to bring on Season Two. This Blu-ray release is disappointing in that it has nothing extra and the audio is middling. That said, it is the best way to watch the show.