Just when you thought the zombie genre had thinned out, here we are again with the latest offering called Dead Shack – a film that will pit humans against the undead hordes of the Canadian wilderness.

Summer Lizzie Boys, Colin (Gabrielle LaBell), and their friend Jason (Matthew Nelson-Mahood) all head to the woods with Summer and Colin’s parents for some much-needed rest and relaxation. The patriarch of the family is Roger (Donovan Stinson) and his lovely young wife, stepmother to the teens, is Lisa (Valerie Tian). The parents are booze-hounds and quite hysterical.

Strange disappearances have been plaguing the town, where folks have gone missing without a trace. It’s later found out that a mysterious woman played by Lauren Holly has been seducing, kidnapping, and feeding the disappeared to her family members that just happen to be zombies. Eventually, the family stumbles upon the ghastly findings and they are quickly added to the menu, so to speak.

Dead Shack is light on plot, for example, there is no mentioning about how these people became zombies – there’s no cause to it, they just are. Lauren Holly’s character has no name either – she’s just known as “Neighbor.”

The film has top-notch gore and violence, with a nice comedic edge. It’s sort of like a Canadian version of Shaun of the Dead. The comedic beats don’t wear out their welcome and help lighten the load of circumstance. The parents are hilarious and alcoholic, so the booze infused jokes find their mark just about every time as do the occasional one-liners.

I do wish the film had gone more into detail on the plot points that I mentioned earlier, because it does hollow out the story a bit with those missing elements. I wonder if they got cut out of the finished picture? Dead Shack runs 81-minutes with the credits, so who knows. In any event, this film is a nice little zombie-comedy time waster. 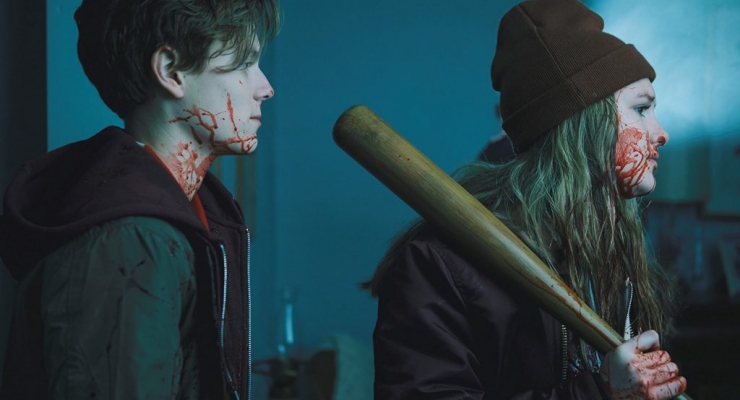 The film is presented in an AVC 1080p codec. Its low-budget roots are not betrayed by the high level of the cinematography. It was definitely shot in digital but the final transfer is pretty spot-on. The color palette, outside of the gore, is quite muted. Contrast and sharpness levels are normal and I did not detect instances of post-processing. Noise, debris, artifacts, etc., were not detected. DNR was not a problem and black levels did not crush.

Dead Shack is presented in DTS-HD MA 5.1. It is a zombie-comedy feature and the lossless audio track amps up the hysterics and gore. Dialogue levels are nice and front centered, surround sound channels carry the terror to the back of the stage. The LFE (subwoofer) channel handles the shotgun blasts with adequate rumble. Magnolia/Magnet Blu-rays have always been known for having top-tier audio and visual specs.

As usual with Magnolia Pictures releases, the supplemental special features are non-existent. The behind-the-scenes featurette runs about 20-minutes. There’s a Dead Shack trailer included, as well. Both are in HD.

This zombie film is harmless fun and has its share of laughs and awesome gore. I had a good time with the picture but that’s just me. The audio and video specs are terrific but the special features outside of the making-of featurette is a bummer. Maybe there was a licensing issue with the original proof-of-concept trailer and that’s why it could not be included. Also, the original poster was way better than the generic artwork used for this Blu-ray. That aside, this one is recommended!

Dead Shack is out on Blu-ray Combo Pack and Blu-ray August 7, 2018 from Magnolia Home Entertainment