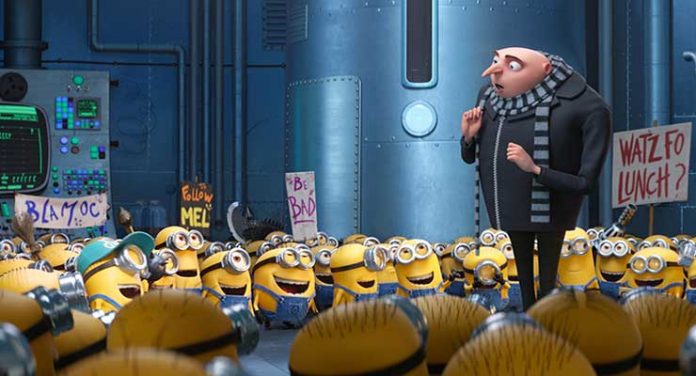 In Despicable Me 3 Steve Carell reprises his role as the reformed criminal mastermind Gru as well as taking on the role of his glamorous, more successful twin brother Dru who has surfaced in a bid to get Gru back into the crime game. The brothers team up for a heist that pits them against the 1980s child star turned wannabe criminal mastermind Balthazar Bratt (voiced by Trey Parker), who’s also still stuck in the decade that once made home a household name with his penchant for leg warmers and Top 40 hits like “Smooth Criminal” and “Take My Breath Away.” Meanwhile the Minions, still wanting Gru to get back into world domination go on strike.

It’s almost a cliché at this point to say that these 3D animated films from the likes of Illumination and other studios such as Pixar and DreamWorks look fantastic. Despicable Me 3 is a gorgeously animated film that take full advantage of the technology of the day, but we’ve well beyond the era when simply making a 3D animated film that looks gorgeous is enough. In fact, I don’t think there really was time when that was enough. During Pixar’s heyday, when they spawned this craze and practically invented the genre all by themselves, they were putting out beautiful looking films that also had powerful stories to tell. This film is not that.

Despicable Me 3 is a dull film that relies solely on the talents of star Carell and the go-to gags of this franchise’s past successes to skate by on a razor-thin plot. And that is pretty disheartening given the fecund soil to plough in this material – a long-lost brother, a criminal mastermind with a family trying to go straight, and a former child star who chose the wrong path in life after being rejected by fans once hitting puberty. There are so many parallels to real life that could have been turned into a heartfelt allegory, but instead directors Kyle Balda and Pierre Coffin and writers Cinco Paul and Ken Daurio play to the lowest common denominator, opting for sight gags, funny noises, and action. The most heartfelt moment comes when young Agnes (voiced by Nev Scharrel) holds a yard sale and sells off her beloved stuffed unicorn for “two whole dollars” to help out Gru, because he doesn’t have a job and needs the money. Fleeting moments like those could have been milked for a deeper narrative, but alas, they were not.

The cast, mainly Steve Carell, do an okay job of things, but Kristen Wiig’s talents are tragically underused and the Minions are, well, the Minions. Everybody seems to love these little yellow troublemakers 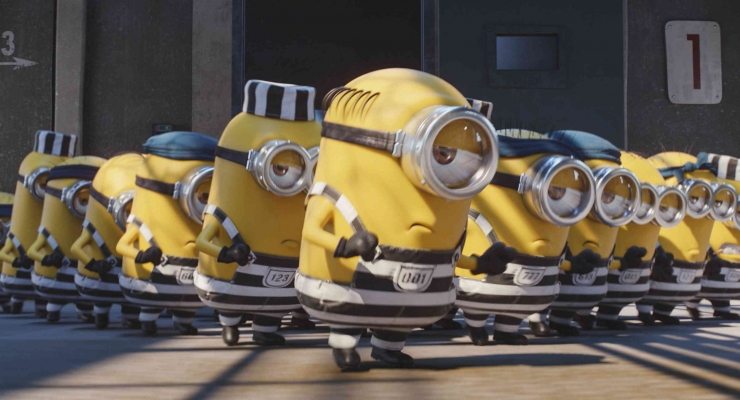 The digitally animated Despicable Me 3 arrives on 4K Ultra HD Blu-ray in a HEVC 2160p (4K) encodement with Dolby Vision framed at 2.40:1. The Dolby Vision really brings this film to life. The palette looks much more candy colored, highlights pop beautifully. Detail looks about the same on the 4K disc as it does on the Blu-ray, but colors on the Blu-ray are less saturated and contrast not as wide, but it offers a satisfying image as well.

Despicable Me 3 comes with an immersive DTS:X audio mix on both the 4K Ultra HD and included Blu-ray discs. The balance is excellent on this one although the mastering levels have been scaled back, so the mix doesn’t pack an “action film” sort of wallop, but for this sort of family fun animation, it really works. The additional height channels add a lot of depth and the lower frequencies and mid range have good punch.

The set is stacked with special features including the excellent short The Secret Life of Kyle, about a not so great looking dog who longs to woo the poodle of his dreams.

Despicable Me 3 is an energetic film that some kids may love, but parents and older kids may find their thoughts wandering. It lacks originality and any kind of coherent storyline. It looks amazing as expected and the 4K Ultra HD Blu-ray with DTS:X is a gorgeous release packed with special features.