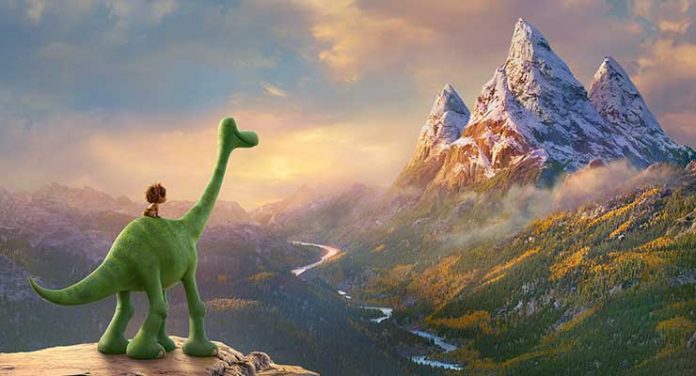 After the excellent Inside Out directed by Pete Docter that was a surprisingly intricate and complex psychological and often surreal journey through one’s mind from childhood through adolescence, Disney-Pixar returns with the straightforward The Good Dinosaur. It’s not that The Good Dinosaur is necessarily bad film, it’s just that, ironically, for an adventure film, it isn’t that adventurous, and that is made more obvious coming directly after Inside Out. While the story is so open for avenues of exploration – the asteroid that hit the Earth 65 million years ago and wiped out the dinosaurs instead misses the planet entirely and the dinosaurs are left to thrive and evolve – the writers and first time feature director Peter Sohn don’t do much with the opportunity. 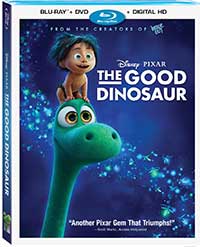 After a brief prologue in which we see the asteroid miss the Earth, we are introduced to a family of dinosaurs, herbivores who look suspiciously like green brontosauruses. The Poppa (Jeffrey Wright) and Momma (Frances McDormand) welcome their three hatchlings, and among them is Arlo (Raymond Ochoa), the tiniest of them hatched from the largest egg. Arlo is a fearful little dinosaur who is the runt of the three siblings and is afraid of his own shadow.

But let’s back up a bit. This family of dinosaurs are farmers. It’s millions of years after the asteroid missed the planet and apparently the dinosaurs have evolved to the point where they have discovered agriculture. They can also talk, you know, English. The problem is, they are still just dinosaurs. No upright walking, no opposable thumbs, no fur, nothing. In fact, they haven’t really evolved at all, they’ve just managed to learn how to farm and speak (and some are herding cattle as we find out later). But back to Arlo…

Arlo is so fearful that Poppa has to work with him to try to get him to work through his fear. He assigns him the task of guarding the family food stockpile which is being plundered by a critter. Arlo is meant to catch the critter in the trap Poppa set, and then pummel him with a club. But when the critter turns up in the makeshift net, Arlo is of course too frightened to kill him, and he sets the critter, which happens to be a small human boy, free. Angered, Poppa drags Arlo out into the night determined to get him to work through his fear and the two get caught in a terrible storm, which leads to tragedy.

After this, Arlo, who sees the “critter” again runs off after him and gets caught in the strong current of a river and drifts far away from his home. Now Arlo must rely on the critter, whom he names Spot, to help him survive the strange and scary world he has found himself in.

The Good Dinosaur plays it very, very safe. It is a straightforward adventure about a young “boy” if you will overcoming his fears, a coming of age story told through the eyes of a friendly dinosaur and a story of finding friends in unlikely places. It is, sadly, all too predictable for the older members of the audience and at times too scary for the younger members of the audience guaranteed to be in attendance. There are moments where terrifying creatures threaten hero’s lives, for real, with very sharp, menacing teeth. Arlo and Spot face certain death in rivers and storms and are almost trampled to death. An adorable fury critter’s life is saved only to be swallowed whole. Not exactly what you expect your little kids to want to watch. And when you add all of this together with the fact that they started with a very interesting premise about what happens if the dinosaurs never get wiped out by the big asteroid and end up with nothing more than big talking dinosaurs, The Good Dinosaurs feels very unoriginal.

Disney only sent us the 2D version of this movie on Blu-ray for review. That said, The Good Dinosaur looks typically gorgeous in this AVC 1080p transfer. It is clean and crisp with vibrant color reproduction and no issues with aliasing, color banding or video noise.

Disney provides The Good Dinosaur with a lossless English DTS-HD Master Audio 7.1 mix and a high-bitrate lossy English DTS-HD Master Audio 5.1 High Resolution mix as well as an English Audio Description track and French and Spanish Dolby Digital 5.1 dubs. The lossless 7.1 mix is fantastic. Not excessively aggressive, but well balanced with lots of solid sound effects in the surround channels, good extension in the low end, a relaxed high end, punchy mid-range, excellent atmospherics, and wide dynamics. The dialogue is full and clear while sounding natural. A couple of scenes involving rainstorms and overflowing rivers provide plenty of opportunity to really show off your sound system.

Disney gives us a disc packed with extras. The best, as always with Disney animated releases, is the animated short. Here, we get Sanjay’s Super Team, which shows how a little boy obsessed with superheroes is finally able to bond with his dad. More common supplements include some behind-the-scenes featurettes and deleted scenes with commentary from Peter Sohn.

The Good Dinosaur is a let down coming after Inside Out, and while it is a pleasant enough adventure film for older kids and some adults who don’t mind derivative coming of age stories, it is one of the weaker efforts from Disney-Pixar. The animation, however, is above reproach; it is practically jaw dropping in some scenes, even if the dinosaurs, including Arlo, look a bit too cutesy.