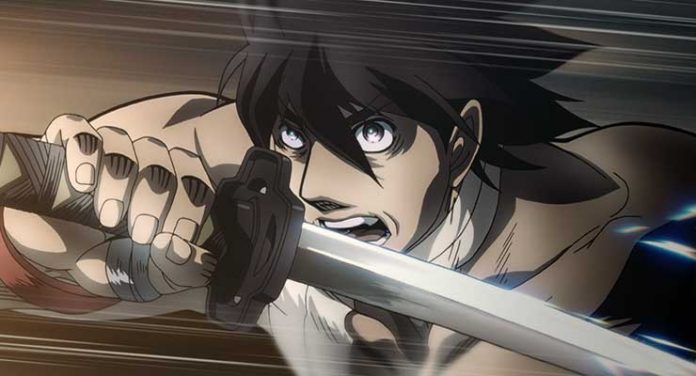 Drifters is based on the fantasy alternate history Japanese manga written and illustrated by Hirano Kouta. The story revolves around the titular “Drifters” who are important historical figures taken off the battle field at the point of their deaths by mysterious figures and sent into a parallel world that resembles an RPG (role playing game) to do battle.

The Drifters include Shimazu Toyohisa, the leader and a historical figure from Japan who died in 1600 during the Battle of Sekigahara; Oda Nobunaga, another historical figure from Japan, a famous warlord who conquered most of the country during the warring states or Sengoku period who is credited with being the first ruler to unite the country; Nasu Yoichi, a bishonen, and youngest of the group of drifters, this famous Japanese historical figure lived hundreds of years before Nobunaga and served Minamoto no Yoshitsune during the Genpei War. Among the non-Japanese Drifters are Butch Cassidy, the infamous American leader of the Wild Bunch gang, who was transported to this world from Bolivia along with The Sundance Kid, his partner in The Wild Bunch. Hannibal Barca, the brilliant 1st century BC Carthaginian general and his rival during the Second Punic War, Scipio Africanus are also brought to this stranger world.

The Drifters must do battle against another group of “rescued” people from history, drawn from the battlefields by an opposing force and sent into this parallel world. But these are different in a particular way – they hate humanity with a fever and have gained an ability to use superhuman forces like magic. They are called “Ends.” Amongst the Ends are historical figures such as Hijikata Toshizō, a Shinsengumi (special forces) vice-commander who died fighting for Bakufu Tokugawa during the Boshin War. His ability is to be able to generate palpable images of the Shinsengumi against his opponents and tear them to shreds; Jeanne d’Arc, the famous figure from the Hundred Years War who was burned at the stake for witchcraft and heresy, which drove her insane, her hatred for the world has given her the ability to control fire which she want to use to burn down the world. Anastasia Nikolaevna Romanova, youngest daughter of the last Russian tsar, Nicholas II is one the Ends as well, the Bolsheviks shot her and her family to death during the Russian revolution; she can create powerful blizzards with her mind. Her family’s infamous mystic adviser Grigori Rasputin is also one of the Ends and his power the ability to use magic to possess others using talismans. A mysterious figure named the Black King leads the Ends, but it is not known who or what he actually is. He has the ability to heal and multiply life forms like food or wood.

The battle between the two forces rages, for some unknown reason, as the Drifters – the force for perhaps good, comes to the defense of Elven creatures living in this unknown world who have apparently been subjugated by the Ends and the Orte Empire, an empire established by Adolph Hitler when he lived in this strange world and organized it to follow his beliefs, including suppressing the demihuman races such as elves and dwarves. With the help of the Octobrists, a group of magicians native to the realm whose, sole purpose is to gather the Drifters to fight the Ends, the Drifters after gaining possession Orte, carry out their war against the Ends with a newly inspired Elven race behind them, he charismatic Shimazu Toyohisa spurring them on to take up arms and help to free themselves.

This anime series is from the same team that brought us Hellsing, so this series does share a lot of the same characteristics visually and otherwise. There’s lots of visceral, gory action and generally a dark overtone to the story arc, but then are many comedic, whimsical moments inserted to break the tension. Visually, the artwork and character deigns are stunning from the angular and detailed costumes to the grand world everyone inhabits.

While these isekai (parallel world or alternate reality) anime are many, such as Nobunaga the Fool, as an example, the grandiosity and inventiveness of this series takes it to another level, combing an alternate reality with the immediacy and addictive quality of an RPG.