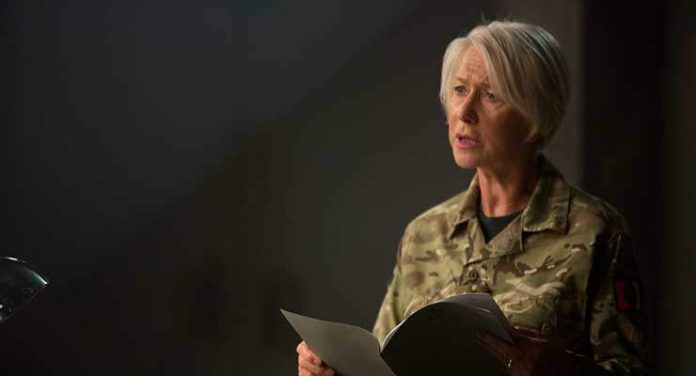 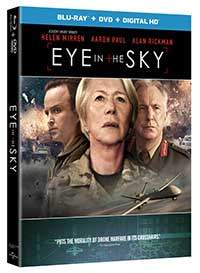 South African actor and director Gavin Hood is best known for directing Ender’s Game (2013) and X-Men Origins: Wolverine (2009), but his most critically acclaimed film is 2005’s Tsosti about one violent week in the life of a young Johannesburg gang leader. With Eye in the Sky, Hood returns to an African theme in a roundabout way, directing a story from a Guy Hibbert screenplay about the morality of today’s drone warfare with the backdrop being Nairobi, Kenya and the war on terror.

British Colonel Katherine Powell (Helen Mirren) commands an operation to capture terrorists in Kenya. When she has three of them in her sights – including one British and one American citizen — gathered in a house in Nairobi readying suicide vests to undertake a terror attack, she arranges with her allied counterparts in the United States to undertake a drone strike on the house. The situation becomes complicated, however, when the American drone pilot Steve Watts (Aaron Paul) spots 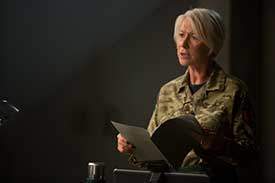 9-year-old Alia (Aisha Takow) selling bread near the strike zone and he refuses to go forward with the attack until confirmation from higher up the chain is granted and a new threat assessment to Alia’s life is undertaken. Powell and her British and American counterparts in the various government and military sections are then forced to debate the legal, ethical, and moral ramifications of striking the target or not.

Eye in the Sky is an interesting film in many ways. Hood and Hibbert at least have the guts to bring the discussion of the ethics and legality of the ongoing drone warfare into the mainstream in a film that is populated by a number of big-name actors. The late Alan Rickman and Ian Glen are also among the castmembers. The back and forth debate between the various government and military officials and what is the ultimate outcome also, in a way, questions whether it is the drone strikes themselves and the collateral damage to innocent people like young Alia that could be partly responsible for driving some people right into the arms of the radicals.

While Hood’s film is a little over-the-top with its pontificating, he does manage to take what is essentially a film driven strictly by red tape and negotiating and make it thrilling and suspenseful. It doesn’t become boring and we’re always on edge wondering what will happen, what the decision will be, and, of course, what will happen to little Alia. Mirren’s acting is partly responsible for helping to drive this as well, as her performance is remarkably duplicitous and cold-blooded. 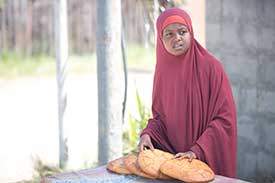 Eye in the Sky was shot in 5K resolution on the Red Epic camera with Panavision E-, G-Series, ATZ and AWZ2 lenses, but used a 2K digital intermediate (DI). That said, this Blu-ray release from Universal, in and AVC 1080p encodement, looks excellent. The image is clean, free from digital anomalies like banding and posterization, and it has natural color reproduction and strong contrast. It could look just a bit more organic – some scenes, particularly the indoor scenes of the military officials – look a little too sleek. Otherwise, there are no complaints.

Universal gives this disc an English DTS-HD Master Audio 5.1 mix as the only option. English SDH subtitles are 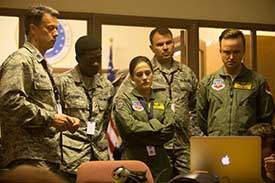 also included. The sound is about as good as the picture, mostly subtle, but this works for the sort of film this is. It’s anchored by lots of dialogue between the characters, and we do get some atmospherics in the surrounds that liven this up. The scenes in Nairobi open up the soundstage more surrounding us in the din of open markets, the shouting of armed gunmen, rumbling engines, and, of course, the bone-chilling sound of drones when they are ready to strike. 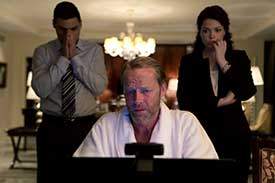 The extras are quite disappointing given the weight of the theme of this film. Two extremely brief promo-style featurettes are all we get on disc.

Eye in the Sky is an interesting film with a few strong performances and taut direction from Gavin Hood. The thematic elements are something worth being debated in the public fora, so kudos to the filmmakers here for being some of the first to tackle it in any meaningful way artistically.

Eye in the Sky (TheaterByte Blu-ray Review)
3.6 / 5 TheaterByte Rating
{{ reviewsOverall }} / 5 User Rating (0 votes)
R (for some violent images and language)Rating Certificate
Entertainment One, RainDog, Bleeker Street, Universal Studios Home EntertainmentStudios & Distributors
Gavin HoodDirector
Guy HibbertWriter
102 Mins.Run Time
$34.98MSRP
28 June 2016Release Date
2.40:1Aspect Ratio
AVC 1080pVideo
English DTS-HD MA 5.1Audio
English SDHSubtitles
The Creative Content
The Video
The Audio
The Supplements
Summary
We're well into the era of drone warfare and Eye in the Sky, while not perfect, tackles the ethics and legality of it in a meaningful and artistic way. The film is anchored by an excellent performance by Helen Mirren and taut direction from Gavin Hood.
What people say... Login to rate
Order by: