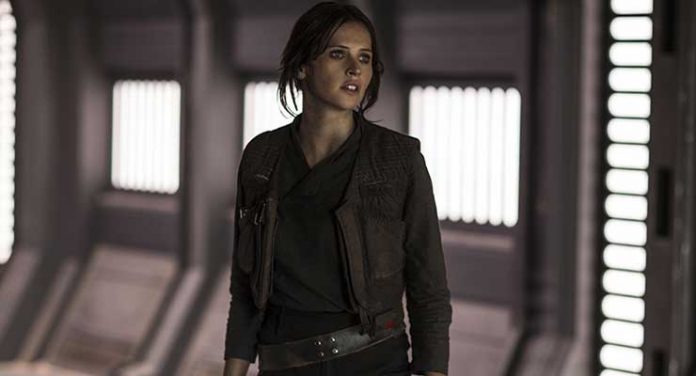 When George Lucas sold Lucasfilm and his Star Wars franchise to Disney, finally handing over the reins of the lucrative sci-fi property, and it was announced there would be more films coming more frequently, this is exactly the sort of this that fans would have hoped for. The Force Awakens got things off to a rollicking start, but although it was a solid effort, it might as well have been a paint-by-numbers remake of A New Hope AKA Star Wars. Rogue One: A Star Wars Story is the first film in the new Disney-led era of the franchise to break in a new direction. While the film holds true to all the elements we have come to love in George Lucas’ space opera saga, it is its own thing.

A ‘side-qual’ wedged between Revenge of the Sith and A New Hope, Rogue One tells the story of a band of Rebel Alliance soldiers – in particular the orphaned Jyn Orso (Felcity Jones), whose mother was killed by the Empire and whose father is a scientist forced into working for the feared Empire, the Rebel captain Cassian Andor (Diego Luna), the blind Jedi monk Chirrut Îmwe (Donnie Yen), and the witty reprogrammed Empire droid K-2SO (voiced by Alan Tudyk) – who come together to steal the secret plans for the dreaded Death Star super weapon that can destroy entire planets. Anyone who has seen Star Wars: A New Hope already knows what comes next in the story.

Rogue One does have the feel of an interim story, and perhaps that is quite unavoidable as it is setting up lots of major plot points that have already come (or are yet to come?), but what makes this film fascinating is that it finally breaks from the longstanding tradition and weight of the Star Wars franchise and puts the focus on characters we have yet to see on the big screen. In fact, Darth Vader makes only a couple of brief appearances in a tertiary role as does Princess Leia in a an odd CGI manifestation of Carrie Fisher (actor Peter Cushing was also risen from the dead in CGI form for Rogue One).

Poor CGI decisions aside, Rogue One is undeniably grittier than Star Wars films usually are. That isn’t to be taken as ‘bloody’ or ‘ultraviolent’, but rather, there’s darkness to the film, sort of like what was burgeoning in The Empire Strikes Back and attempted in The Revenge of the Sith with laughable results, but finally achieved here by director Gareth Edwards (Godzilla, Monsters) with successful results. The look of the film is desaturated at times. The characters scruffy and disheveled like in some post-apocalyptic disaster. One such character, Saw Gerrera (Forest Whitaker) is a good example. The outsider rebel too dangerous for even the Alliance to associate with, his wild hair and oxygen mask that he intermittently sucks from makes him looks like he stepped out of a Mad Max film.

And while all of that is good, Edwards also never loses sight that this is Star Wars after all. No, we don’t get any lightsaber duels, but there are plenty of action-packed space fights and death-defying shootouts. Felicity Jones is arguably one of the most compelling heroes to come along in the Star Wars universe in a while, she plays here part well alongside Diego Luna, and Alan Tudyk adds that touch of comic relief we always expect in a Star Wars film.

For a different take, read our theatrical review of Rogue One: A Star Wars Story by Gerard Iribe. 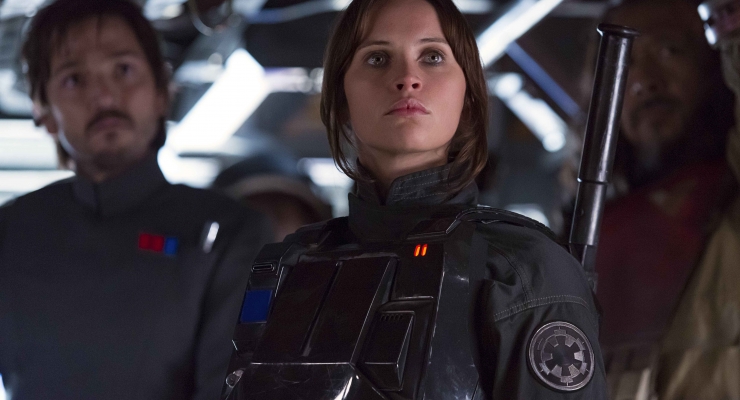 Disney has not yet begun releasing on the Ultra HD Blu-ray format, which is a shame because Rogue One would a prime candidate for a 4K Ultra HD release given it was shot on the Arri Alexa 65 with Panavision APO Panatar and Hawk65 lenses at 6.5K and used a 4K DI (Digital Intermediate). Even so, this Blu-ray, encoded at AVC 1080p and framed at 2.39:1 is about as good as it gets for a contemporary Blu-ray release. The image is crisp and detailed, the blacks are black, which really matters for a Star Wars film, and shadows are nicely nuanced. Perhaps one day we will see this in UHD with HDR, but for now this is a reference disc without question.

Disney still hasn’t taken the plunge into the world of object-oriented audio like Atmos or DTS:X either, but this English DTS-HD Master Audio 7.1 mix is no slouch and, in fact, I find it to better than some of the Atmos/DTS:X mixes I have reviewed. And it is definitely better than the sound mix on The Force Awakens, which I found to be far to pumped up in the low-end – so much so that even the streaming version tends to distort on my very capable Bowers & Wilkins headphones. That said, Rogue One is far more balanced. The low-end is still staggering, but it never gets unwieldy, so when things ‘boom’, they ‘boom’ without overwhelming everything else. As a Star Wars film should be, sounds come from everywhere when the action heats up, so expect to hear lots of laser blasts flying by your ears, but the dialogue always stays clear, and there’s good dynamic range, so when things calm down, we also get quiet ambience and subtlety.

We get an entire bonus Blu-ray dedicated to an in-depth making of documentary on Rogue One plus a four-and-a-half-minute featurette that shows the various connections with the characters in Rogue One to other parts of the Star Wars saga. This is must watch material for Star Wars fans and film buffs alike.

Rogue One: A Star Wars Story is the first of many planned Star Wars spinoffs from Disney and as a sample of things to come it’s a winner. The A New Hope prequel hits all the right notes to take fans on a ride further into the mythology with top-notch visual effects and excellent acting all around.