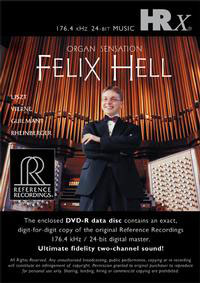 Felix Hell: Organ Sensations is a 176.4kHz/24-bit recording of organ repertory staples that exploits Hell’s deft touch with the massive Schoenstein Organ of the First Plymouth Congregational Church in Lincoln ,Nebraska and shows his mastery of this instrument.

The generous recital offers several masterpieces of the organ literature listed as follows:

With the ambience of a large church and rather distant placement of the pipes, listeners get the perspective of being there and receiving an absolutely live event.

As noted above, microphone placement by the sound engineers, under Keith Johnson’s knowing hand, is deliberately distant to enable the proper balance between the high, middle and lower pipes, thus aiding the clarity of the instrument. The organ is notoriously difficult  to capture on location and this download conveys (with virtually zero distortion in the loud passages) the weight of the chords and space between them.

The liner notes include an encomium of organist Hell by Richard Blacklock and nicely detailed biographic notes on the soloist by Malcolm Wechsler. Susan Halpern fills out the program notes with brief details on each musical selection. Original cover art is also included.

I understand that solo organ recitals might not be every listener’s literal “cup of tea.” Audiophiles from the dawn of time have used such material to demo their systems and impress  their friends and family with the reproduction of the subterranean bass waves that only the best subwoofers could communicate. While Organ Sensations could be used for that purpose, its musical values are strong enough to make it a legitimate source for serious listening as well as reveling in some of the potent sounds that will pour out of your speakers. I have heard some of the best organists of our times, including the legendary E. Power Biggs, and, from the evidence of this recital, Felix Hell will certainly join that musical pantheon some day. Although, I did not have the Red Book CD for comparison, this is such a spectacular recording that those who already own and love it will absolutely need to spring for this download.