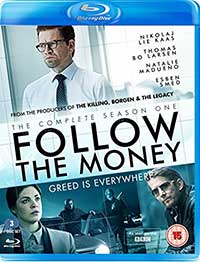 Follow the Money (Bedrag) is the latest Scandinavian crime drama, this one hailing from Denmark, It follows the machinations at a startup renewable energy company, Energreen, led by the CEO Alexander Sødergren (Nikolaj Lie Kaas) of dubious moral fiber, and an ongoing investigation into the company’s fraudulent finances by fraud squad investigator Mads (Thomas Bo Larsen) and his partner Alf (Thomas Hwan). Caught in the middle is the young and ambitious corporate lawyer Claudia Moreno (Natalie Madueño) who manages to work her way into becoming Energreen’s head lawyer, before she realizes the extent of the financial fraud taking place at the company. The series also gives us a subplot involving a ne’er-do-well ex-con mechanic who stumbles into Energreen’s dangerous world when he steals a car with millions in Euros meant as a payoff for one of the company’s fraudulent executives.

While this series is multilayered and looks quite slick (it will look particularly glossy to American viewing audiences not used to seeing to traveling abroad to Europe), Follow the Money falls somewhere in the middle for the genre of crime dramas coming out of Scandinavia in recent years. There are a few too many liberties taken to keep Mads’ investigation going to the very end. For instance, Claudia makes some very strange, often unbelievable choices, and it seems Mads is written too much as the typical gruff cop with domestic problems (he has a sickly wife who’s cheating on him) and who is quick to break the rules to get results. It all feels like something we’ve seen too many times before, not the wholly original sort of material the region has been known for in more recent years.

The HD production of Follow the Money is in keeping with these Scandinavian crime dramas – it has a rather drab, desaturated look, but it works for this sort of dark mystery. That said, there is a lot of inherent banding in the digital source and contrast is middling at best, with black levels looking to be a little on the high side.

There’s a pretty mundane Danish DTS-HD Master Audio 5.1 mix for this series. An opportunity is missed to provide something really atmospheric to draw the viewer into the mystery and sometimes thrilling moments, but instead we get a rather dry, front-heavy mix that only has the occasional sound “escape” off into the surround channels and a score that is forgettable, and narrowly spread across the front.

There’s absolutely nothing extra included with this release.

Follow the Money, or Bedrag, is an interesting, at times superb series, but it is not sustained across all ten episodes and often relies too much on cliché. That said, it is an immersive and stylish time-killer and is well-suited to binge viewing. Unfortunately, this Blu-ray set from Arrow is absolutely barebones with no more than the ten episodes on it.