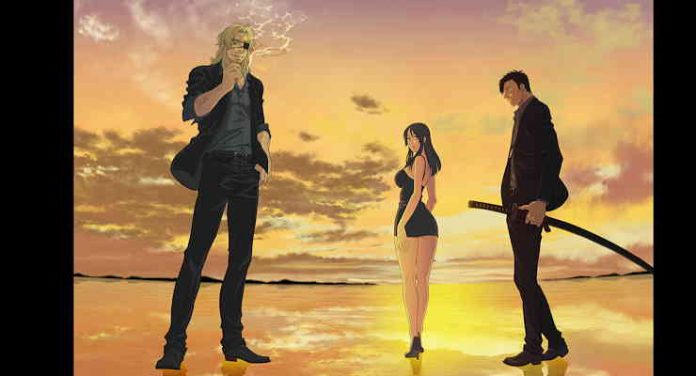 This anime series was taken from the manga series written and illustrated by Kohske. The anime was the last produced by studio Manglobe (Samurai Champloo, The World Only God Knows) before it went bankrupt and out of business in 2015.

Gangsta is an action crime drama with sci-fi elements that revolves around two male protagonists. Set in the fictional city of Ergastulum, a sort of alternate-reality version of a Southern Italian city that is riddled with crime and run by crime syndicates, it follows Worick and Nicolas, two “handymen” who contract their services out to underworld bosses and even the police for all sorts of dangerous dirty work. Alex, a gorgeous former prostitute who becomes intrigued with the two of them and in particular with the deaf Nicolas and his extraordinary killing abilities, later joins the two men. Nicolas is what is known in this world as a “Twilight”, or someone with superhuman abilities gained from the drug Celebrer. They are derogatorily referred to as “Tags” because of the dog tags they wear around their necks to identify them and their level of abilities according to the law.

The series begins as a sort of gritty underworld crime drama and slowly shifts its focus into a mystery involving a group killing these Twilights and a often battles between Twilights of different rankings. Nicolas is ranked at the highest level of A/0. The story becomes a little confusing, to be honest. There’s talk about the “three laws” governing the Twilights, discrimination that they face, and the mystery of the killings. These are all intriguing subjects, but the best part of Gangsta is in the story of Worick, Nicolas and the balance between them that is slightly disrupted between the downtrodden prostitutes Ally. Their violent backstories are revealed in a series of flashbacks and we learn how the two partners met.

There is a lot of visceral violence in Gangsta, but it does often devolve into more over-the-top, unrealistic action sequences with high-flying, superhuman battles of Twilights revved up on Celebrer, the sci-fi super-juice that’s like a steroid on steroids. It all looks great thanks to the superb character designs and detailed artwork, but there is a bit of a dichotomy between the more gritty mafia crime story and the superhuman “Tags” battles and murder mysteries that never really comes together cohesively.

Despite these flaws, Gangsta is a satisfying series with interesting characters that serves as – if not a perfect swan song – a solid farewell for a studio that gave the anime world some of its best series. 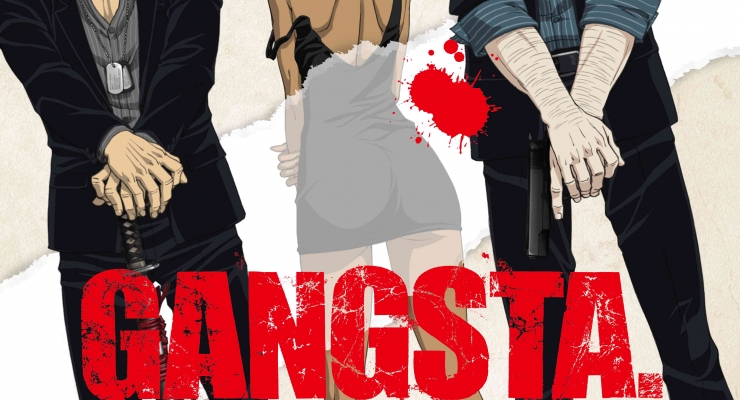 Gangsta looks great in this AVC 1080p encodement framed at 1.78:1 on Blu-ray from Funimation. The line art is crisp, colors and contrast ‘pop’, the occasional added ‘grain’ looks organic and gritty, as intended, and there’s no real issue with banding.

Gangsta gets the original Japanese-language audio mix in Dolby TrueHD 2.0 stereo, which sounds a bit dynamically squeezed and an English dub in Dolby TrueHD 5.1 that is a little more balanced, but also mastered at a fairly low level and lacking in low end. That said, the overall mix is decent and dialogue is clean for both mixes. The English voice cast is actually pretty good, but the issue I take with the dub is the liberties taken with the translation. I understand this is meant to be a gritty series, but the dub drops so many F-bombs that aren’t present in the subtitled version at all that one wonders if they even bothered to translate it or just did their own thing. Cursing or profanity in Japanese is a very nuanced sort of thing that a lot of times depends on inflection or to whom one is speaking. The way it is used in this English dub just doesn’t sit well with me.

The complete series set offers up a fine set of special features including the episode “9.5” and two commentaries. The limited edition adds in some neato swag for the otaku collector’s out there.

A gritty mafia crime series that overcomes its flaws with strong characters and beautiful artwork and character designs, Gangsta helped Manglobe bow out on a high note. The Limited Edition set a gorgeous collection with a solid set of collectibles.