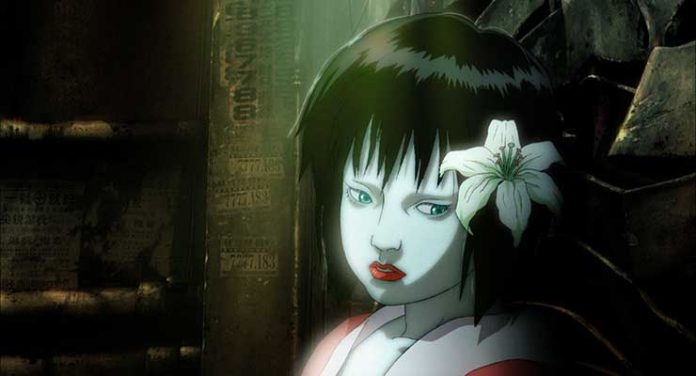 Writer/director Ishii Mamoru loosely based this beautifully animated entry in the GitS universe on a chapter from the original Shirow Masamune manga. The story is set in 2032 after the original film’s (and popular Ghost in the Shell protagonist) Major Kusanagi has uploaded her consciousness to the network. Batou, a completely cybernetic operative for Japan’s Public Security Section 9 and his partner Togusa, an operative with few cybernetic upgrades, are tasked with investigating a growing series of deaths caused by malfunctioning “gynoids” or cybernetic sex dolls. They are believed to have been hacked and had illegal “ghosts” or human souls implanted in them. The investigation will lead them to the illegal sex doll-manufacturing corporation LOCUS SOLUS, in one of the film’s most beautifully animated and mind-mending sequences. Although Batou is the focus of Innocence, Kusanagi looms largely over this film both in spirit (no pun intended) and in actuality, as will eventually become clear in the film’s final act.

The further into the investigation Batou and Togusa get, the more they become tangled in a world where they must ponder the meaning of life, love, and reality, as is evidenced most when they confront LOCUS SOLUS and Togusa begins to lose a sense of where his memories end and reality begins. This is an ongoing theme throughout Innocence even for Batou who seems to long for the companionship of his old partner Kusanagi even as he senses her presence may be there at every moment, somewhere on the web as a “guardian angel” guiding him through his investigation.

One complaint with Innocence is that Ishii, who incorporated heavy doses of philosophy, allusions, and quotations in his screenplay, went a bit too heavy-handed philosophy making the story a little hard to follow. The film can be a little difficult, but is a thoughtful film that is incredibly intelligent and rewarding for the effort.

Where hardly anyone can file a complaint with Innocence is in the beautiful digital animation. It picks up from the cutting-edge work of the 1995 film that combined the hand drawn techniques with 3DGI and pushes that even further, delivering eye-catching worlds that, once again, draw from a number of inspirations in art and philosophy to build a futuristic cyberpunk world worthy of William Gibson or Philip K. Dick.

Ghost in the Shell 2: Innocence is one of the few animated films officially selected to screen in competition at the Cannes Film Festival where it competed in 2004. 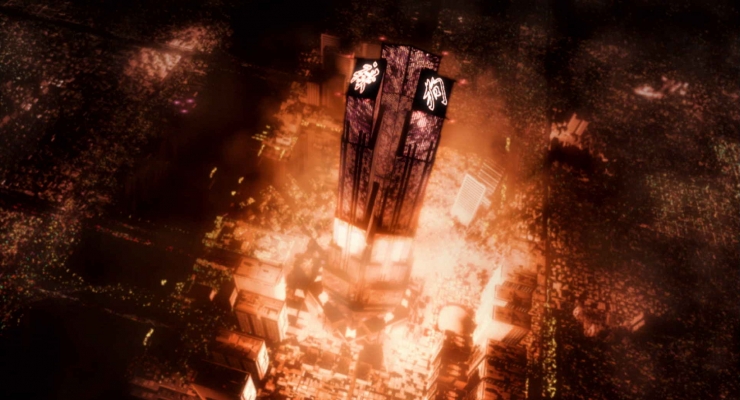 While I still give my older Japanese import of Innocence the edge in video quality, this new issue from Funimation is very pleasing. Colors ‘pop’ nicely and it has an organic appearance. There is a tinge of softness overall, but not enough that it looks smooth or that we lose the detail in line art and the exceptional 3D backgrounds. The video is presented in 1.85:1 AVC 1080p on Blu-ray.

Innocence always had one of the best sound mixes going. In theaters it ran with DTS-ES and Dolby Digital EX mixes, which was cutting-edge in 2004. On this Blu-ray release, it gets a Japanese Dolby TrueHD 5.1 mix and an English dub also in Dolby TrueHD 5.1. The 5.1 mix is aggressive, but well-balanced. Foley effects come from everywhere and dialogue is often panned hard left and hard right to follow action across the screen. This is one film that would be prime material for a remix to one of the new object-oriented sound formats such as Dolby Atmos or DTS:X. In the English dub, dialogue sounds more upfront in the mix and a little less restrained. There is also a heavier hand applied on reverberation effects that I found a bit distracting at times.

This set is disappointingly thin on extras, but we do thankfully get an audio commentary from the original Japanese director and animation director, plus an archival making of that has interviews with director Ishii as well. They are both very insightful.

Ghost in the Shell 2: Innocence is probably one of the few feature film “sequels” in anime that can stand toe-to-toe with the original and come away unscathed. Even despite the relatively tertiary role the popular Kusanagi plays in this, the thoughtful screenplay and unimpeachable animation and sound design mark this as a true classic in its own right. The Blu-ray Combo Pack from Funimation is a bit thin on extras, but is a solid release nonetheless.