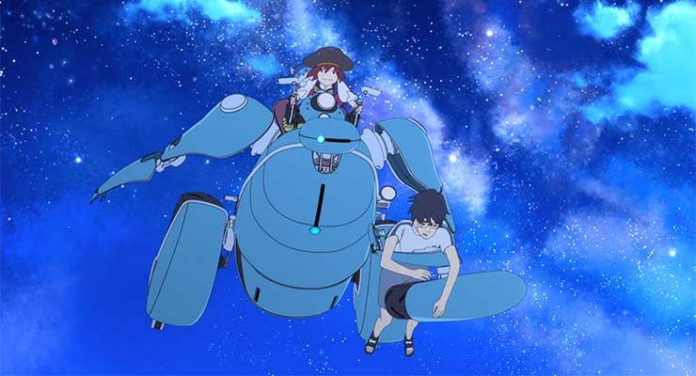 Napping Princess is the latest anime film from writer/director Kamiyama Kenji (Ghost in the Shell: Stand Alone Complex, Eden of the East). Set in the near future of 2020, just before the opening ceremony of the Tokyo Olympics, the film is a sci-fi/fantasy that mixes multiple genres and timelines. Focusing on the musings of female protagonist Morikawa Kokone who should be studying for her exams.

When Konokone falls asleep, she drifts into a steampunk dream world called Heartland where the main industry is auto manufacturing and she is a princess with magic powers who can endow sentience upon mechanical things. Meanwhile, Konone’s dreams interweave with the real world where her father is being pursued by a mysterious man who wants a tablet once belonging to a powerful corporation that is in his possession.

Napping Princess is a story with a lot of different elements. On the surface it is a fantasy adventure film with the typical strong-willed female teenager at its center, but there is much more beyond that. There is the story of a girl coping with the loss of her mother – Koyone’s mom is ultimately the one, we find out, who stole the much sought-after tablet from the big corporation. In fact, the tablet is more of a MacGuffin that spurs on what is really a coming of age tale about a girl with a vivid imagination and a family that has suffered dysfunction for years. The final act brings much of that into view.

This is all encapsulated in gorgeous artwork and a beautifully crafted character designs, but none of that is enough to overcome what can tend to be a bit of a confusing story. The constant back and forth between Kokone’s dreams and the reality tends to become a bit muddled and Kamiyama has a little difficulty keeping it all straight, which should be his forte coming from the world of Ghost in the Shell and Eden of the East. That said, the quick pace and kinetic energy of the film to help to compensate somewhat for those flaws.

The digital animation for Napping Princess arrives on Blu-ray in an AVC 1080p encodement framed at 1.85:1. The image is beautiful and crisp with lovely, vibrant color and no hints of noise or color banding.

The film is provided on Blu-ray with the original Japanese-language track and an English dub both in DTS-HD Master Audio 5.1. The mix is wonderfully balanced and atmospheric with an abundance of ambience and solid effects well placed in the surround channels, wide stereo imaging and superb dynamic range. Both English and Japanese casts do a bang-up job with the material and the English subs are very good as well.

We get an excellent selection of interviews and featurettes with the cast and crew of Napping Princess that explore the real-world settings of the film, the film’s premiere and more.

Napping Princess is an inventive story handled just a bit clumsily making it a little confusing to follow, but its quick pace, heartfelt story and beautiful animation make it satisfying in the end. The Blu-ray from GKIDS is also gorgeously transferred with equally well-done audio mixes in Japanese and English.

Napping Princess is out now on Blu-ray + DVD Combo Pack from Shout! Factory/GKIDS

4.3 / 5 TheaterByte Rating
{{ reviewsOverall }} / 5 User Rating (0 votes)
Signal.MDAnimation Studio
Warner Bros. | Shout! Factory | GKIDSDistributor
Kamiyama KenjiDirector
Kamiyama KenjiWriter
106 Mins.Run Time
30 Jan. 2018Release Date
1.85:1Aspect Ratio
AVC 1080pVideo
Japanese DTS-HD MA 5.1Audio
English DTS-HD MA 5.1 | French DD 5.1Secondary Audio
English | English SDH | FrenchSubtitles
The Story
The Animation
The Video
The Audio
The Dub
The Supplements
Summary
Ahead of the 2020 Tokyo Olympics opening ceremonies while should should be studying for her entrance exams, Kokone's dreams take her into a strange dream world called Heartland where she is magical sorceress able to endow machines with sentience, but her dreams interweave with her reality uncovering long dormant family secrets. While the film is beautiful with an adventurous plot, it can get a little muddled at times. The heartfelt family story at the center and quick pace keep it afloat.
What people say... Login to rate
Order by: