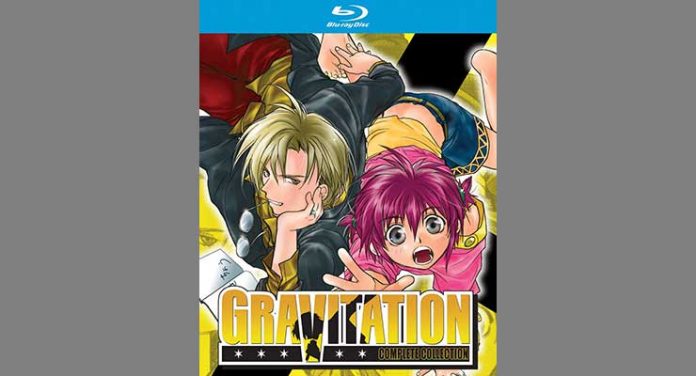 Gravitation is a yaoi (boy’s love) anime series based on the manga series written and illustrated by Murakami Maki. It follows the story of aspiring J-Pop singer Shindo Shuichi and his band as they try to make it to the top, meanwhile, Shuichi, who struggles to write decent lyrics for his band’s songs, has crossed paths with the obnoxiously conceited, famous novelist Yuki Eiri, who labels him a “no talent.” Not satisfied to leave things at that, Shuichi finishes a song he was struggling with and determines to show it to Eiri and prove him wrong, but he begins to think his motivations may be less out of anger and more out of a latent attraction for Eiri. Cue Shuichi’s somewhat misguided and annoying attempts to woo Eiri.

For the most part, Gravitation is a pleasing series that follows the basics for the genre, be it yaoi, yuri, or your basic high school romance anime series. It mixes lots of comedic elements, sight gags, tsundere characters together with many other tropes and, in this case, the musical soundtrack, which is something we seem to get a lot more of these days with J-Pop bands having their own franchises. As there isn’t too much of a strong arc to the story or too many surprises, this could almost be characterized as a romance slice-of-life, as most of these types of series can be. The two main characters are a great mix, however, both terribly annoying, yet stirring up the best kind of chemistry together. Add in the era’s sort of moe character designs and a good amount of detail in the artwork, and we have an enjoyable genre series that manages to hold up twenty years on.

While both the original series and the OVA come in a 1.33:1 AVC 1080p transfer, the picture quality is only a subtle upgrade over DVD for the series, since this was, if I recall correctly, originally created in standard definition. That said, it’s a good transfer of the series, but the OVA does not look very good at all, showing a lot of stairstepping and motion artifacts.

The original Japanese-language audio mix is included in DTS-HD Master Audio 2.0 stereo and an English dub is also provided in DTS-HD Master Audio 5.1. I actually don’t hate the English dub on this and can watch interchangeably, though both sets are a bit hammy, but that’s the nature of this material. The 5.1 mix is nothing special offering mostly a lot of ambience in the surround channels.

This collection includes the Lyrics of Love OVA on a separate disc. It also comes with the clean openings and closings for the TV series and on the OVA includes Gravitation sneak previews 1 & 2, clean opening, clean version of Episode 1 Alternate Closing, and Nozomi trailers.

This set could have had some more bonus features and better picture quality for the OVA to make it better, but besides that this series holds up, provides some laughs and great animation.

Gravitation: Complete Collection is out on Blu-ray September 6, 2019 from Nozomi Entertainment