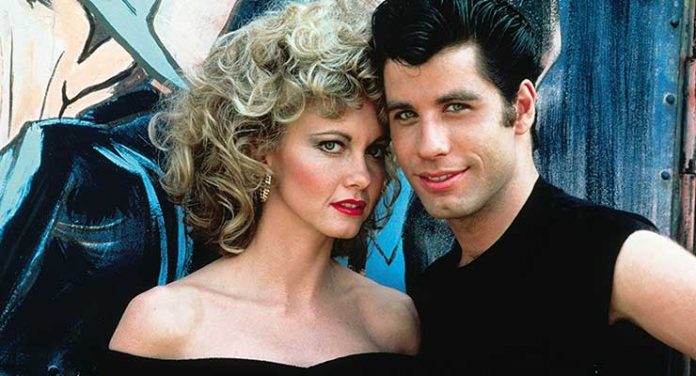 By the time Grease hit theaters in June of 1978, John Travolta was already a bona fide superstar from his roles on television’s Welcome Back, Kotter and 1977’s box office smash Saturday Night Fever, that helped raise the ’70ss disco craze to new heights of awareness and hedonism. When the film adaptation of Jim Jacobs’ and Warren Casey’s stage musical finally hit the big screens, it solidified Travolta’s status as a ’70s icon and sex symbol. It also bolstered the career of Aussie singer Olivia Newton-John, who was already well on her way to becoming a sex symbol in her own right.  When I first saw the film in 1978, I was a wee lad of six, but I certainly recall having a major crush on Ms. Newton-John for a long time after that. The soundtrack to the film even became, for this lifelong music lover, one of my earliest musical memories. I must have worn out the grooves on the soundtrack LP playing back my family’s copy on our old console.

Looking at the film today through the eyes of a more world-worn adult, several times heartbroken, more attuned to the historical references I can’t help but notice the obvious dichotomy of the trite and raunchy that mingle together in this film. With its 1950’s retro look at teenage angst, love and rebellion that is less rose-colored than fish eye, the film is replete with subversive looks at the “innocence” of the 1950s filtered through two decades of cultural upheaval.

The film is immediately evocative of an Elvis Presley movie; some hybrid of Jailhouse Rock and Viva Las Vegas and filled with both classic ’50s songs like “La Bamba,” appearances by Frankie Avalon and original numbers mainly lifted directly from the stage production that hearken back to ’50s rock and roll and doo-wop. One wonders, looking back, how much of an influence the film had on the early ’80’s rockabilly resurgence that would see acts like The Blasters, The Stray Cats and even veterans like Queen (“Crazy Little Thing Called Love”) rocket to the top of the charts with full-on rockabilly songs?

Grease was shot on 35mm Eastman 100T 5247 in the anamorphic Panavision 2.39:1 format and arrives on 4K Ultra HD in an HEVC 2160p (4K) encodement with Dolby Vision HDR. The film has never looked better – the colors looking vibrant and, source looking fairly clean and organic. There are a few moments where some softness and loss of detail rears its head, mostly from the production. The Dolby Vision does add an extra layer of ‘pop’ in the highlights during moments like the “Grease Lightning” number and Danny’s “Sandy” ballad at the drive-in.

The film hits 4K Ultra HD with a Dolby TrueHD 5.1 mix, no immersive Atmos track has been made for this 40th Anniversary Edition, meaning this release gets the same mix that has been available on Blu-ray previously. That doesn’t mean the sound is disappointing – the musical soundtrack is well balanced, dynamic, and clean with a musical low end, punchy mids, and airy high end. The dialogue comes through clear and full.

Much of the special features in this release, housed on the Blu-ray, are port-overs, from previous Blu-ray releases, but there are a couple of new HD featurettes included as well as new alternate ending and opening credits.

A classic musical that helped solidify its stars in the pop culture zeitgeist, this beloved film arrives in a beautiful new 4K Ultra HD edition that really brings out the visual and aural elements. Grease is still the word.

Grease is available on 4K Ultra HD Combo Pack on April 24, 2018 from Paramount