James Gunn returns as writer and director for this installment in the Marvel Cinematic Universe for Guardians of the Galaxy Vol. 2 (currently available on 4K Ultra HD Blu-ray from Disney). In this fast-paced sequel, the Guardians find themselves on the run from a golden-hued, perfect, super powerful alien race known as the Sovereign after a botched heist of battery crystals. While battling the Sovereign and other foes from their past, they cross paths with an all-powerful being called Ego (Kurt Russell) who claims to be Peter Quill’s (Chris Pratt) long-lost father.

The second installment of this oddball Marvel property that has this group of alien misfits flying at light speed around the galaxy to the sounds of ‘70s music battling enemies maintains the comic’s quirky roots. Quill gets a second cassette tape from is mom, “Awesome Mix Tape Vol. 2” that works as the backdrop for the team’s adventures. Green warrior Gamora (Zoe Saldana); Gamora’s sadistic, cybernetically modified sister Nebula (Karen Gillan); genetically engineered raccoon Rocket (voice of Bradley Cooper); shirtless meathead Drax (Dave Bautista); and the cute seedling plant Groot (voice of Vin Diesel) are all back for the adventures. When they come across Ego, Quill, happy to find out about his past, and the rest of the team follows the powerful celestial being back to his personal planet. It’s a world that Ego built himself – an almost psychedelic world with floating bubbles and no one else around save for one companion, the bug-like empathetic bug-like woman named Mantis (Pom Klementieff).

Ego soon reveals his true intentions, however, which as one could have predicted, were never honorable, and the Guardians not only have to battle Ego, but Ayesha (Elizabeth Debicki), the high priestess of the Sovereign who tracks them down and aims to get revenge over their stiffing her on the battery crystals.

While Guardians of the Galaxy Vol. 2 is a fun-fueled action adventure with lots of tongue-in-cheek comedy at its core it is a film about family. It’s about Quill’s relationship with his absentee dad and his dead mother; it’s about the strained sisterly bond between Gamora and Nebula; or the substitute dad that raised Quill, Yondu (Michael Rooker). Ultimately it’s a film about making family out of the unlikely people you find yourself surrounded by, and that is what gives the film its heart, its driving force. 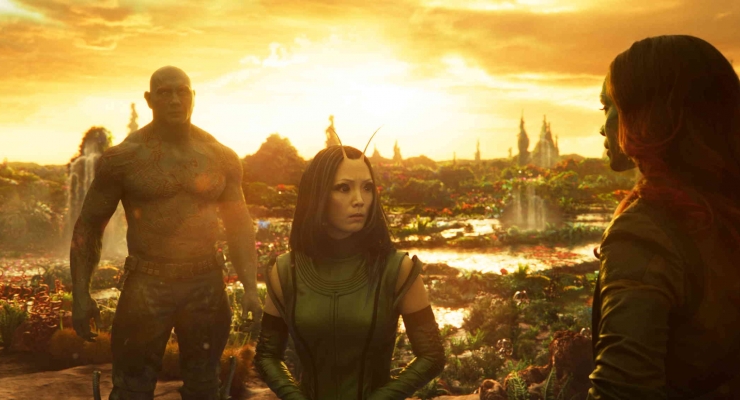 Guardians of the Galaxy Vol. 2 was shot on the Red Weapon Dragon with an 8K Vista Vision sensor. A 2K DI was used in post-processing and the film was also done in Dolby Vision high dynamic range. The 4K Ultra HD Blu-ray is upscaled from the 2K master and brought to disc in an HEVC 2160p (4K) encodement with HDR10 high dynamic range. The image looks nearly flawless on this 4K release. It is free from posterization and compression noise and the color reproduction is dazzling thanks to the wide color gamut. Shadow delineation is awesome. Black crush is nonexistent and the dark scenes show a wide level of detail with inky blacks, yet wide contrasts thanks to the HDR. The highlights pop incredibly in the darker scenes. The final act’s big showdown is an incredible showcase of colors, highlights, and contrast. The one weakness is the non-filmic look in the image. It doesn’t have that “grain” texture we have come to expect and it looks maybe a bit too glossy. On Blu-ray, the 1080p AVC encodement of the film looks as fine as can be. It’s reference level, but the colors and shadows do not standout as much as they do on the 4K Ultra HD disc.

Guardians of the Galaxy Vol. 2 gets a Dolby Atmos mix on 4K Ultra HD that really surrounds you in the action and has extremely extended low end that reverberates through your body, but dynamic range seems just a bit constrained and overall audio levels a tad pulled back. That said, everything is clean and clear with full sounding dialogue and excellent use of the overhead and surround channels.

The supplements for this 4K Ultra HD Blu-ray release aren’t exactly bursting at the seams, but there is a decent just under 40-minute making of featurette that covers everything from the musical soundtrack to the visual effects. Additionally, there’s a music video featuring David Hasselhoff.

Hyperactive action, dizzying visual effects, and a heart of gold – Guardians of the Galaxy Vol. 2 improves on the cheeky first film in the series by making the story about what everyone can relate to, the search for family. The 4K Ultra HD Blu-ray is stunning, to say the least.