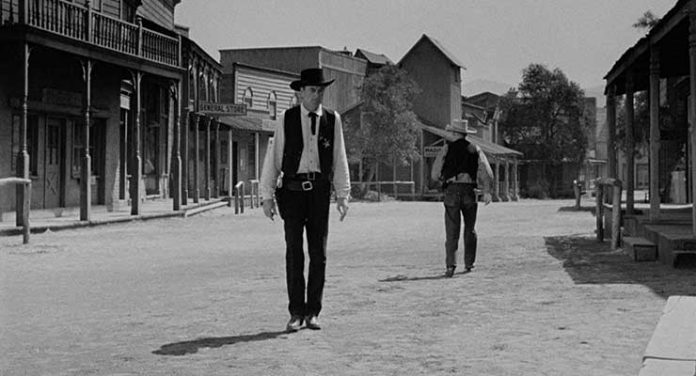 The 1952 western classic High Noon stars Gary Cooper as Hadleyville marshal Will Kane, newlywed to his beautiful Quaker bride Amy, played by a twenty-one-year-old Grace Kelly in only her second film role and twenty-nine-years younger than co-star Cooper.

The film is shot in real time, so its eighty-five-minute runtime ticks down with an intense sense of realism paced in the actual timeframe in which the story takes place that is heightened by the use of tight camera work and the persistent symbol of a clock ticking down. High Noon was caught up in the red scare McCarthyism of the 1950s. Writer Carl Foreman, whose blacklisting was only temporarily spared by rabid anti-communist Gary Cooper, would fall to the blacklist of the House Un-American Activities Committee. John Wayne, who ironically accepted Cooper’s Oscar award in absentia for his role in High Noon, said the film was the most un-American western he’d ever seen, and director Howard Hawks, another right-wing Hollywood anti-communist hated High Noon so much, he felt compelled to “answer” it with his own film, Rio Bravo. Despite all the shocked sentiments from the anti-communists, High Noon has gone on to be one of the most lauded and enduring westerns ever filmed.

Also ironic is the fact that the story’s protagonist, Will Kane, plays out in fiction the story of the isolated and abandoned hero who must resist oppressive forces, a story that directly mirrors that of writer Carl Foreman’s real-life tribulations during the blacklist era. 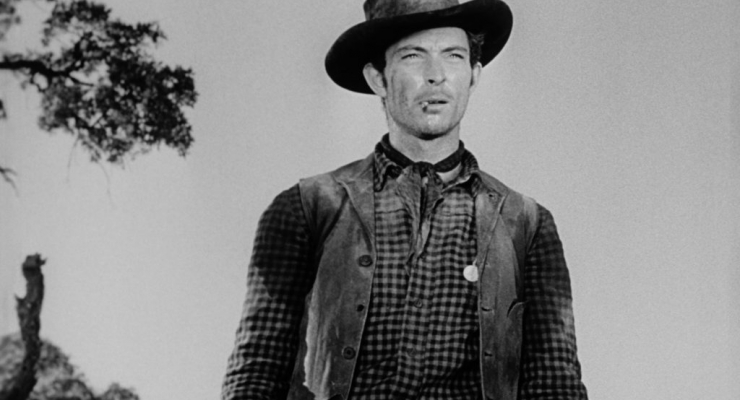 This Masters of Cinema Series Blu-ray release of High Noon is taken from a 4K restoration and provided in a 1.37:1 AVC 1080p encodement. The film was previously released in the U.S. on Blu-ray in a 4K restoration from Olive’s Olive Signature imprint, which I also reviewed. I compared both releases and they seem to be taken from the same master. There’s a scene very early on in the first act where the bad guys are first riding into town down the main street and a group of the town’s men gather outside a storefront – in the very upper right hand corner of the screen there is some very visible roughness like noise or source damage in the sky in the background. That appears in both releases.

That said, just as with the Olive release, this Masters of Cinema release looks gorgeous. It’s clean and mostly crisp apart from a few frames here and there with some softness probably due to duping for visual effects. The black and white cinematography looks gorgeous, the film grain is beautiful and organic, thinly layered and mostly consistent, blacks are inky without crushing. The textures throughout are breathtaking. One can spot every bit of stubble on the faces of Gary Cooper and Lloyd Bridges.

The original monaural audio mix is provided in LPCM 2.0. There isn’t much dynamic range, but dialogue is clear and there’s no clipping and little hiss.

Two excellent audio commentaries, a couple of archival making-ofs, and an archival audio inrterview with Fred Zinnemann are the cherry on top of a superb release.

From its stark black and white cinematography to its steely hero of determined convictions and real-time story arc, High Noon was an innovative film that spanned a few genres, — western, drama, thriller, action, even noir. Eureka has once again delivered a classic in a beautiful package with wonderful image quality in their Masters of Cinema Series with this release.

4.6 / 5 TheaterByte Rating
{{ reviewsOverall }} / 5 User Rating (0 votes)
UK: URating Certificate
Stanley Kramer Productions | Eureka EntertainmentStudios & Distributors
Fred ZinnemannDirector
Carl Foreman (screenplay by) | John W. Cunningham (based on the magazine story by)Writer
85 Mins.Run Time
£27.99MSRP
16 September 2019Release Date
1.37:1Aspect Ratio
AVC 1080pVideo
English LPCM 2.0 MonoAudio
English SDHSubtitles
The Creative Content
The Video
The Audio
The Supplements
Summary
A town marshal decides to stay and fight against a gangster -- a man he sent away to prison years earlier -- arriving in his town on the noon train despite the protestations of his wife and the townsfolk who all abandon him. A red scare era film, High Noon stands as a classic western that has stood the test of time and withstood the sway of the dark politics of its time. This Eureka Entertainment release is packed with bonus features and looks beautiful in a 4K restoration.
What people say... Login to rate
Order by: