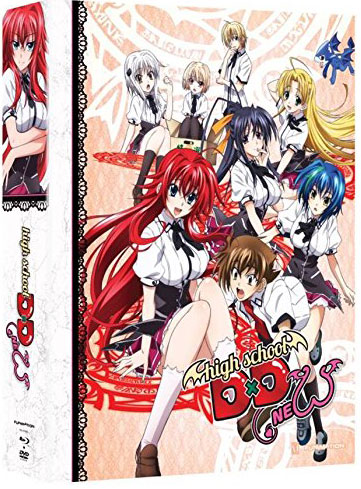 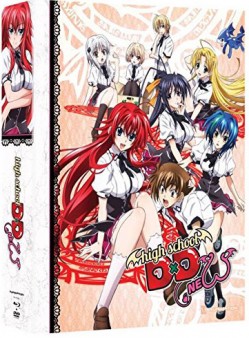 With the characters from this comical, titivating fantasy fan service series now well established, High School DxD get right into the absurdity in its second season, New, opening up on our protagonist Issei’s face plunged right into the well-endowed bosom of his Master and President, Rias Gremory. And from there, you know what you’re in for with the remainder of the season, sort of.

High School DXD New follows the story arc from volumes three and four of the light novels on which it is based, and this season sees Issei, Rias, and company plunged into the midst of a possible restarting of a war between the main factions of the Angels, Devils, and Fallen Angels. Two new members of the church also appear, Xenovia and Irina, at first hostile, but then asking for Rias’ help in defeating the fallen angels seeking to obtain the Excaliburs. Eventually, Xenovia, after learning something shocking, leaves the church and becomes a devil, and another one of Rias’ knights. Issei also encounters his fated nemesis, the White Dragon Emperor, who is endowed with the exact opposite power of his, the ability to half the power of the person he touches.

While all of this seems very serious, High School DxD New never lets you forget that, at its heart, it is a quite silly series. As Issei is in the throes of a dangerous battle, the thing that gets him most fired up is the thought that he might get to grope the breasts of Rias. Or, in one final battle, he reaches new heights of power when he is told that his opponent will make Rias’ breasts smaller. The absurdity is to be commended for lightening the atmosphere and always hitting the right notes.

Of course, the series still looks very appealing to the eyes, to say the least. The character designs are sexy, if that is your sort of thing. The backgrounds are always quite detailed, the outfits, a modern goth blend, suit the theme of the series and show lots of intricate detail, and the faces of each character is easily recognizable. Although, I suspect, in many instances it won’t be the faces that will be focused on here.

High School DXD New gets a good looking transfer to Blu-ray of its HD source. This native HD transfer looks similar to the previous season’s, but also slightly better. While some of that softness is still there, the colors look just a bit richer and some of the video noise is gone, making this a step up. It is supplied in an AVC/MPEG-4 1080p encodement.

The series gets the original Japanese-language track in Dolby TrueHD 2.0 Stereo and an English dub in Dolby TrueHD 5.1. While the Japanese voice cast outshines the English cast at every turn in terms of realism and acting ability, the 5.1 mix is a pleasure to listen to, with lots of atmospherics and some solid effects in the surrounds during the multitude of fight sequences.

Another wildly entertaining ride into the sexy and the inane, High School DXD New presses all the right buttons for a great fan service series.