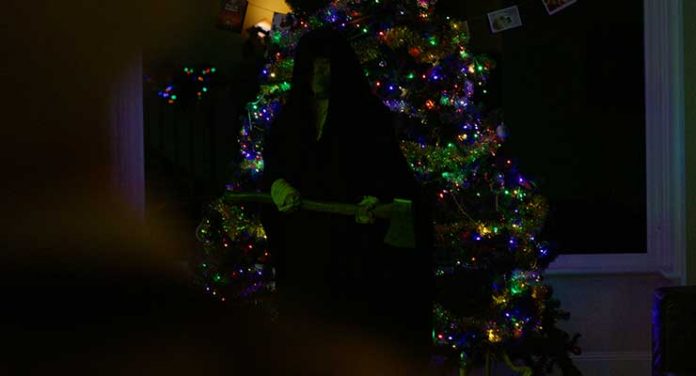 Horror has a long tradition of using the holiday season, Christmas in particular, as a backdrop for some of its most outrageous and offensive films going all the way back to the mayhem of the horror movie classic Black Christmas and films like Silent Night, Deadly Night or My Bloody Valentine. The latest slasher film to join this lineup is Australian writer/director Craig Anderson’s Red Christmas.

The movie is produced by horror stalwart Dee Wallace who also stars as Diane, the matriarch of a dysfunctional family who all come together at her house to celebrate the Christmas holiday before she sells off the family house. Shortly after everyone gathers a deformed stranger in a cloak calling himself Cletus appears at the front door and that’s when the trouble begins. Cletus stirs up a secret from Diane’s past and is looking for vengeance – and vengeance he will have.

This is a film that, from its opening moments of a bombing at an abortion clinic right through to the end will probably offend someone. Craig Anderson has said that “I do accept that in personifying the fetus, turning it into a human, I have made a pro-life statement, which in turn murders nine people.” We find out that Cletus is in fact, Diane’s aborted fetus that survived a bombing years earlier and is back. “Mother, why do you always try to kill your children?” Cletus asks as he goes after Diane with his bloodied axe. Diane replies with the ironic “You son of a bitch!”

Red Christmas is a bloody disgusting and literally colorful ride through holiday torment. Anderson shoots the interior of the isolated outback home lit up in different dimly lit colors of the holiday seasons – vermilion red in the room where Diane’s pregnant daughter Ginny (Janis McGavin) will eventually give birth as Cletus is own his rampage throughout the house, green in another room and so on. Anderson also infuses the film with enough inventive ways to die to keep those who love to take a stab (pun intended) at how the next person is going to die guessing. So, while you’re on the edge of your seat with the quite reasonable amount of suspense garnered by the pacing and camera angles and still pondering the image of that severed penis on the sink (yeah, that actually happens) you’ll be wondering who gets it next, how and where.

On that level of crude offensiveness and blood and gore in the cult horror genre that some fans live for, this horror movie hits all its targets, and scream queen Dee Wallace is a standout member of the cast proving her bona fides.

This is a good-looking film despite its relatively low budget. Red Christmas arrives on Blu-ray in an AVC 1080p encodement framed at 2.35:1. While there is some mild banding and noise that can be seen mostly in a few of the darkest scenes, this one looks crisp with excellent, vibrant colors and strong shadow nuance.

Artsploitation Films gives this horror movie a 5.1 mix in the DVD-era Dolby Digital format for this release. In other words, it’s low budget all around. A Dolby Digital 2.0 stereo mix is also included. The 5.1 mix is average for a horror flick. There is a low level of atmospherics spread through the surround channels and good stereo spacing. There are some oddly placed discrete sound effects in the surrounds such as voices that, due to the long periods of quietness in the surround channels, make them seem very out-of-place and gimmicky. Otherwise, this lossy track, though not as good on clarity as a lossless track, is good, but could have been better on balance.

The director commentary and interview with Dee Wallace are the standouts in these included special features for this cut horror movie. The rest seem like throwaway features.

With its mixture of politics, religion, and gross out slasher horror, Red Christmas will be a fun film for cult horror movie genre fans. The Blu-ray from Artsploitation Films is a fine video transfer with good lossy audio.