I Dream of Jeannie (The Complete Series) (Blu-ray Review) 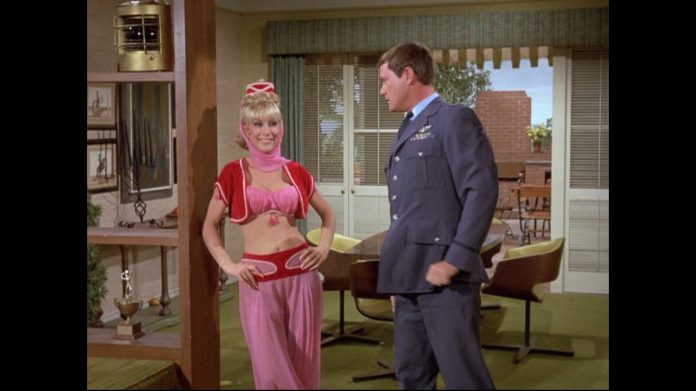 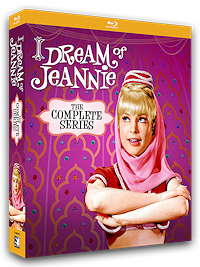 I Dream of Jeannie is the 139-episode romantic comedy/fantasy sitcom that ran on the NBC network from 1965 to 1970. The show, produced by Screen Gem, was a direct response to the production studio’s other successful, similarly themed series for the ABC network, Bewitched.

Barbara Eden stars as the seductive, blonde bombshell, 1,000-year-old genie aptly named Jeannie whose lamp is washed up on a beach where NASA astronaut Major Anthony Nelson (Larry Hagman) crash lands and discovers her. His life is complicated by her arrival as she moves into his home, causes his much-welcomed split with his fiancée, and more than the occasional awkward moments with his superiors that don’t know she exists. Eventually, over the course of five seasons, the two fall in love and marry, with lots of mayhem and popular guest stars of the era in between.

There are plenty of laughs to be had from the pilot straight to the end, mostly clean fun, and lots of what could be called a comedy of errors and misunderstandings in this classic series.

Despite being listed on the packaging as being 1080p, this collection comes with a 1080i AVC encodement that is framed at the original 1.33:1. I reached out to the Mill Creek Entertainment public relationships a couple of times to try to confirm if this was correct or if the transfer was done incorrectly, but at the writing of this review I still have not received a response. The image does not look very good. It looks to my eyes as if these Blu-rays were sourced from an HD broadcast master, thus accounting for the 1080i encodement. One can make out scanlines and some shredding of edges. The film grain is rather coarse as well and detail softens quickly in the backgrounds. From the second season on where the series switches to color, the image doesn’t look as vibrant as one would like it to either.

The monaural audio is supplied in English DTS-HD Master Audio 2.0. It provides clean audio with intelligible dialogue that sounds a few steps above the original over-the-air broadcasts.

I Dream of Jeannie comes with no bonus features.

Mill Creek Entertainment packs this series’ 5 seasons onto 12 Blu-ray Discs. The image doesn’t look anything near reference for an HD Blu-ray release, but it’s great to own as a budget release and still avoids the issues with streaming.

I Dream of Jeannie (The Complete Series) is out on Blu-ray from November 30, 2021 from Mill Creek Entertainment

Load more
I Dream of Jeannie (The Complete Series) (Blu-ray Review)NASA astronaut Major Nelson (Larry Hagman) crash lands on a beach where he finds a genie's bottle and releases thousand-year-old blonde bombshell Jeannie (Barbara Eden) who can grant him anyway wishes he desires -- and upends his life in this 5-season-long sitcom that ran from 1965-1970 on the NBC network.