In the Realm of the Senses [UK Release] Blu-ray Review 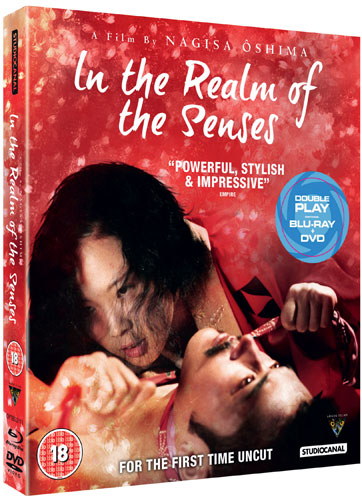 Based on a true story from 1930’s Japan, Nagisa Ôshima’s controversial 1976 film, In the Realm of the Senses, breaks down the barriers between mainstream cinema, eroticism, and pornography. Barred from the Cannes Film Festival and banned in its uncut form for years in the UK, the BBFC (British Board of Film Censors) has finally passed it uncut for distribution in the UK, and that is what arrives here in this Double Play edition from StudioCanal.

A tale of passion, sex and obsession, In the Realm of the Senses is the story of Sada Abe (Eiko Matsuda), a former prostitute who goes to work in an inn to pay off her pimp’s debts. She becomes obsessed with the married innkeeper Kichizo (Tatsuya Fuji) after watching him have sex with his wife. Kichizo subsequently is smitten with her when he spots her at work in his inn and after having sex with her, he becomes equally obsessed with Sada. The two run away together, unable to part from each other for hardly a moment, and as their affair progresses, their sexual antics take a more prurient and violent turn, culminating in Sada threatening to cut off Kichizo’s penis because she can’t bear to be apart from it, and Kichizo begging to be strangled so he can experience the pleasure of erotic asphyxiation.

Needless to say, the explicit sex scenes in In the Realm of the Senses were scandalous at the time, especially in Ôshima’s native Japan, with its strict laws regarding nudity in film. But being one of the first mainstream films to feature actual sex acts, In the Realm of the Senses had to bear the brunt of much malignant and criticisms that perhaps would not be so voracious today. Just trot down to any art house cinema and one is likely to catch a number of films, particularly from Europe, that are doing much the same thing.

While the image looks generally clean on this 1080p/24 AVC/MPEG-4 encodement from StudioCanal, there are more than a few instances of tramlines apparent and some wavering color reproduction as well. The reds, though they tend to “pop” nicely, show a few places where they look just a little faded. There is also some video noise here and there. Other than that, the transfer looks strong and shows a great amount of foreground and background detail with strong, extended shadow delineation and good, but not great, contrast.

Just as on the companion release of Empire of Passion, this has a DTS-HD Master Audio 2.0 mono soundtrack. There’s not much that can be said about a monaural mix other than to point out that is sounds relatively clean and full with what I would guess to be intelligible dialogue, but I’m no expert in Japanese.

This release contains an excellent documentary featurette on the film and director, Once Upon a Time: In the Realm of the Senses, though there is some overlap with the second featurette on the disc as well. Other than that, viewers should also check out the panel discussion for some interesting viewpoints from Japanese film scholars, but the delted scenes really don’t bring anything to the table.

This one is certainly not for younger audiences or anyone with a puritanical streak running through their veins, but if you can get beyond the obvious, In the Realm of the Senses is actually a marvelously put together film. This transfer from StudioCanal is imperfect, but it is nevertheless respectable.