James Schamus is known mostly as the man behind the scenes producing or writing such screen gems as Brokeback Mountain (producer) and The Ice Storm (writer), but for this adaptation of the Philip Roth best-selling novel Schamus both writes the screenplay and steps behind the camera to direct.

Indignation seems to play right into Schamus’ wheelhouse of emotional baggage, coming of age, and cultural clashes. The story is set in the 1950s following a brilliant young Jewish boy from working class Newark, Marcus (Logan Lerman), who gets into an ultra-conservative college in Ohio on a full scholarship where his life and his family’s plans for him to become an attorney are waylaid when he meets and falls in love with the beautiful and troubled Oliva (Sarah Gadon).

What transpires in Indignation is more or less a brief look at 1950s mores, some shockingly familiar slut shaming, and very little having to do with anything really substantive. Schamus seems to have left out all of the really serious bits about the struggle of a young Jewish man thrown into a conservative Protestant university, only briefly touching on this during a contentious conversation Marcus has with his Dean (Tracy Letts, Elvis & Nixon) over moving out of his shared dorm room and the required chapel attendance in order to graduate. The problem is, by the time we get to this conversation and Marcus’ very indignant attitude, we haven’t seen him face any real religious or ethnic discrimination at Winesburg University outside of being placed in a room with two other non-religious students of Jewish descent. He has been mostly angered by girl troubles with a young woman who isn’t even Jewish, and nobody actually bothers them about that. What they do bother them about is that she, Olivia, is what they in their 1950s mores perceive as promiscuous. 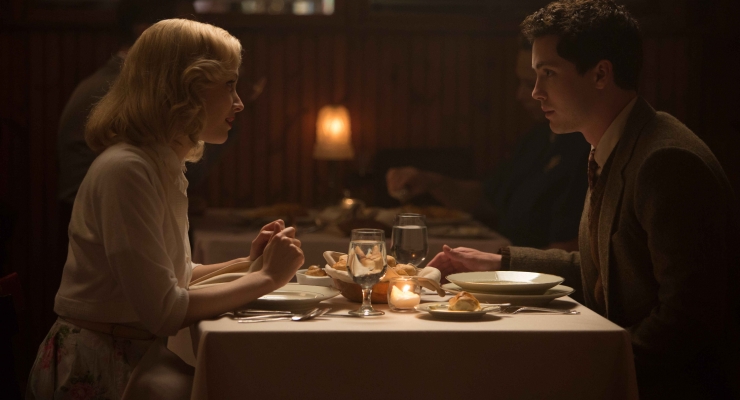 The 1.85:1 framed AVC 1080p encodement of Indignation will not rush to the top of anyone’s reference list anytime soon. The bland color palette and soft details are only part of the issue, but the transfer shows some other problems like color banding in flat backgrounds like the beige and off-white walls of the Winesburg University dorms and offices, or sometimes disintegrates into patchy blobs of posterization in dark backgrounds during nighttime scenes.

There’s nothing much to the English DTS-HD Master Audio 5.1 mix, which is the sole track included on the disc for Indignation. While the score by Jay Wadley is presented beautifully, with natural dynamics and excellently balanced into the mix, the rest of the mix is quite staid and dry without very little going on in the surround channels and even the slightest hint of clipping in dialogue during some of the loudest passages.

The disc comes with very little in the way of extras. Two featurettes are included that briefly cover the film’s production and the adaptation of the Roth novel. Both feel more promotional than informative, but they do include some interviews with the cast and crew.

Indignation looks beautiful and has that period feel, and it desperately wants to be an important film, but somewhere along the line it lost the plot. In the hands of a more capable director, this may have been a much more moving film, but as it stands, it is just an average period film that probably misses the point of this minor semi-autobiographical Philip Roth work.