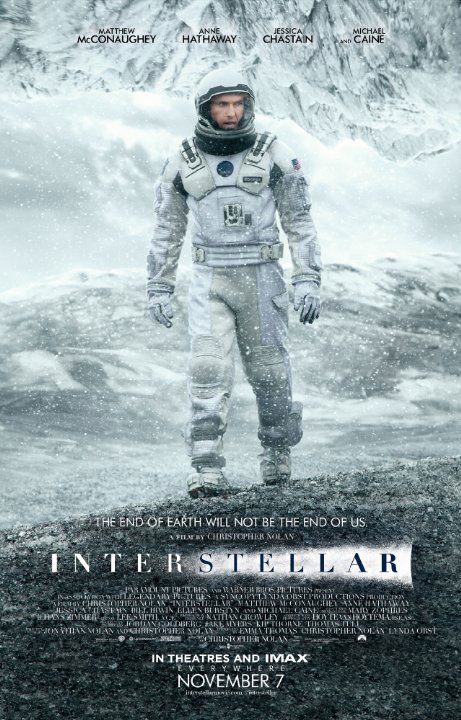 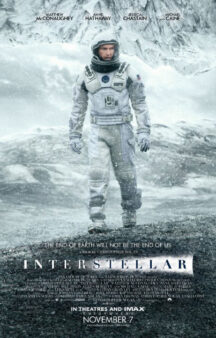 There’s a lot of hype surrounding the new film Interstellar, which opens on Friday November 8th.

It’s directed by Christopher Nolan, the man who brought us the billion-dollar grossing films (each!) The Dark Knight and The Dark Knight Rises. He also brought us 2000’s smart and highly intellectual film Memento and 2010’s highly confusing Inception. Also upping the hype around Interstellar is that it stars recent Academy Award winners Matthew McConaughey and Anne Hathaway, multiple Oscar nominee Jessica Chastain, as well as Oscar winners Michael Caine, Ellen Burnstyn, and in an uncredited/unbilled but pivotal role in the film, Matt Damon. 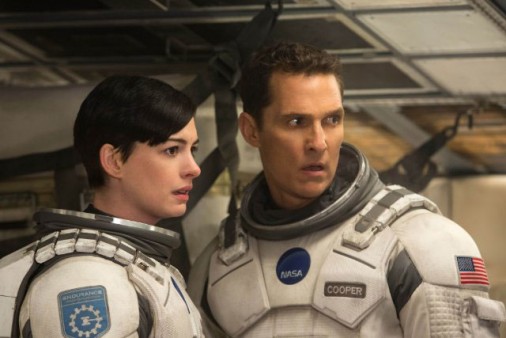 Interstellar is a lot of things, but according to Nolan, it hinges on the provocative question of humanity’s place in the stars. Interstellar means ‘occurring or situated between stars,’ and that’s basically what the movie is all about. It’s also about black holes, distant galaxies, uninhabitable and habitable planets, spaceship travel, and what drives the plot is the relationship a father has with his daughter.

Set in the near future when an agricultural crisis has hit Earth and there is not enough food to eat and the population is slowly dying. The land is very dry and there are massive sandstorms that engulf the planet. With the possibility of the extinction of humans, a dangerous and daring mission takes place to look for planets outside of the universe where humans can move to, survive, and most importantly, reproduce. It’s a mission that goes above and beyond the barriers of time and space, defying not only gravity, but inter-galaxy travel as well. It’s an experimental mission that’s not only very dangerous, but life altering as well.

Cooper (McConaughey) is a former test pilot and engineer who’s now a farmer because that is what is needed in this decaying, dry new world. The only crop that is left on earth is corn, so this is what he grows at his vast farm, with the help of his father-in-law Donald (John Lithgow) and his two children – teenage son Tom (Timothee Chalamet) and daughter Murph (Mackenzie Foy). Cooper hears of some sort of experimental space project going on in his area, so he drives off attempting to find it, at the same time finding Murph in the back of the car when she was told to stay home. She’s as much of a space geek as her father. 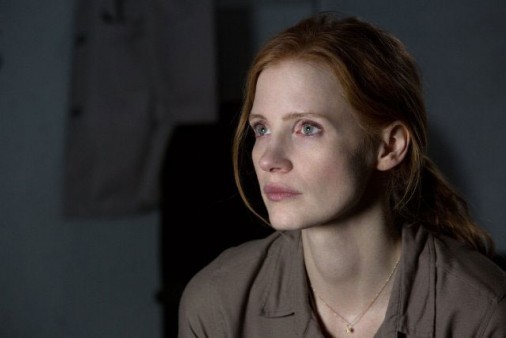 They find the compound, or actually the compound finds them, and they both get whisked into the underground bunker. It’s actually a fortress made up of scientists and engineers, let by Professor Brand (Caine). He leads the project for the search of a planet in perhaps another universe that can sustain the human race. A project which includes a newly built spaceship.

So Cooper (without the blessing of his daughter) and Brand’s scientist daughter Amelia (Hathaway) and two others blast off into space, into the darkness, on a mission that seems impossible. But what Cooper doesn’t know is that 13 other astronauts had previously attempted the mission, and all have not been heard from since. And to add drama to the story, Amelia was in love with one of them.

It’s the space mission (and Cooper and Murph’s relationship) that drives Interstellar. And what a drive it is. Nolan takes us into space and beyond like no other filmmaker has. We are transported into another universe, through black holes, to other planets. One planet has waves the size of the Empire State Building, while another is caked in ice, where they find one of the 13 astronauts alive – Dr. Mann (Damon). And this is when Coopers’ and Amelia’s mission strays off it’s course, in a detrimental way. One hour on this planet equals 20 years on Earth, so the more time spent there, the more time Coopers children grow up, and old, without him. 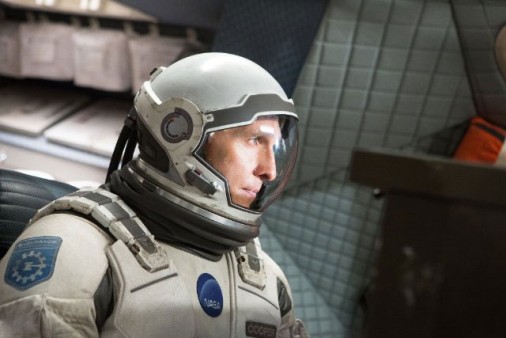 What Interstellar tries to do is use the magnitude and grandeur of space as a backdrop for exploring the relationships that Cooper has with his children, especially his daughter. It’s also about all kinds of things — our lives on earth, what will happen when our earth can no longer sustain us, who are are, and it makes us look at the relationships we have. It basically asks us to examine, all this, and more, in its 169 minutes. London born Nolan successfully puts the audience into space, and McConaughey successfully makes us believe that he’s got the passion to be in space, but Interstellar leaves us mere mortals behind in a film that is a bit overwhelming, mind bending, demanding and a bit confusing. And the sound quality is not the best, the music and noise at times drowns out what the characters are saying in a few crucial scenes. Plus with two recent air space accidents in the last couple weeks, no one is really in a rush to get to space. Written by Nolan and his brother Jonathan, Interstellar is a movie bigger than what it can handle, and what we can handle.